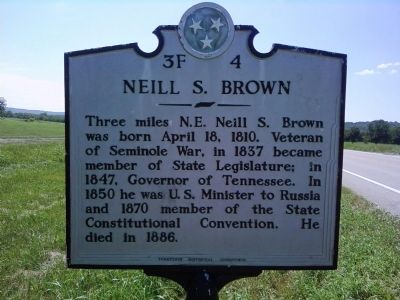 By Lee Hattabaugh, August 7, 2010
1. Neill S. Brown Marker
Inscription.
Neill S. Brown. . Three miles N.E. Neill S. Brown was born April 18, 1810. Veteran of Seminole War, in 1837 became member of State Legislature; in 1847, Governor of Tennessee. In 1850 he was U.S. Minister to Russia and 1870 member of the State Constitutional Convention. He died in 1886. . This historical marker was erected by Tennessee Historical Commission. It is in Elkton in Giles County Tennessee

Topics and series. This historical marker is listed in this topic list: Wars, US Indian. In addition, it is included in the Tennessee Historical Commission series list.

Location. 35° 5.283′ N, 86° 55.75′ W. Marker is in Elkton, Tennessee, in Giles County. Marker is on Elkton Pike (U.S. 31) north of Newman Road, on the left when traveling north. Marker is located just south of the northern city limits sign. Touch for map. Marker is in this post office area: Elkton TN 38455, United States of America. Touch for directions.

Other nearby markers. At least 8 other markers are within 9 miles of this marker, measured as the crow flies. John Calvin Brown (here, next to this marker); Elkton Bridge (approx. 3.7 miles away); First Section of Tennessee Interstate (approx. 4.6 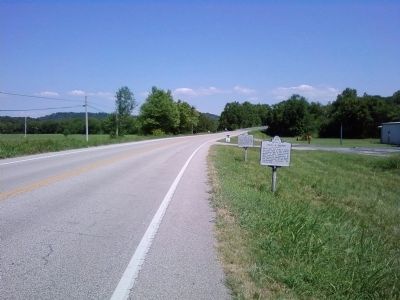