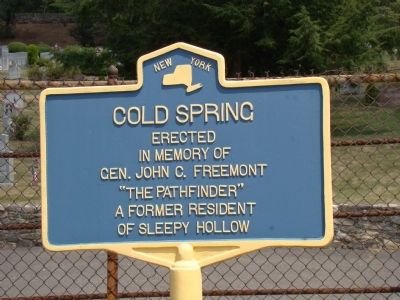 Erected in memory of Gen. John C. Freemont “The Pathfinder” a former resident of Sleepy Hollow.

Topics. This historical marker is listed in these topic lists: Exploration • War, Mexican-American • War, US Civil.

Location. 41° 6′ N, 73° 51.667′ W. Marker is in Sleepy Hollow, New York, in Westchester County. Marker is on North Broadway (U.S. 9) north of Bellwood Avenue, on the right when traveling north. It is in a large indentation of the Sleepy Hollow Cemetery wall that runs alongside Route 9. There is plenty of space to pull in in your car when driving north, but you can easily pass it without noticing. Touch for map. Marker is in this post office area: Tarrytown NY 10591, United States of America. Touch for directions. 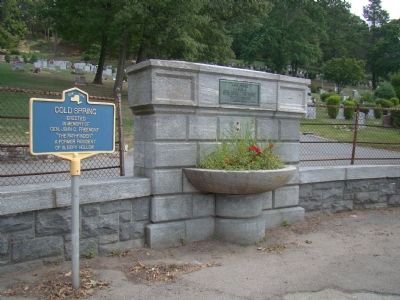 More about this marker. The marker misspells his name, which was John C. Fremont.

Regarding Cold Spring. The fountain was erected in honor of John Charles Frémont (1813–1890), who died in Sleepy Hollow. He was a Civil War Union General, U.S. Presidential candidate, western explorer, Lt. Colonel in the Mexican American War, military Governor of California. With Kit Carson as guide he led expeditions west across the South Pass, the Oregon Trail, and through the Sierra Nevada. He was the first American to see Lake Tahoe. His reports and maps enabled the migration west.

Also see . . .  Wikipedia Entry. “Early in June 1862 Frémont pursued the Confederate Gen. Stonewall Jackson for eight days, finally engaging him at Battle of Cross Keys on June 8. Jackson slipped away after the battle, saving his army. When the Army of Virginia was created June 26, to include Gen. Frémont’s corps, with John Pope in command, Frémont declined to serve on the grounds that he was senior to Pope and for personal reasons. He then went to New York where he remained throughout the war, expecting a command, but none was given to him.” (Submitted on August 21, 2010.)
Credits. This page was last revised on June 16, 2016. It was originally submitted on August 21, 2010, by J. J. Prats of Powell, Ohio. This page has been viewed 970 times since then and 16 times this year. Photos:   1, 2. submitted on August 21, 2010, by J. J. Prats of Powell, Ohio.
Share This Page.