in the Homeport of Naval History 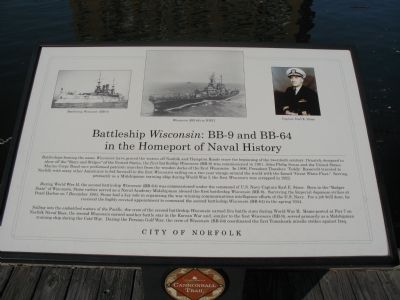 Battleships bearing the name Wisconsin have graced the waters off Norfolk and Hampton Roads since the beginning of the twentieth century. Ornately designed to show-off the “Stars and Stripes” of the United States, the first battleship Wisconsin (BB-9) was commissioned in 1901. John Philip Sousa and the United States Marine Corps Band once performed patriotic marches from the wooden decks of the first Wisconsin. In 1906, President Theodore “Teddy” Roosevelt traveled to Norfolk with many other Americans to bid farewell to the first Wisconsin sailing on a two year voyage around the world with the famed “Great White Fleet.” Serving primarily as a Midshipman training ship during World War I, the first Wisconsin was scrapped in 1922. 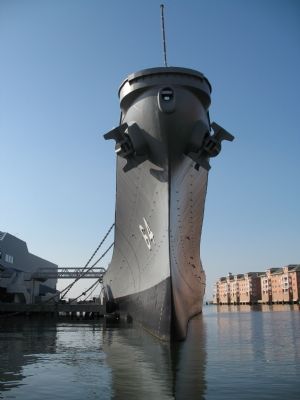 Click or scan to see
this page online
Pearl Harbor on 7 December 1941, Stone had a key role in organizing the war-winning communications intelligence efforts of the U.S. Navy. For a job well done, he received the highly coveted appointment to command the second battleship Wisconsin (BB-64) in the spring 1944.

Sailing into the embattled waters of the Pacific, the crew of the second battleship Wisconsin earned five battle stars during World War II. Home-ported at Pier 7 on Norfolk Naval Base, the second Wisconsin earned another battle star in the Korean War and, similar to the first Wisconsin (BB-9), server primarily as a Midshipman training ship during the Cold War. During the Persian Gulf War, the crew of Wisconsin (BB-64) coordinated the first Tomahawk missle strikes against Iraq.

Erected by City of Norfolk.

Topics and series. This historical marker is listed in this topic list: Military. In addition, it is included in the Virginia, Norfolk Heritage Cannonball Trail series list. A significant historical date for this entry is December 7, 1941.

Location. 36° 50.862′ N, 76° 17.654′ W. Marker is in Norfolk, Virginia. Marker can be reached from the intersection of Waterside Drive and Boush Street. This marker sits on the dock that houses the Battleship Wisconsin. Touch for map. Marker is at or near this postal address: 1 Waterside Dr, Norfolk VA 23510, United States of America. Touch for directions. 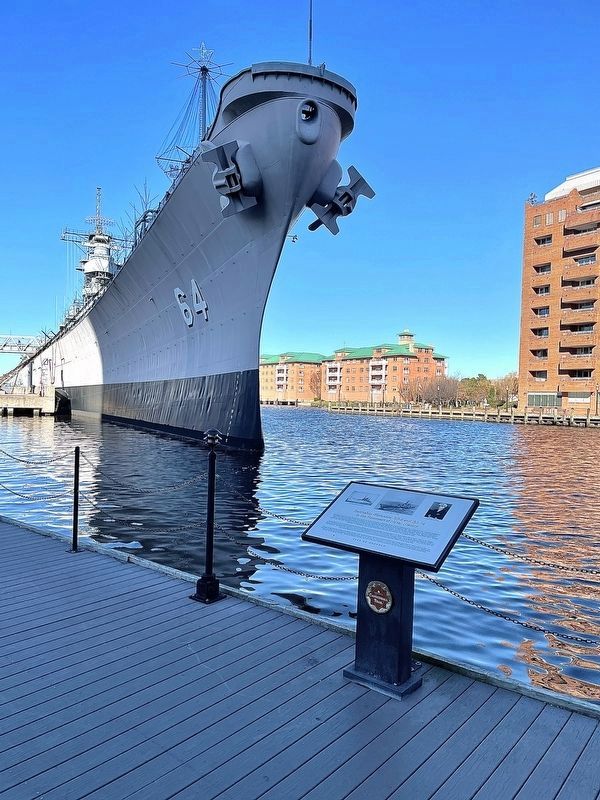 More about this marker. This marker is part of the Norfolk Heritage Cannonball Trail