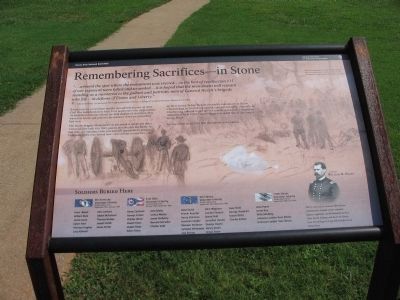 "...around the spot where the monument was erected...to the best recollection 113 of our regiment were killed and wounded...it is hoped that the monument will remain standing as a memorial to the gallant and patriotic men of General Hazen's brigade who fell...in defense of Union and Liberty."
Edward Crebbin, 1st Lieutenant, 9th Indiana Volunteer Infantry, in charge of building the Hazen Monument in 1863

It may surprise you to learn that the monument you see on most Civil War battlefields were built 30 or more years after Appomattox. As battlefield veterans entered the final chapter of their lives, they wanted to honor and preserve the memory of the sacrifices they had seen.

The Hazen Brigade Monument you see ahead is unlike any other. Union soldiers built it in 1863, just six months after the battle. At that time, the outcome of the war was still impossible to predict. Comrades of the men buried here - not civilian contractors - laid up these stones. Before the famous marble monuments at Shiloh, Chickamauga, or Gettysburg existed, travelers riding the Nashville & Chattanooga railroad would see this somber stonework - a 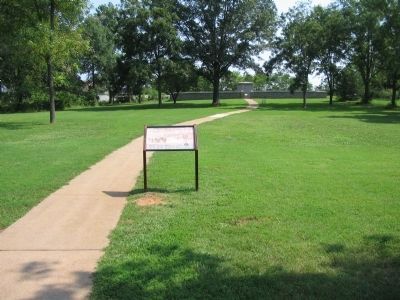 By Craig Swain, August 28, 2010
2. Marker with the Cemetery and Monument in the Background
constant reminder of what it cost Hazen's Brigade to stand fast all day long at Stones River.

It is the oldest intact Civil War monument in the nation. 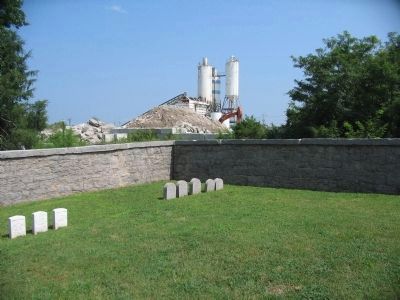 By Craig Swain, August 28, 2010
3. Cemetery and Preservation
The cemetery lays, as it did during the war, aside the railroad line. Beyond the railroad line is a concrete vendor's mixing plant. As often pointed out, the progress of the present has often overshadowed the memories of the past. This view is often used by preservation groups, citing the incalculable cost of the damage to historically significant landscapes.
no-nonsense West Pointer commanded a brigade of four volunteer infantry regiments: the 6th Kentucky, the 41st Ohio, the 9th Indiana, and the 110th Illinois. Over 400 of Hazen's troops fell in battle here at Stones River.

Location. 35° 52.575′ N, 86° 25.681′ W. Marker is in Murfreesboro, Tennessee, in Rutherford County. Marker is on Old Nashville Highway, on the right when traveling north. Located at tour stop five, the Round Forest, in Stones River National Battlefield Park. Touch for map. Marker is in this post office area: Murfreesboro TN 37129, United States of America. Touch for directions.