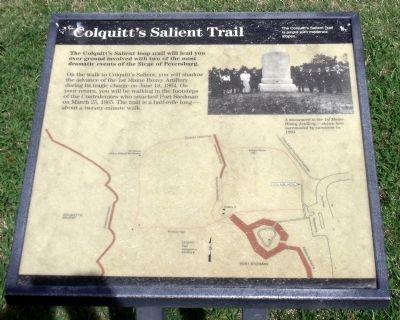 The Colquitt’s Salient loop trail will lead you over ground involved with two of the most dramatic events of the Siege of Petersburg.

On the walk to Colquitt’s Salient, you will shadow the advance of the 1st Maine Heavy Artillery during its tragic charge on June 18, 1864. On your return, you will be walking in the footsteps of the Confederates who attacked Fort Stedman on March 25, 1865. The trail is a half-mile long — about a twenty-minute walk.

The Colquitt’s Salient Trail is paved with moderate slopes.

Topics. This historical marker is listed in this topic list: War, US Civil. A significant historical date for this entry is March 25, 1865.

Other nearby markers. At least 8 other markers are within walking distance of this marker. Prince George Court House Road (within shouting 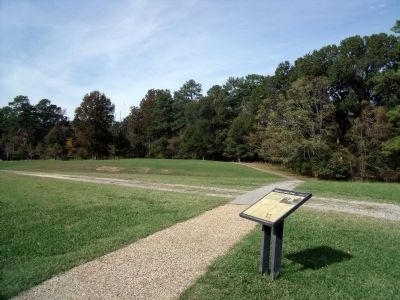 More about this marker. On the upper right is a photograph of "A monument to the 1st Maine Heavy Artillery — shown here surrounded by survivors in 1895."

On the lower half is a map of the loop trail.