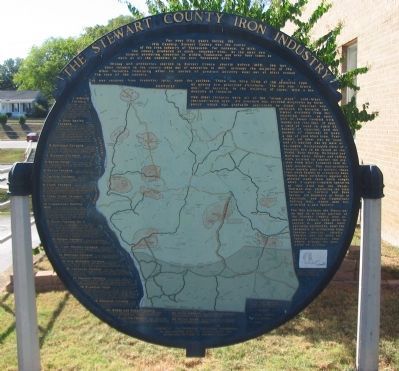 For over fifty years during the 19th Century, Stewart County was the center of the iron industry of Tennessee. For instance, in 1854, the county produced as much, tonnage-wise, as the next two largest producing counties in middle Tennessee and over four times as much as all the counties in the east Tennessee area.

Mining and production started in Stewart County shortly before 1828; the last blast furnace in the county went out of operation in 1927, although the majority of the other furnaces remaining after its period of greatest activity went out of blast around the turn of the century.

Ore was secured from orebodies lying near the surface. There was very little of the intensive type of mining now practiced elsewhere. The ore was "broke ore," or heratite, in the majority of the cases, with a few deposits of limonite.

The blast furnaces were all of the "stone stack" cold-blast charcoal-using type. Air pressure was secured originally by water power which was gradually supplanted by steam. Charcoal was obtained by burning the timber available from the adjoining woods, in open pits or heaps covered with leaves and coal dust. 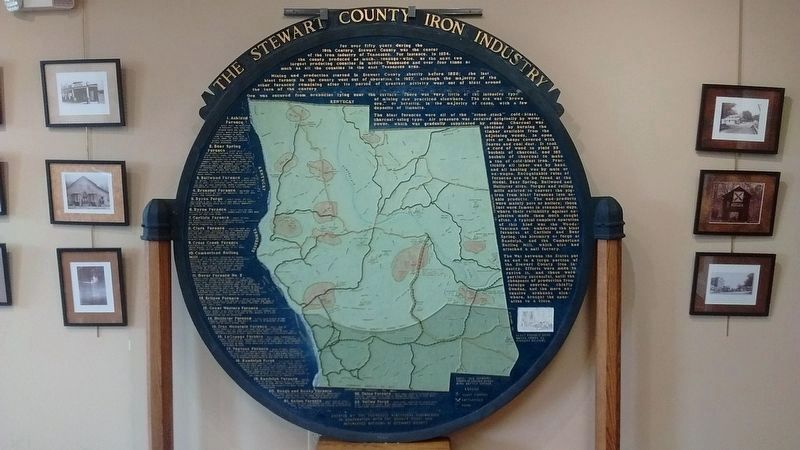 Click or scan to see
this page online
It took a cord of wood to yield 33 bushels of charcoal to make a ton of cold-blast iron. Practically all labor was by hand, and all hauling was by mule or ox-wagon. Recognizable ruins of furnaces are to be found at the Model, Bear Spring, Bellwood and Hollister sites. Forges and rolling mills existed to convert the pig-iron from blast furnaces into usable products. The end-products were mainly pots or boilers; these last were famous in steamboat days, where their reliability against explosion made them much sought after. A typical complete operation of this kind was the Woods-Yeatman one, embracing the blast furnaces at Carlisle and Bear Spring, the bloomary or forge at Randolph, and the Cumberland Rolling Mill, which also had attached a nail factory.

The War between the States put an end to a large portion of the Stewart County iron industry. Efforts were made to revive it, and these were partially successful, until the cheapness of production from foreign sources, chiefly Sweden, and the more extensive orebanks elsewhere, brought the operation to a close.

(Points Indicated on the Map):
1. Ashland Furnace - Built 1851, by Hilister & Phillips, who used the stones from the Van Buren Stack, which had been built nearby in 1839. Nine ft. across the bosh, 35 ft. high. It went out of blast following the capture of Fort Donelson. 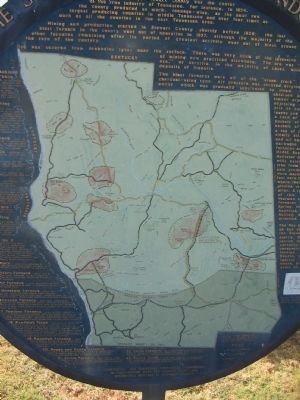 3. Bellwood Furnace - Built 1850 by Woods, Yeatman & Co. Nine ft. across bosh, 32 ft. high. It operated until the day following the fall of Fort Donelson, when a Federal gunboat destroyed it. Ruins of its stack still stand.

4. Brunsoni Furnace - Believed to have been built in 1828 by Brunson, its life was short and unimportant.

7. Carlisle Furnace - Built in 1841, by Woods, Yeatman & Co., it was abandoned and dismantled early in its existence, in favor of Dover Furnace No. 2, nearby.

8. Clark Furnace - built in 1855 and operated by Cobb, Phillips & Co., of standing rock nine and one-half feet across the bosh, with stack 34 ft. high. It discontinued regular 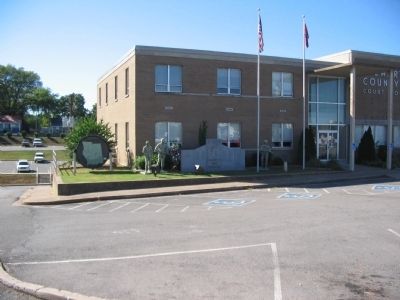 Photographed By Craig Swain, September 4, 2010
4. Iron Industry Marker and Veterans Memorials
operation in 1856, but was operated sporadically until 1861. Returned to blast in 1865, it finally closed about 1880.

10. Cumberland Rolling Mill - Built in 1829; operated by Woods, Lewis & Co. It had two puddling and seven heating furnaces, with four trans of steam-driven rolls, in 1856. It was destroyed by Federal gunboats following the fall of Fort Donelson. Following an attempt to rebuild, it was moved to Rock Castle, Ky., and renamed the Tennessee Rolling Mill. 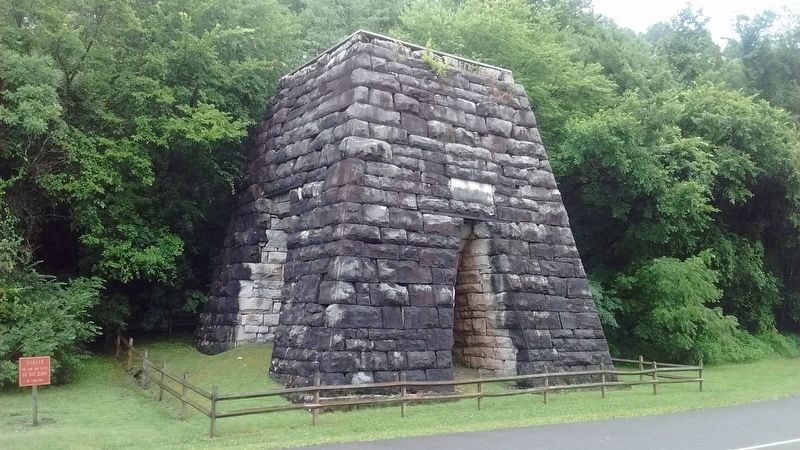 14. Hollister Furnace - Little data exists on this furnace, except that it was built in 1830. It is believed to have gone out of blast before 1861.

15. Iron Mountain Furnace - Built 1854 by Brian, Newell, & Co. About the same size as Great Western Furnace. Used ore from surface deposits only. Closed 1855, but re-opened briefly in 1859, when it was bought by Ledbetter & Bostick.

17. Peytona Furnace - Built in 1847, rebuilt in 1856; operated by Thomas Kirkman. Nine feet across the bosh. 42 ft. high. It operated until 1861-62. It was named for a famous Sumner County race mare, which once defeated and once lost to fashion in memorable match races in New York and New Jersey in 1845.

18. Randolph Forge - The first of these two forges was built about 1840. It had two forge and 18 knobling fires with two steam hammers. It took most of the pig output of Dover and Carlisle Furnaces, with which it was connected by "eight or nine miles of the finest cinder road in Tennessee," according to an authority in 1859. It closed with the destruction of its companion operation by Federals.

19. Randolph Furnace - Built 1837 by Woods, Yeatman & Co. It went out of blast in 1840 and two forges in succession occupied the locality on which it had been built.

23. Valley Forge - Built 1852; operated by Jordan Bros. & Co. It had one forge, seven knobling fires and one steam hammer. It shut down following Federal occupation.

Erected by the Tennessee Historical Commission in cooperation with the County Court and Interested Citizens of Stewart County.

Topics and series. This historical marker is listed in these topic lists: Industry & Commerce • War, US Civil . In addition, it is included in the Tennessee Historical Commission series list. A significant historical month for this entry is February 1862.