Engagement at the Forty Mile Creek 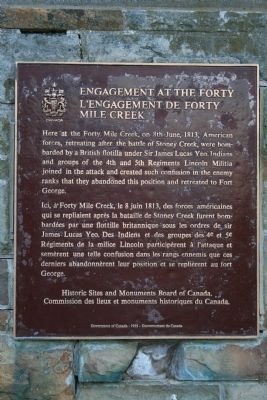 [English Text]: Engagement at the Forty

Here at the Forty Mile Creek, on 8th June, 1813, American forces, retreating after the Battle of Stoney Creek, were bombarded by a British flotilla under Sir James Lucas Yeo. Indians and groups of the 4th and 5th Regiments Lincoln Militia joined in the attack and created such confusion in the enemy ranks that they abandoned this position and retreated to Fort George.

Topics. This historical marker is listed in this topic list: War of 1812. A significant historical date for this entry is June 8, 1813. 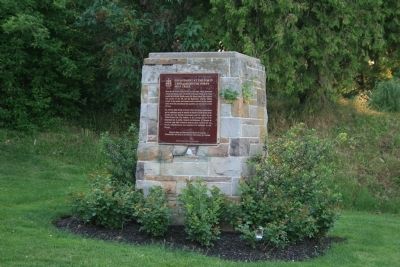 Click or scan to see
this page online
43° 12.249′ N, 79° 33.222′ W. Marker is in Grimsby, Ontario, in Niagara Region. Marker is on Elizabeth Street just north of Lakeside Drive, on the left when traveling north. This historic marker is located at the entrance to a community lakeside park. Touch for map. Marker is in this post office area: Grimsby ON L3M 3K8, Canada. Touch for directions.

More about this marker. According to a great site on Ontario's Historic Markers (sponsored by a gentleman named Wayne Cook) this historic marker is located at Grimsby Waterworks Park. I went there expecting to find a water/splash park but it was more of a waterfront, fishing, picnicking, and boat ramp type of a park with a very scenic garden and gazebo.
The park is located on the Lake Ontario shoreline, on the western side of the mouth of Forty Mile Creek, and the park contains some additional War of 1812, bicentennial, commemorative historic markers. 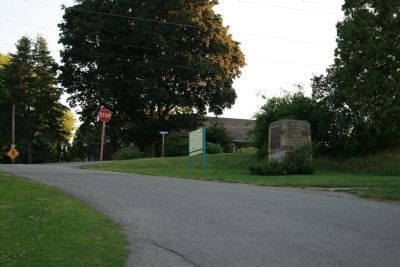 Photographed By Dale K. Benington, June 10, 2012
3. Engagement at the Forty Marker
View looking south (from the park's parking lot) of the historic marker, and in the distant background is seen the intersection of Elizabeth Street with Lakeside Drive. 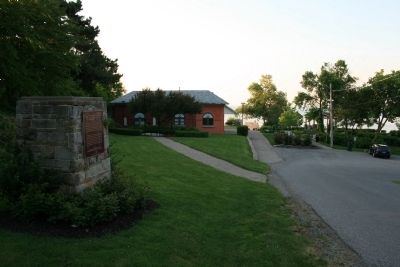 Photographed By Dale K. Benington, June 10, 2012
4. Engagement at the Forty Marker
View of the historic marker looking north toward the community recreational park and Lake Ontario. 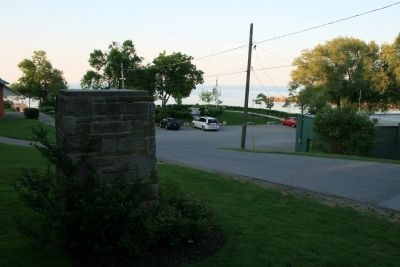 Photographed By Dale K. Benington, June 10, 2012
5. Engagement at the Forty Marker
View of the backside of the historic marker, looking northeast toward the mouth of Forty Mile Creek. 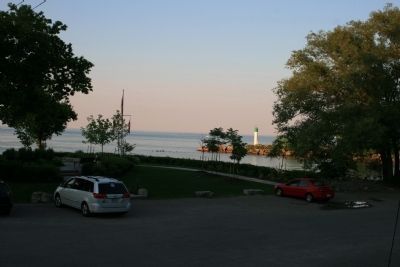