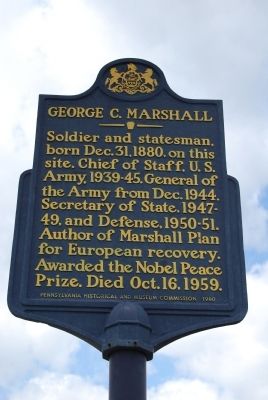 Photographed By Mike Wintermantel, April 17, 2011
1. George C. Marshall Marker
Inscription.
George C. Marshall. . Soldier and statesman, born December 31, 1880, on this site. Chief of Staff, United States Army, 1939-45. General of the Army from December 1944. Secretary of State, 1947-49, and Defense, 1950-51. Author of Marshall Plan for European recovery. Awarded the Nobel Peace Prize. Died October 16, 1959. . This historical marker was erected in 1981 by Pennsylvania Historical and Museum Commission. It is in Uniontown in Fayette County Pennsylvania

Topics and series. This historical marker is listed in this topic list: Military. In addition, it is included in the Pennsylvania Historical and Museum Commission series list. A significant historical month for this entry is October 1762.

Location. 39° 54.053′ N, 79° 43.838′ W. Marker is in Uniontown, Pennsylvania, in Fayette County. Marker is on West Main Street (U.S. 40) 0.1 miles west of North Arch Street, on the right when traveling west. Located across West Main Street,(historic US 40, one way street looking west), in the direction of the George C. Marshall Memorial Plaza, less than a half mile further. (Not visible from US 40 east, which divides US 40, Main Street, west, and Fayette Street one way going east. 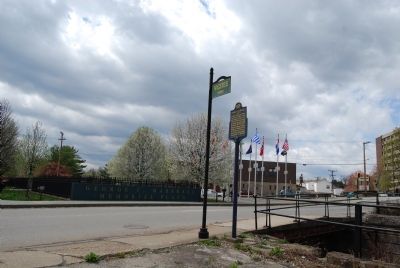 Click or scan to see
this page online
Touch for map. Marker is in this post office area: Uniontown PA 15401, United States of America. Touch for directions.

Additional commentary.
1. Marshall Plaza Uniontown
I believe the statue in Marshall Plaza is not Marshall, but is a WWI memorial for all Soldiers, for whom Marshall was always greatly concerned; (as a youth I used to help maintain the grounds of that 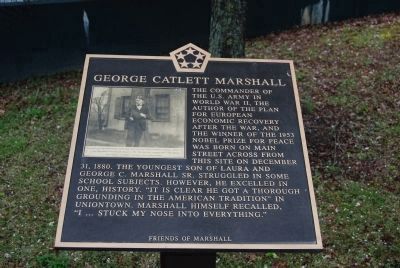 Photographed By Mike Wintermantel, April 17, 2011
3. George Catlett Marshall
The Commander of the U.S. Army in World War II, the author of the plan for European economic recovery after the war and the winner of the 1953 Nobel Prize for peace was born on Main Street across from this site on December 31, 1880. The youngest son of Laura and George C. Marshall Sr. struggled in some school subjects. However, he excelled in one, history. "It is clear he got a thorough grounding in the American tradition" in Uniontown. Marshall himself recalled, "I...stuck my nose into everything."
memorial). I believe the flags in the Plaza are those of the nations the that participated in the Marshall Plan,(which should be mentioned). It should be pointed out that Germany -- Deutchland -- was perhaps the most appreciative; (at the prompting of German Jewish refugee, Guido Goldman), Germany funded for 15 years at 150M DM German Marshall Fund to foster "better understanding," later extended another 10 years. Note To Editor only visible by Contributor and editor
— Submitted July 2, 2012, by Charles F Adams of Born Uniontown, Now Philadelphia, Pennsylvania. 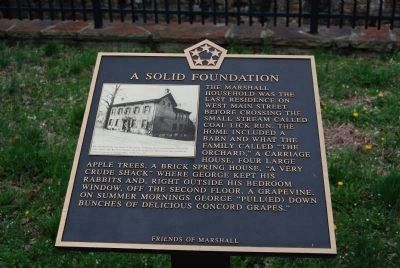 Photographed By Mike Wintermantel, April 17, 2011
4. A Solid Foundation
The Marshall household was the last residence on West Main Street before crossing the small stream called Coal Lick Run. The home included a barn and what the family called "the orchard," a carriage house, four large apple trees, a brick spring house, "a very crude shack" where George kept his rabbits and , right outside his bedroom window, off the second floor, a grapevine. On summer mornings George pull(ed) down bunches of delicious concord grapes. 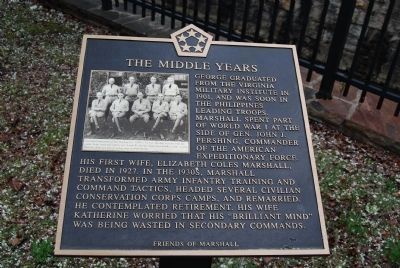 Photographed By Mike Wintermantel, April 17, 2011
5. The Middle Years
George graduated from the Virginia Military Institute in 1901, and was soon in the Philippines leading troops. Marshall spent part of World War I at the side of Gen. John J. Pershing, Commander of the American Expeditionary Force. His first wife, Elizabeth Coles Marshall, died in 1927. In the 1930S, Marshall transformed Army Infantry training and command tactics, headed several civilian conservation corps camps, and remarried. He contemplated retirement. His wife Katherine worried that his "brilliant mind" was being wasted in secondary commands. 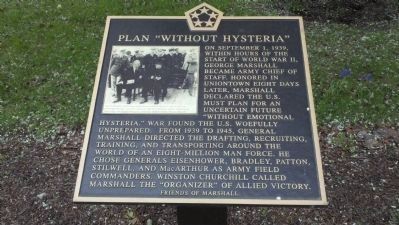 Photographed By Mike Wintermantel, April 17, 2011
6. Plan "Without Hysteria"
On September 1, 1939, within hours of the start of World War II, George Marshall became Army Chief of Staff. Honored in Uniontown eight days later, Marshall declared the U.S. must plan for an uncertain future "without emotional hysteria." War found the U.S. woefully unprepared. From 1939 to 1945, General Marshall directed the drafting, recruiting, training, and transporting around the world of an eight-million man force. He chose Generals Eisenhower, Bradley, Patton, Stilwell, and MacArthur as Army Field Commanders. Winston Churchill called Marshall the "organizer" of Allied victory. 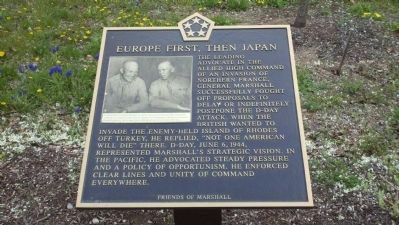 Photographed By Mike Wintermantel, April 17, 2011
7. Europe First, Then Japan
The leading advocate in the Allied High Command of an invasion of Northern France, General Marshall successfully fought off proposals to delay or indefinitely postpone the D-Day attack. When the British wanted to invade the enemy-held island of Rhodes off Turkey, he replied, "not one American will die" there. D-Day, June 6, 1944, represented Marshall's strategic vision. In the Pacific, he advocated steady pressure and a policy of opportunism. He enforced clear lines and unity of command everywhere. 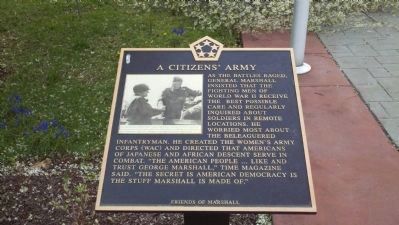 Photographed By Mike Wintermantel, April 17, 2011
8. A Citizens' Army
As the battles raged, General Marshall insisted that the fighting men of World War II receive the best possible care and regularly inquired about soldiers in remote locations. He worried most about the beleaguered infantrymen. He created the Women's Army Corps (WAC) and directed that Americans of Japanese and African descent serve in combat. "The American people...like and trust George Marshall," Time Magazine said. "The secret is American democracy is the stuff Marshall is made of." 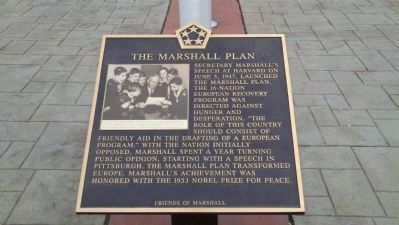 Photographed By Mike Wintermantel, April 17, 2011
9. The Marshall Plan
Secretary Marshall's speech at Harvard on June 5, 1947, launched The Marshall Plan. The 16-nation European Recovery Program was directed against hunger and desperation. "The role of this country should consist of friendly aid in the drafting of a European program." with the nation initially opposed, Marshall spent a year turning public opinion, starting with a speech in Pittsburgh. The Marshall Plan transformed Europe, Marshall's achievement was honored with the 1953 Nobel Prize for peace. 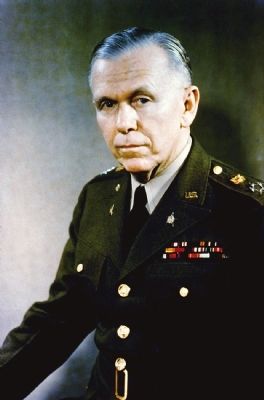 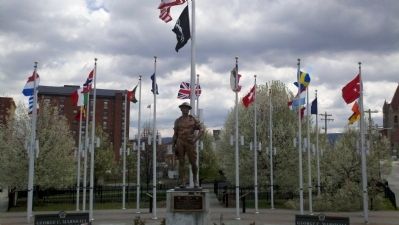 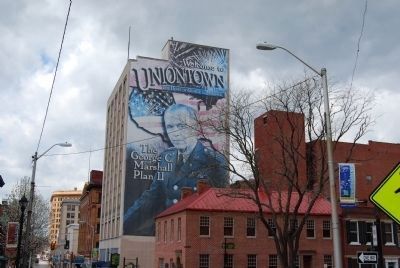