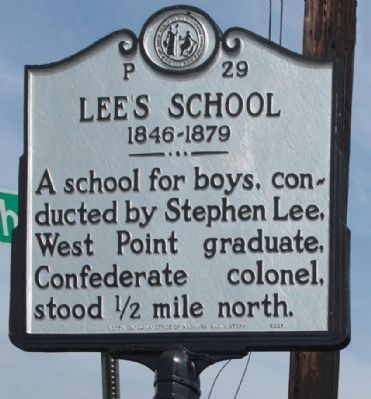 Photographed By Mike Stroud, May 19, 2012
1. Lee's School Marker
Inscription.
Lee's School. A school for boys, conducted by Stephen Lee, West Point graduate, Confederate colonel, stood ½ mile north. . This historical marker was erected in 2007 by North Carolina Office of Archives and History. It is in Asheville in Buncombe County North Carolina

Topics and series. This historical marker is listed in these topic lists: Education • War, US Civil. In addition, it is included in the North Carolina Division of Archives and History series list. A significant historical year for this entry is 2007.

Location. Marker has been reported permanently removed. It was located near 35° 35.697′ N, 82° 31.93′ W. Marker was in Asheville, North Carolina, in Buncombe County. Marker was at the intersection of Tunnel Road (U.S. 70 / 74) and Chunn's Cove Road, on the right when traveling west on Tunnel Road. Touch for map. Marker was in this post office area: Asheville NC 28805, United States of America. Touch for directions. 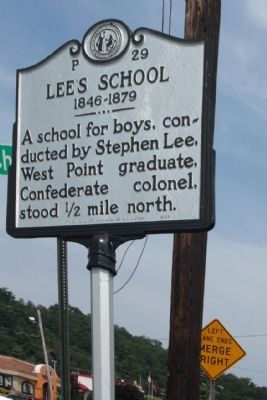 Regarding Lee's School. In 1846, Stephen Lee, a former professor of mathematics at the College of Charleston, opened a school for boys along the Swannanoa River near Asheville. The academy remained opened until 1879 and was highly regarded in the region for its academic rigor. Many of the pupils were the scions of distinguished South Carolina families. The identity of the individual teachers is unclear; however, Lee himself taught mathematics and literature.
Lee was born on June 7, 1801 to Judge Thomas and Kezia Lee of Charleston, South Carolina. In 1819 he entered the United States Military Academy at West Point. He resigned two years later despite being ranked fifth in his class at the time. The exact reason for his resignation is unknown, as are his whereabouts from 1821 to 1825. In 1826, Lee entered the College of Charleston, where he graduated 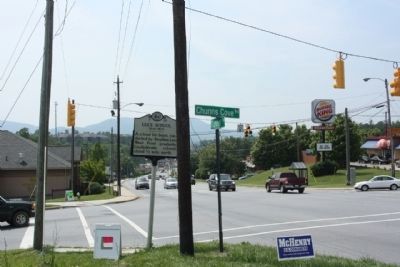 Photographed By Mike Stroud, May 19, 2012
3. Lee's School Marker at the Tunnel Road (U.S. 70 / 74) and Chunn's Cove Road intersection
in 1828. After studying law with his father, Lee opened a legal practice in Charleston. Family tradition states that he left the profession after successfully defending a man on charges of murder whom he fully believed to be innocent. After the man’s acquittal the accused confessed to Lee that he was indeed guilty.
Lee turned from law to education, and in 1835 became a professor of mathematics at the College of Charleston. Nine years later he opened his school in Buncombe County. At the outbreak of the Civil War, Lee was elected colonel of both the 15th and 16th North Carolina Troops but chose to command the later regiment. Taking command on June 17, 1861, Lee led his regiment in the western Virginia campaigns of the summer and fall of 1861 against Union forces led by George McClellan. In the winter 1861-1862, the 16th was assigned to a brigade of Georgians and South Carolinians stationed at Dumfries, Virginia. On February 13, 1862, sixty-one year old Lee resigned on account of “old age, and swelling of the legs.”
Lee returned to Buncombe County and began teaching again, but in 1864 organized many of his students and
local elderly men into a reserve unit called the Silvery Greys. Officially they became known as Captain Lee’s Local Defense Company. On April 3, 1865, Lee and forty-four of his Silver Greys aided Colonel George W. Clayton and the 62nd North Carolina Troops in defeating a Union brigade at the Battle of Asheville.
After the war, Lee resumed teaching, and in 1869 began farming “bright yellow” leaf tobacco. Prior to the war Lee had married his first cousin, Caroline Lee, with whom he had fifteen children. After Caroline’s death in 1856, Lee married Sara Rosanne Patton Morrison, with whom he had one more child. Nine of Lee’s sons fought alongside him in the Civil War. Four of them died, and another lost an arm. Lee himself died of heart failure on August 2, 1879, and was buried in Riverside Cemetery. With its founder and main benefactor dead, Lee’s school closed its doors shortly thereafter. (North Carolina Dept. of Cultural Resources)