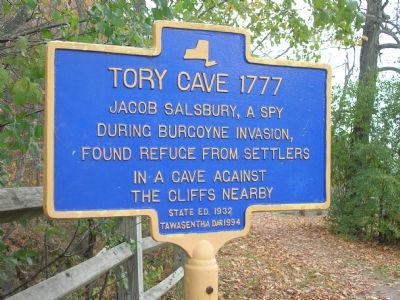 By Howard C. Ohlhous, November 5, 2007
1. Tory Cave Marker
Inscription.
Tory Cave 1777. . Jacob Salsbury, a spy during Burgoyne Invasion, found refuge from settlers in a cave against the cliffs nearby. . This historical marker was erected in 1994 by New York State Education Department and Tawasentha Daughters of the American Revolution. It is Near Voorheesville in Albany County New York

Jacob Salsbury, a spy during Burgoyne Invasion, found refuge from settlers in a cave against the cliffs nearby.

Topics and series. This historical marker is listed in this topic list: War, US Revolutionary. In addition, it is included in the Daughters of the American Revolution series list.

Location. 42° 39.328′ N, 74° 1.012′ W. Marker is near Voorheesville, New York, in Albany County. Marker can be reached from Thacher Park Road (New York State Route 157). This marker is not viewable from the roadway. It is located beside the Indian Ladder Trail trailhead near the Indian Ladder Picnic Area within John Boyd Thacher State Park. Touch for map. Marker is at or near this postal address: 1 Hailes Cave Road, Voorheesville NY 12186, United States of America. Touch for directions. 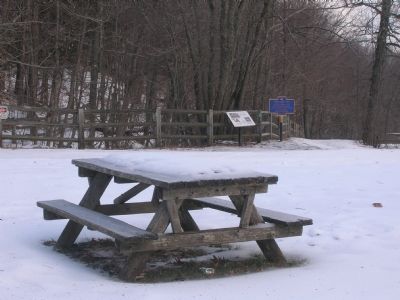 More about this marker. In 1994, the Tawasentha DAR chapter replaced the original 1932 marker that had been stolen from its place above the cave. The marker was dedicated on May 12.

Regarding Tory Cave 1777. The Tory House: In 1777, during the American Revolution, a British Loyalist, or Tory, named Jacob Salisbury, led raids on patriot farms in the valley below the Helderburg Ecaparpment. After burning and looting, the raiders escaped to this well-hidden cave. Smoke rising though the cave's natural chimney eventually drew a search party here. The story is told that Salisbury was captured, tried and hanged in this hidout, which then became known as the "Tory House." 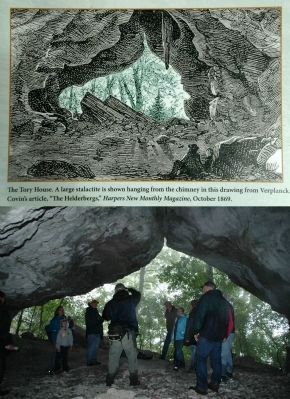 By Howard C. Ohlhous, September 14, 2014
3. The Tory Cave
During the Thacher Park centennial celebration on Saturday, September 13, 2014, park visitors were given a rare opportunity to visit the Tory Cave. Verplanck Colvin's illustration of the "Tory House" published in 1869, shown at the top, compares reasonably with what is there now.
John Boyd Thacher State Park, in Albany County, New York is situated along the Helderberg Escarpment, which rises a sharp 1,100 feet and is know as one of the richest fossil-bearing geological formations in the world.

The park is named after Albany mayor, and New York state senator John Boyd Thacher who purchased the land for preservation, thereby safeguarding six miles of limestone cliff-face, rock-strewn slopes. It was Mayor Thacher's widow, Emma Treadwell Thacher, who donated the land to the state of New York in 1914.

Today the park protects over 1800 acres, and a highlight of a visit to Thatcher is the short hike along the Indian Ladder Trail. The Indian Ladder Trail was origionally created by in the mid-18th century by the feuding Mohawk and Mohican Indian tribes when they built a ladder out of a felled tree to traverse the escaprments's tall cliffs so that they could band together as European settlers threatened their way of life on the eve of the French and Indian war. It has also been described as the trail used by Mohawk Iroquois Indians to reach Henry Hudson's trading post.
— Submitted February 4, 2008. 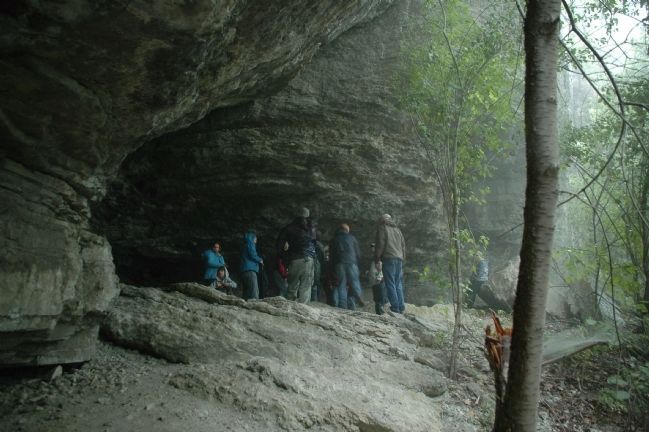 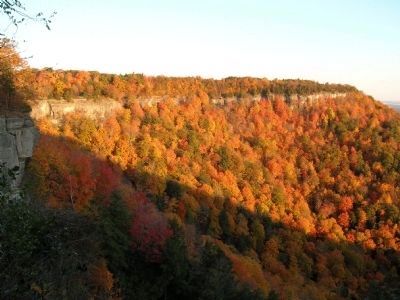