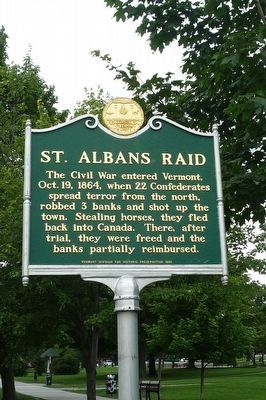 Photographed By Richard E. Miller, July 4, 2009
1. St. Albans Raid Marker
Inscription.
St. Albans Raid. . , The Civil War entered Vermont, October 19, 1864, when 22 Confederates spread terror from the north, robbed three banks and shot up the town. Stealing horses, they fled back into Canada. There, after trial, they were freed and the banks partially reimbursed. . This historical marker was erected in 1990 by Vermont Division for Historic Preservation. It is in St. Albans in Franklin County Vermont

The Civil War entered Vermont, October 19, 1864, when 22 Confederates spread terror from the north, robbed three banks and shot up the town. Stealing horses, they fled back into Canada. There, after trial, they were freed and the banks partially reimbursed.

Topics. This historical marker is listed in this topic list: War, US Civil. A significant historical date for this entry is October 19, 1864.

Location. 44° 48.682′ N, 73° 4.997′ W. Marker is in St. Albans, Vermont, in Franklin County. It is in . Marker is on South Main Street (U.S. 7) north of Fairfield Street (Vermont Route 36), on the right when traveling north. Marker is off Hwy. 7 between Fairfield and Bank Streets on the west side of Taylor Park. Touch for map. Marker is in this post office area: Saint Albans VT 05478, United States of America. Touch for directions. 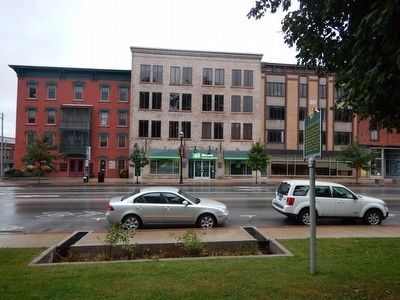 Photographed By Kevin Craft, September 14, 2015
2. Wideview of St. Albans Raid Marker
"Another St. Albans Raid marker" is visible across the street, to the left of the bank entrance

Additional commentary.
1. "Northernmost Engagement"
Two other locations claim to be the "northernmost battles" of the Civil War(See related markers). The marker here at St. Albans does not directly make such claim, but markers in Ohio and Iowa do.

Truth be known, NONE of these locations are properly the northernmost Civil War action. That distinction 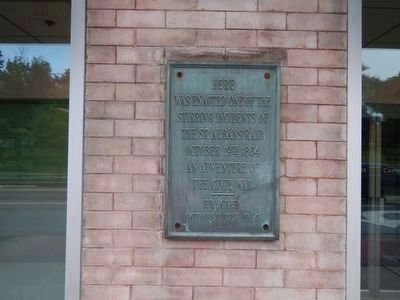 Photographed By Kevin Craft, September 14, 2015
3. Another St. Albans Raid Marker
Across the street, affixed to the wall of the TD Bank:
Here
Was Enacted One Of The
Stirring Incidents Of
The St. Albans Raid
October 19th 1864
An Adventure Of
The Civil War
Erected October 19th 1914
goes to an action fought on June 27, 1865 off the coast of St. Lawrence Island, in the Bering Sea, now part of Alaska. Yes, well after the surrender of troops on land, a Confederate privateer named the CSS Shenandoah captured and burned Union whalers. Thus in addition to being the northernmost and westernmost, the action was among the last battle of the Civil War. (And the CSS Shenandoah also fought the easternmost and likely the southernmost actions of the war during her voyage.)
— Submitted March 15, 2011, by Craig Swain of Leesburg, Virginia. 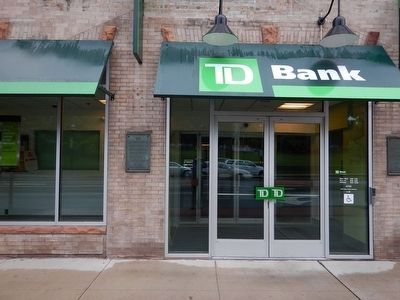 Photographed By Kevin Craft, September 14, 2015
4. Wideview of Another St. Albans Raid Marker
(to the left of the entrance) 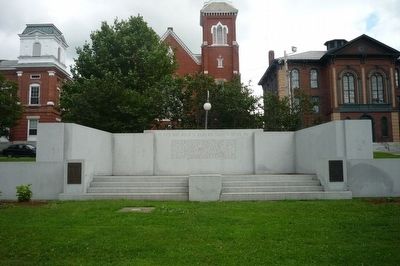