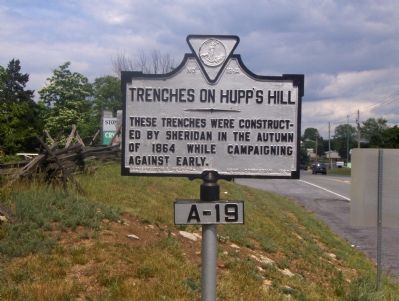 By Roger Dean Meyer, June 3, 2006
1. Trenches on Hupp's Hill
Inscription.
Trenches On Hupp’s Hill. . These trenches were constructed by Sheridan in the autumn of 1864 while campaigning against Early. . This historical marker was erected in 1927 by Conservation & Development Commission. It is Near Strasburg in Shenandoah County Virginia

These trenches were constructed by Sheridan in the autumn of 1864 while campaigning against Early.

Location. This marker has been replaced by another marker nearby. It was located near 39° 0.032′ N, 78° 20.765′ W. Marker was near Strasburg, Virginia, in Shenandoah County. Marker was on Valley Pike (U.S. 11) 0.1 miles south of Signal Knob Drive, on the right when traveling south. Touch for map. Marker was in this post office area: Strasburg VA 22657, United States of America. Touch for directions.

Related marker. Click here for another marker that is related to this marker. This marker has 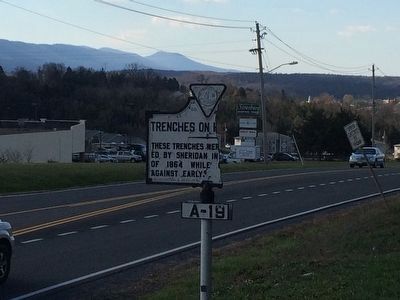 By Shane Oliver, November 14, 2015
2. Trenches On Hupp’s Hill Marker
One side of the marker is missing, making it difficult to read

Click or scan to see
this page online
been replaced by the linked marker. 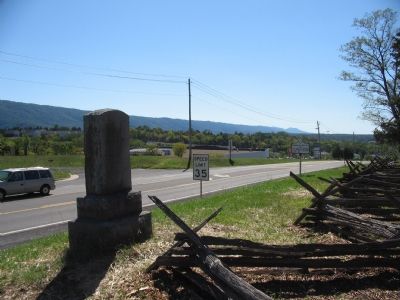 By Craig Swain, September 29, 2007
3. Trenches Marker beside the Valley Pike
The stone monument beside the marker is blank. It may be a sign for the entrance to the Stonewall Jackson Museum and Crystal Caverns. 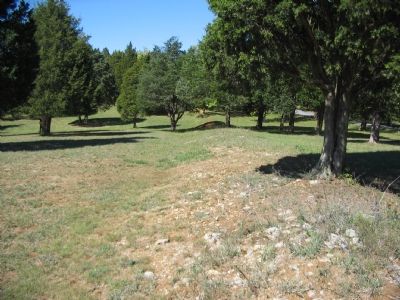