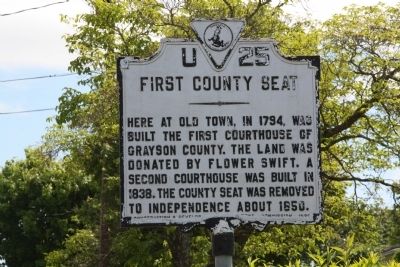 By J. J. Prats, May 26, 2013
1. First County Seat Marker
Inscription.
First County Seat. . Here at Old Town, in 1794, was built the first courthouse of Grayson County. The land was donated by Flower Switft. A second courthouse was built in 1838. The county seat was removed to Independence about 1850. . This historical marker was erected in 1930 by Conservation & Development Commission. It is in Oldtown in Grayson County Virginia

Here at Old Town, in 1794, was built the first courthouse of Grayson County. The land was donated by Flower Switft. A second courthouse was built in 1838. The county seat was removed to Independence about 1850. 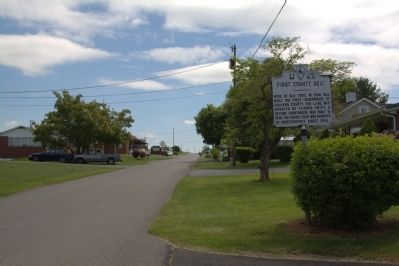 More about this marker. When the marker was erected, Greenville Road was U.S. Routes 58/221. Today Old Town is an isolated hamlet with no post office and no businesses whatsoever.

The Old Grayson County Courthouse is located in the community of Old Town, Grayson County, Virginia. Built in 1834, the Courthouse sits on approximately 0.66 of an acre near the intersection of Greenville Road (SR 640) and Justice Road (SR 634). The brick courthouse is a two-story central block with flanking two-story wings and a one-story addition on the rear north side which was built in the 1870s and expanded in 1988.

The Old Clerk’s Office, built in 1810, is a simple one-room brick structure that sits diagonally across the road from the courthouse on -0115 of an acre on the southwest corner of Greenville Road (SR 640) and Justice Road (SR 634). It has two means of egress, one on the east elevation and the other on the south elevation.

Statement of Significance. The Old Grayson County Courthouse and Clerk’s Office, Old Town, Virginia, is located in eastern Grayson County. It is eligible under Criterion A 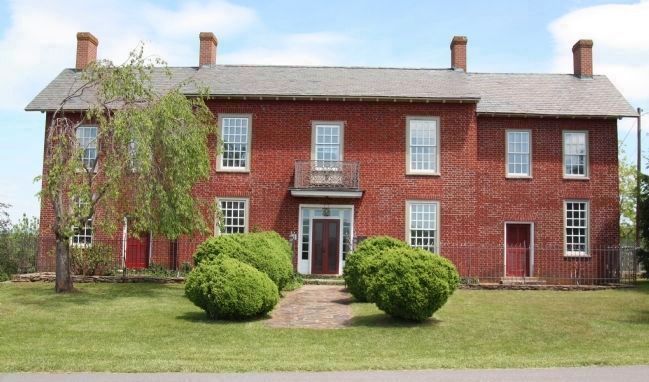 By J. J. Prats, May 26, 2013
3. Grayson County's 1838 Courthouse
County courthouse until 1850 when the county seat was moved to Independence. Today it is a private residence NOT OPEN to the public. Marker is across the narrow road behind the photographer.
because of its association with the evolution and growth of Grayson County and the formation of Carroll County, Virginia. Moreover, it is an excellent surviving example of the work of Master Builder, James Toncray, the premier builder of courthouses of this period in Southwest Virginia, thus eligible under Criterion C. These two buildings are the primary components of the first civic complex of Grayson County. Both buildings have retained most of their structural and contextual integrity. The Old Clerk's Office, built in 1810, was the first clerk's office in Grayson County while the Courthouse, built in 1834, was the county’s third structure for this use.

Historical Background. In 1792, the Virginia General Assembly voted to form Grayson County from Wythe County. The first meeting of the Grayson County Court was held in a double corncrib barn which belonged to Wm. Bourne, one of the founders of Grayson County.

In 1799, Charles Nuckolls and Flower Swift conveyed 90 acres they owned in the center of the county to Minitree Jones and Matthew Dickey, commissioners, for the "Publick" of Grayson County. The commissioners under the order of the county divided this land into half-acre lots which would become the county seat. The town was called Greenville, and is also known as Grayson Court House. On the north side of the Main Street (Greenville Road) in the 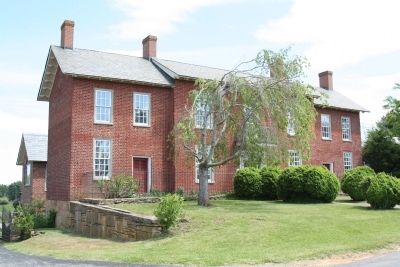 By J. J. Prats, May 26, 2013
4. Grayson County's 1838 Courthouse
center of the town a log structure was built. It became the second courthouse of Grayson County. It has long since disappeared.

In 1810, Martin Dickenson, the second Clerk of the County, built the Clerk’s Office on a secondary road (Justice Road) across from the Courthouse, which ran perpendicular to Main Street (Greenville Road). The two lots across from the log courthouse and Clerk’s Office had several owners between the years of 1799–1824. In 1824 Dickenson bought the lots and by 1826 sold the Clerk’s Office to the county only to own it again when he exchanged his two lots fronting the log courthouse for the Clerk's Office in 1833.

In that year, the county commissioners selected James Toncray to build the brick courthouse on the two lots. Toncray was the most prominent courthouse builder in Southwest Virginia, constructing the courthouses in Wythe County, (1818, demolished), Scott county (1829) Montgomery County and Floyd County at the same time he was building the Grayson County Courthouse.

These courthouses are similar in both form and appearance. Besides being built of brick and designed in the Federal style, the courthouses he designed had a tripartite composition with a two-story central block and flanking two-story wings. The symmetrical flanking wings were two bays long with a door in the inner bay. The Old Grayson Courthouse is 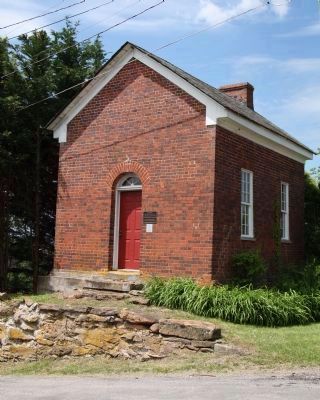 In 1834 the County began using the Courthouse in Greenville. In 1842 the Virginia General Assembly divided Grayson County and formed Carroll County from the eastern half. By 1848 after a six-year dispute on whether the county seat should stay in Greenville or be moved to a new centrally located site, the county government agreed to abandon the courthouse and relocate. In 1850 the county seat moved to its present location in Independence, and in 1854 the county sold the empty courthouse to William Dickenson. The Clerk's Office would later be sold to Creed Nuckolls. In 1855, Nuckolls also bought the courthouse structure.

From 1855 to 1871 the courthouse was used as a private residence. In 1871, then owner Mastin Hale sold the courthouse building to William P. Waugh who added the one-story ell addition and converted it into a hotel. It would serve in this capacity for nearly 40 years. The property was then sold to Harvey Williams who converted the building from a hotel to an apartment building.

During most of the 20th century, the courthouse changed ownership and uses, from an apartment building to a hay barn. In 1983 the current owners bought the courthouse from William D. Ring, and in 1988 began restoring and remodeling. In 1989 it was occupied 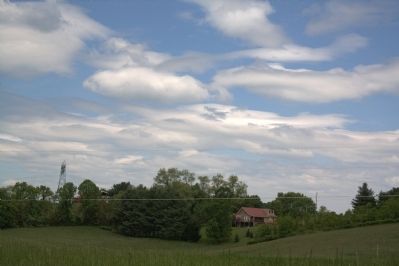 After the county offices were moved to Independence the Clerk’s Office served many uses as well, from a post office for Old Town to a dental office. During most of the 20th century it was used as a voting precinct for the eastern portion of Grayson County. In 1989 the county sold the Clerk's Office to [the owners of the former courthouse]. The Old Grayson Courthouse and Clerk’s Office are excellent examples of civic architecture in Southwest Virginia representing the late Federal Style and are significant monuments to the early governments of both Grayson and Carroll Counties of Virginia.

Architectural Analysis. The Old Grayson County Courthouse is an unusual antebellum courthouse design because it resembles a residence more than a public building. Constructed by master builder James Toncray, it is both simple and functional. The principal, south facing facade is symmetrical, with a tripartite massing scheme. The central block and the two flanking wings have gabled roofs; the pitch of the central block is more shallow than the wings. The building is one room wide and the second floor. matches the first floor. The central block facade is three bays wide. The entry has double doors, a simple transom and sidelights. A small iron balcony replaces a one-story wooden porch, which once sheltered the primary entry. A double-hung sash window is positioned over the entry where there once was a door leading onto the former porch. Flanking the central entry, there are double-hung sash windows on the first and second floors.

The two-story wings are very typical of Toncray's courthouses. The inner-bay of the two-bay wings have a single door on the first floor and a double-hung sash window on the second floor. The outer bay has double-hung sash windows on both floors. The window openings in the wings have jack arches that are 2 stretchers tall while the jack arches in the central block are only one stretcher tall.

The east and west gable ends are blank walls. The central block’s walls are laid in American running bond while the two wings were laid in Flemish bond. The building rests on a cut sandstone foundation.

The roof structure on the central block and the flanking wings date to the 1870s. The entire roof is covered with slate, and is supported by revealed rafters spaced approximately two feet on center. The slate was installed in 1988.

Behind the central-main entry, is the stair hall. On each side of the hall there are two rooms, one contained in the main building and one in the wing. In the western wing there, is a small stair that leads to the second floor. Each room except the central hall has a fireplace. These fireplaces are serviced by four symmetrically placed corbeled-cap chimneys.

All of the rooms have a beaded baseboard and a chair rail made of a beaded board with a small wood cove and beaded cap. The most distinctive architectural trimwork is the eight fireplace mantels. Each mantel is approximately five and a half feet tall, constructed of beaded boards with unique ovolo moldings below the mantel shelf. The walls are loadbearing brick walls covered with plaster except for the two central hall walls which are painted board partitions. All of the floors in the courthouse feature original heart pine.

Four bathrooms were added during the 1988 remodeling. One is under the hall stair, one is against the north wall of the first floor of the west wing, and two are on the second floor of the central block.

The rear (northside) of the courthouse has a one-story ell addition with a basement built in 1870 and expanded in 1988. Most of the addition was built in the 1870s when the structure was used as a hotel. The short leg of the ell was expanded in 1988 for a family room. The addition has a slate roof. A carport with a deck above it is to the north of this ell addition.

Across the street from the courthouse is the brick one-room Clerk’s Office. The masonry is laid in a Flemish bond and the gabled-roof is covered with slate. A single door located in the center of the east elevation features a fanlight transom. A small half-exterior, central chimney is on the west elevation. The north elevation has two double-hung sash windows, while the south elevation has one double-hung sash window and a door. A brick arch with a fanlight transom surmounts this entry. The foundation was rebuilt in the 1960s and it is made out of concrete. The molded brick water table on the north, east and west sides is one of the more elaborate construction features of the building.

The interior is very simple and was altered in the 1960s when the building was used as a voting precinct for the county. The wall are covered with gypsum wall board and a simple flat stock baseboard. The pine floor was installed during the 1960s. The west side of the room includes a wood-burning stove flanked with bookshelves, each having paneled doors.