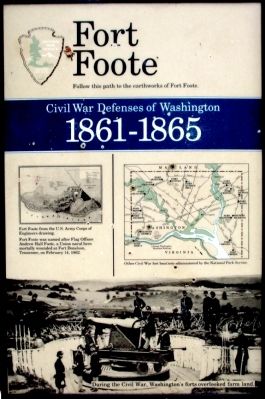 Follow this path to the earthworks of Forte Foote.

Location. 38° 46.05′ N, 77° 1.606′ W. Marker is in Fort Washington, Maryland, in Prince George's County. Marker can be reached from the intersection of Fort Foote Road and Jessica Drive, on the right when traveling south. Touch for map. Marker is at or near this postal address: 8901 Fort Foote Road, Fort Washington MD 20744, United States of America. Touch for directions.

Other nearby markers. At least 8 other markers are within 2 miles of this marker, measured as the crow flies. A different marker also named Fort Foote (about 400 feet away, measured in a direct line); King's Depression Carriage (about 500 feet away); Northwest Bastion (about 600 feet away); 15-inch Rodman Smoothbore (about 700 feet away); The Defenses of Washington (approx. 0.2 miles away); A Fine Improvable Marsh (approx. 1.1 miles away in Virginia); 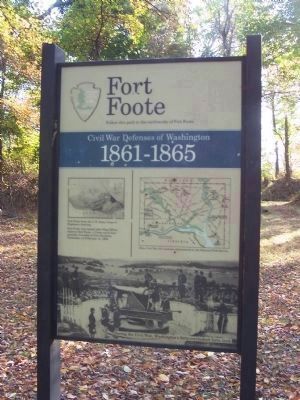 Related markers. Click here for a list of markers that are related to this marker. Fort Foote Virtual Tour By Markers. 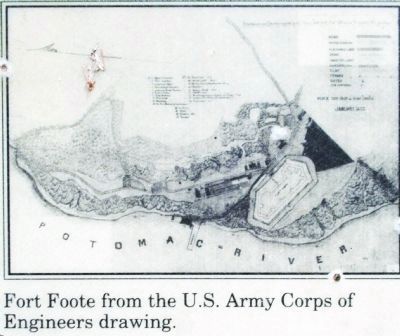 By Allen C. Browne, September 18, 2011
3. Drawing
Fort Foote from the U. S. Army Corps of Engineers drawing.
Close-up of illustration on marker 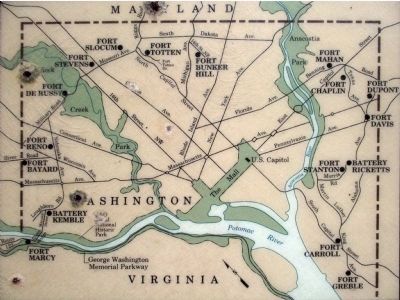 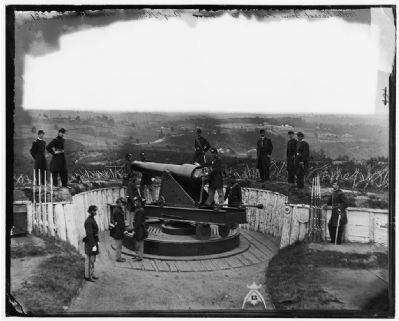 By William Morris Smith, circa August 1865
6. Parrott gun on iron barbette carriage at Fort Totten.
District of Columbia. Officers of Companies A and B, 3d Massachusetts Heavy Artillery, and crew of 100-pdr. Library of Congress [LC-B817- 7681] 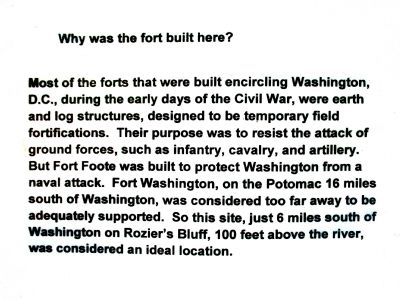 By Allen C. Browne, September 18, 2011
7. Why was the fort built here?
Most of the forts that were built encircling Washington, D.C., during the early days of the Civil War, were earth and log structures, designed to be temporary field fortifications. Their purpose was to resist the attack of ground forces, such as infantry, cavalry, and artillery. But Fort Foote was built to protect Washington from a naval attack. Fort Washington, on the Potomac 16 miles south of Washington, was considered too far away to be adequately supported. So this site, just 6 miles south of Washington on Rozier's Bluff, 100 feet above the river, was considered an ideal location.
Close-up of note on Bulletin Board at Fort Foote 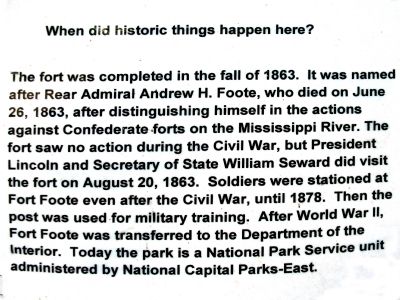 By Allen C. Browne, September 18, 2011
8. When did historic things happen here?
The fort was completed in the fall of 1863. It was named for Rear Admiral Andrew H. Foote, who died on June 26, 1863, after distinguishing himself in the actions against Confederate, forts on the Mississippi River. The fort saw no action during the Civil War, but President Lincoln and Secretary of State William Seward did visit the fort on August 20, 1863. Soldiers were stationed at Fort Foote even after the Civil War until 1878. Then the post was used for military training. After World War II, Fort Foote was transferred to the Department of the Interior. Today the park is a National Park service unit administered by National Capital Parks-East.
Close-up of note on Bulletin Board at Fort Foote 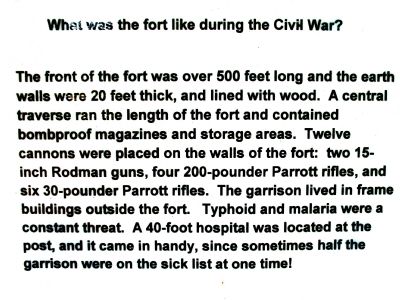 By Allen C. Browne, September 18, 2011
9. What was the fort like during the Civil War?
The front of the fort was over 500 feet long and the earth walls were 20 feet thick, and lined with wood. A central traverse ran the length of the fort and contained bombproof magazines and storage areas. Twelve cannons were placed on the walls of the fort: two 15-inch Rodman guns, four 200-pounder Parrott rifles, and six 30 pounder Parrott rifles. The garrison lived in frame buildings outside the fort. Typhoid and malaria were a constant threat. A 40-foot hospital was located at the post, and it came in handy, since sometimes half the garrison were on sick list at one time!
Close-up of note on Bulletin Board at Fort Foote 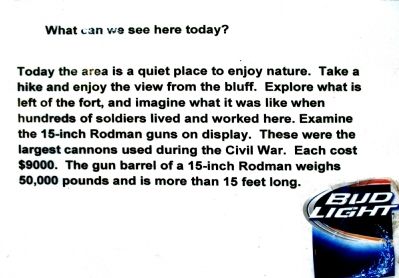 By Allen C. Browne, September 18, 2011
10. What can we see here today?
Today the area is a quiet place to enjoy nature. Take a hike and enjoy the view from the bluff. Explore what is left of the fort, and imagine what it was like when hundreds of soldiers lived and worked here. Examine the 15-inch Rodman guns on display. These were the largest cannons used during the Civil War. Each cost $9000. The gun barrel of a 15-inch Rodman weighs 50,000 pounds and is more than 15 feet long.
Close-up of note on Bulletin Board at Fort Foote
More. Search the internet for Fort Foote.