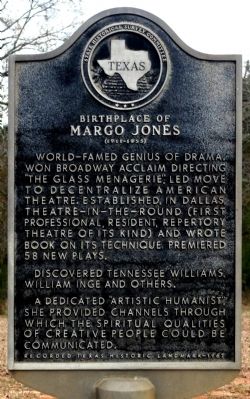 By Jim Evans, December 31, 2013
1. Birthplace of Margo Jones Marker
Inscription.
Birthplace of Margo Jones. World-famed genius of drama. Won Broadway acclaim directing “The Glass Menagerie”. Led move to decentralize American theatre. Established, in Dallas, theatre-in-the-round (first professional, resident, repertory theatre of its kind) and wrote book on its technique. Premiered 58 new plays., Discovered Tennessee Williams, William Inge and others. , A dedicated “artistic humanist”, she provided channels through which the spiritual qualities of creative people could be communicated. . This historical marker was erected in 1967 by State Historical Survey Comittee. It is in Livingston in Polk County Texas

A dedicated “artistic humanist”, she provided channels through which the spiritual qualities of creative people could be communicated.

Location. 30° 42.274′ N, 94° 55.961′ W. Marker is in Livingston, Texas, in Polk County. Marker is on South Washington Avenue (Business U.S. 59) south of West Matthews Street, on the right when traveling north. Touch for map. Marker is in this post office area: Livingston TX 77351, United States of America. Touch for directions.

Other nearby markers. At least 8 other markers are within walking distance of this marker. Polk County (approx. 0.4 miles away); 1905 Courthouse Annex 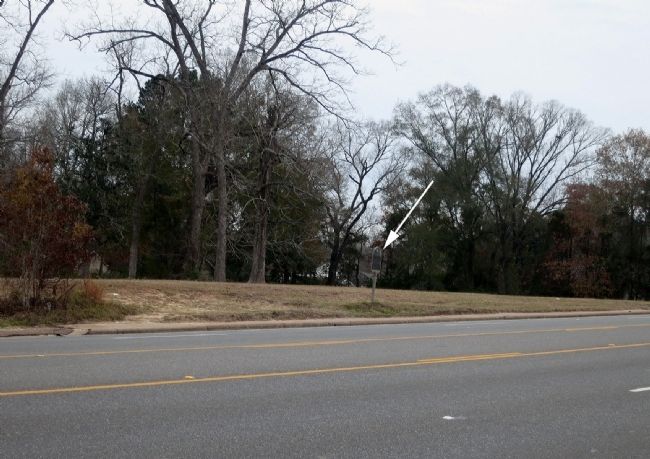 More about this marker. Today (January 1,2014) the marker is on a vacant lot.