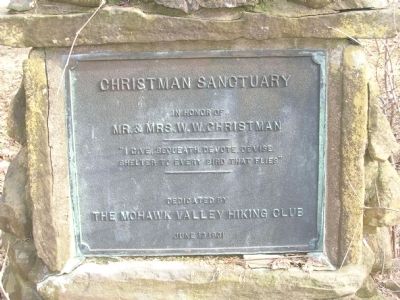 Location. 42° 44.593′ N, 74° 7.433′ W. Marker is in Duanesburg, New York, in Schenectady County. Marker is on Schoharie Turnpike (County Route 74), on the right when traveling east. The Christman Sanctuary marker is near the driveway to the only house on the west side of the railroad grade crossing. The parking area for the Christman Preserve is a tenth of a mile farther to the west along the road. Touch for map. Marker is in this post office area: Duanesburg NY 12056, United States of America. Touch for directions.

Other nearby markers. At least 8 other markers are within 3 miles of this marker, measured as the crow flies. A different marker also named Christman Sanctuary (approx. ¼ mile away); Home of William North 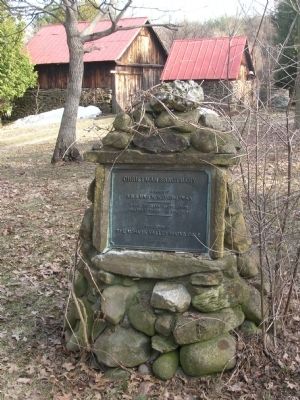 More about this marker. The marker is mounted on a cairn of stone cemented together.

Regarding Christman Sanctuary. The Eastern New York Chapter of the Nature Conservancy is the owner of the Christman Preserve. The Christman Preserve has had an enduring relationship with the Mohawk Valley Hiking Club, the group that commissioned the marker. This land has long been used by the Mohawk Valley Hiking Club, who sponsors a Thanksgiving Breakfast at the Preserve, an ongoing tradition that started in the 1930s.

The Christman Sanctuary is a 96 acre Nature Conservancy Preserve located along the Schoharie Turnpike in Schenectady County's Town of Duanesburg. It is open year-round to hikers and cross county skiers. The waterfalls and pools of the Bozen Kill top the attractions. The area being settled early on by the Dutch, "Kill" 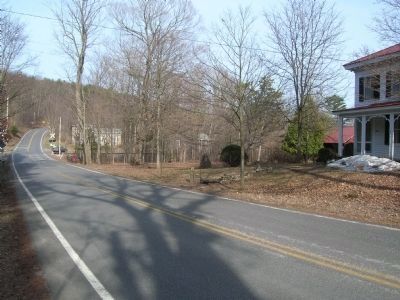 By Howard C. Ohlhous, April 8, 2008
3. Christman Marker Location
The Christman Sanctuary marker is on the lawn of this home along Schoharie Turnpike, seen in the center of the photo above.
is a Dutch word meaning creek or stream; Bozen Kill therefore was Dutch for "Noisy Stream".

The sanctuary, developed in 1888, was formerly part of the Christman Homestead, which is currently listed on the New York State and National Register of Historic Places. It was listed in the National Registar as the "Christman Bird and Wildlife Sanctuary" on August 25, 1970. A life long poet and farmer, W. W. Christman (b. May 30, 1865 at Delanson, N.Y. d. Feb 26, 1937) was awarded the Burroughs Medal by the John Burroughs Memorial Association in 1934 for the best nature book published that year; "Wild Pasture Pine". W.W. Christman is also the author of "Songs of the Helderhills", and "Songs of the Western Gateway". Christman was also a Freemason. This was also the home of Christman's son, Henry Christman, famous for his history of the Anti-Rent Wars, "Tin Horns and Calico". The land became the first Wildlife Sanctuary in the United States. 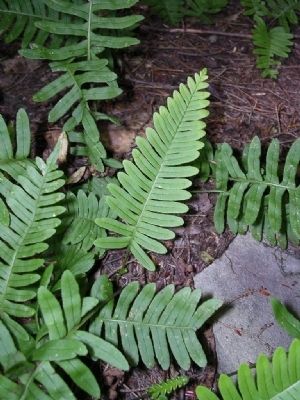 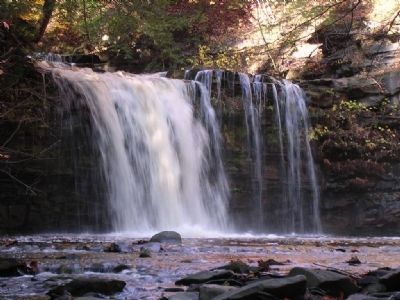 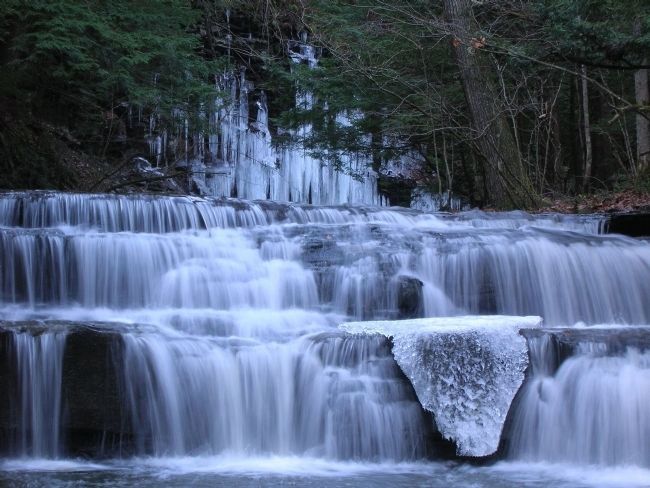