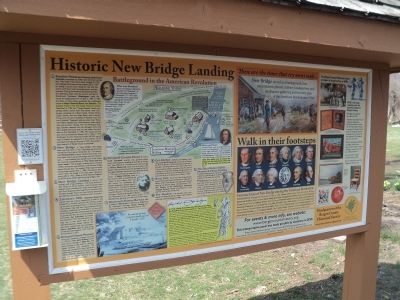 1) Steuben House.   Jan and Annetje (Ackerman) Zabriskie prospered as miller and merchant at this site. They built a five-room stone cottage in 1752 and enlarged the house to the present size in 1767 by adding a second story along the rear and the entire north block with its paneled parlor and bed chamber. During the American Revolutionary War, the Zabriskies sided with the Crown and fled to British-held Manhattan. Washington made the house his headquarters for 16 days in 1780. In 1783, the State of New Jersey presented the confiscated house to Major-General Baron von Steuben. The Steuben House is the only extant house he owned. Described in 1784 as a “Large Mansion House containing twelve rooms built with stone, with Outhouses consisting of a Bake House, Smoke House, Coach House, and two large Barns, and a Garden, Forty Acres of Land consisting of Meadow Land and two Orchards.” Steuben’s aide-de-camp, Capt. Benjamin Walker resided here, while Steuben made regular visits and summer retreats from his Manhattan lodgings. Steuben restored the war-damaged home and this is largely the house that you see today. 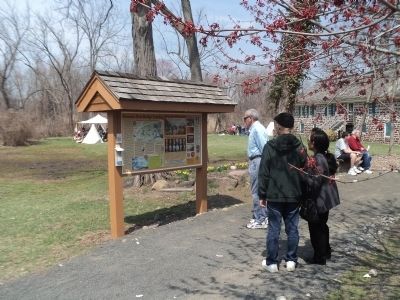 By Bill Coughlin, April 13, 2014
2. Historic New Bridge Landing Marker
He sold it back to the Zabriskies in 1788. The house and one acre were purchased by State of NJ in 1929. In 1939, the Bergen County Historical Society (BCHS) was invited to display its collections at the museum. BCHS purchased the adjacent 8 acres in 1944, thus preserving a fragment of Bergen Dutch countryside.

2) New Bridge.   A “New Bridge” with sliding draw was built here in 1745. Describing the American retreat from Fort Lee on November 20, 1776, eyewitness Thomas Paine wrote in The American Crisis, “Our first objective was to secure the bridge over the Hackensack . . . ” memorializing the darkest hour in the hopes for American independence as “the times that try men’s souls.” This strategic crossing was in constant conflict during the war because it was the first bridge above Newark Bay. The present Pratt-type low-truss swing bridge opened Feb. 2, 1889. One person alone could rotate the bridge to let ships pass. Closed to auto traffic in 1956. Listed on NJ & National Registers by BCHS as the oldest highway swing-bridge in NJ.

3) New Bridge Landing.   A narrow mill landing, built of log cribbing in 1744, could accommodate sloops of 40-ton burden. Local products were shipped south, including iron which was brought overland from Ringwood and Long Pond Ironworks. Merchandise brought back from city markets 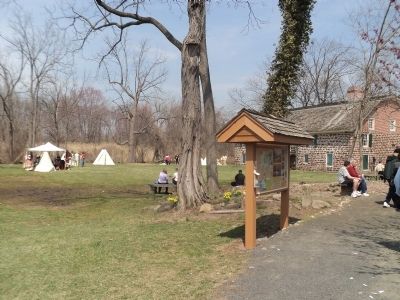 4) Zabriskie’s Mills.   Johannes Ackerman resided near the present intersection of Main & Elizabeth Ct. He built a gristmill, 40 x 20 feet, containing two pairs of grinding stones in 1714 at the outlet of Cole’s Brook. High tide was trapped in Cole’s Brook behind a dam, creating an artificial pond twice daily to run the waterwheel during ebb tide. Area farmers brought grain to be ground into flour for a more valuable commodity. Jan Zabriskie purchased the tide mill in 1745. The date stone lozenge set in the south end of the Zabriskie-Steuben House depicts the tide-driven waterwheel. Jan’s grandson, John J. Zabriskie, aged 25, died trying to free the waterwheel in 1793. The mill burned down in 1852.

5) Demarest House Museum.   Two-room sandstone cottage was built in 1794 for miller John Paulson at the time of his marriage to Altie Ely. The stove chimney in east room is a technological advance over fireplaces. The house was moved from the original site beside the French Burial Ground, New Milford, 1955-56. Demarest family artifacts are on display. Owned by the Blauvelt-Demarest Foundation. 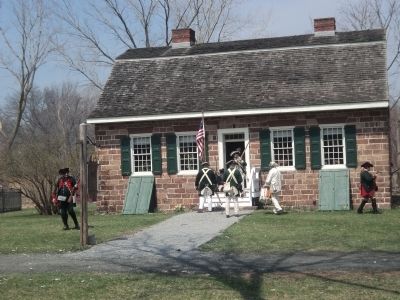 By Bill Coughlin, April 13, 2014
4. Campbell-Christie House
in 1774, at the time of his marriage to Altche Westeevelt. Jacob was a private in the Bergen Militia and the house was damaged in the Rev War. John Christie, blacksmith, purchased the house in 1795 and continued its operation as a tavern. J. Walter Christie, born in the house in 1865, is considered the “father of the modern tank” and best known for developing the Christie Suspension System used in World War II. Threatened with demolition, the house was moved here onto BCHS land in 1977 by the County of Bergen. Operated and funded by BCHS, and interpreted as an 18th cebtury tavern. Refreshments, gift shop and rest room (when open).

8) Out-Kitchen.   Authentic out-kitchen, replicating the John R. Demarest out-kitchen in Demarest. Built by BCHS in 1990, using antique materials, it includes a working beehive oven and smoke room. These separate kitchen structures kept the heat of cooking out of the main dwelling during summer and prevented oven fires from consuming the home. Located nearby is an Outhouse from Closter c. 1930

9) Brett Park.   Part of the New Bridge battleground during the American Revolution. Later 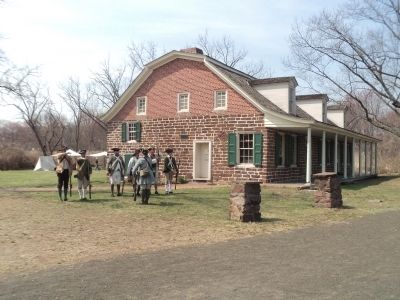 By Bill Coughlin, April 13, 2014
5. Steuben House
site of Rekow’s Farm and Bensen’s Campgrounds. Named after former Teaneck Mayor Clarence Brett in 1971. The Friends of the Hackensack Greenway through Teaneck maintain a southbound 3.5 mile pathway with access in Brett Park.

10) The Meadow.   The autoparts yard, completely remediated by 2010, is now an open meadow returning a pastoral setting to HNBL.

11) The Site of Future BCHS Museum & Library Building.   Elevated building planned to allow for exhibits and safe storage of the BCHS collections. We need your support!

Prehistory   The clay flat on the west bank of the river was known as Tantaqua’s Plain, inhabited by Tantaqua, a Hackensack sachem, and his kin (Steuben House location). Artifacts as old as 5,000 years have been found here at New Bridge and may be on exhibit.

( Sidebar : )
In 1710, Davis Ackerman described the area where the Steuben House now stands as “Tantewagh’s Plain.”
This is a variant of the name of Tantaqua, last great sachem of the Hackensack Indians. Cole’s Brook, which enters the river at the south end of the river landing, was known as Tantaqua’s Brook in 1682, being renamed for grist miller Tunis Cole in the early 19th century. The Hackensacks originally inhabited the lower part of the peninsula between the Hackensack River and Overpeck Creek until the 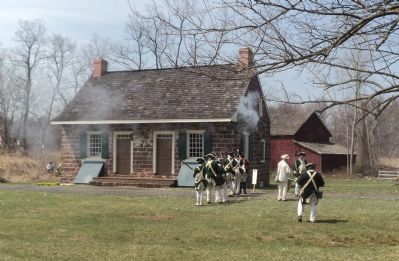 By Bill Coughlin, April 13, 2014
6. Demarest House
great sachem Oratam conveyed 2,260 acres south of Cedar Lane in 1669 to Sarah Kiersted for her service as interpreter. They then moved northward, establishing villages along Teaneck Path (Teaneck Road), westward to the outlet of French Creek at New Bridge. Uteneyik, meaning “villages” is possibly the origin of the name Teaneck. Tantaqua and his kinsfolk sold New Hackensack, extending from Cedar Lane north to French Creek at New Bridge, including “the Great Indian Field – called the Indian Castle.” Located on the sandy terrace overlooking French Creek and the Hackensack River, to Laurence Van Buskerk & Company in 1676. Cornelius Matthew, a Swedish land-clearer, was the first European settler in the vicinity of the Steuben House, arriving in 1683.

The sandy river plains and drumlin hills to the north of New Bridge were the territory of the Tappan Indians. David Demarest purchased the river plain in New Milford and Bergenfield, northward to the Oradell Flatts, in June 1677 from the Tappans, whose name is said to derive from the Alonquian, thuphonne, translated as “cold stream.” The Tappans and their relations, known as the Machkentjwoml, occupied the northern valley of the Hackensack River south to New Bridge.   -   historian Kevin Wright 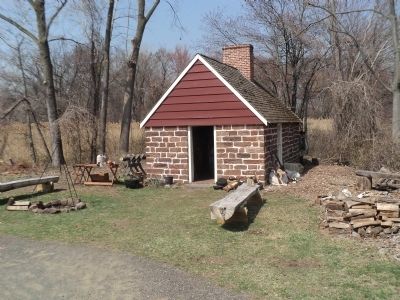 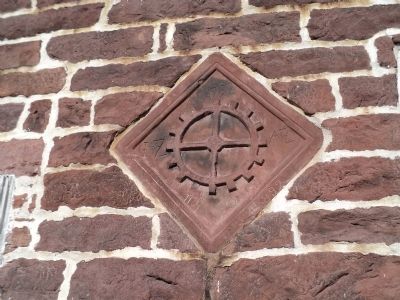 By Bill Coughlin, April 13, 2014
8. Date Stone on Steuben House
The 1752 date stone on the south end of the Zabriskie-Steuben House which depicts the tide-driven waterwheel is seen here. 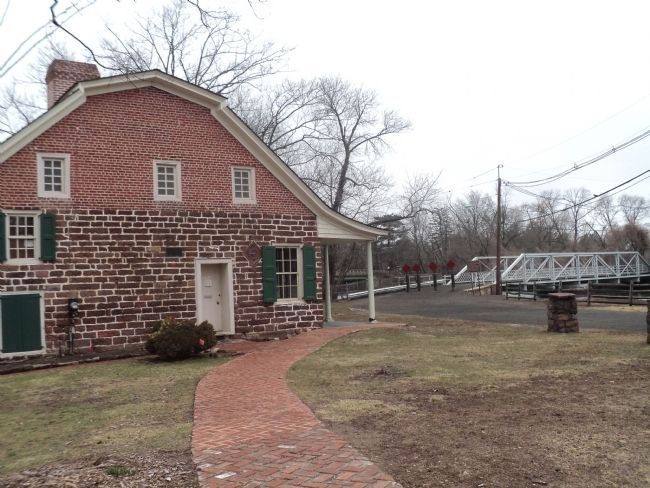 By Bill Coughlin, April 13, 2014
9. New Bridge
The bridge that Gen. Washington and the army used during the November 1776 retreat across New Jersey can be seen to the right of the Steuben House.
More. Search the internet for Historic New Bridge Landing.