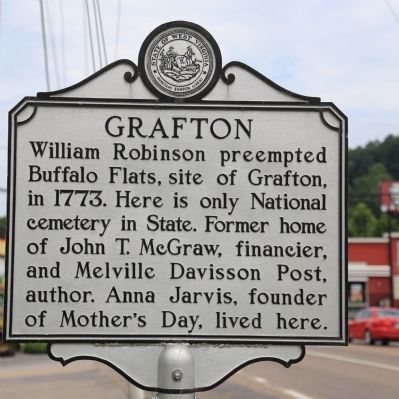 Topics and series. This historical marker is listed in these topic lists: Political Subdivisions • Settlements & Settlers. In addition, it is included in the West Virginia Archives and History series list. A significant historical year for this entry is 1773. 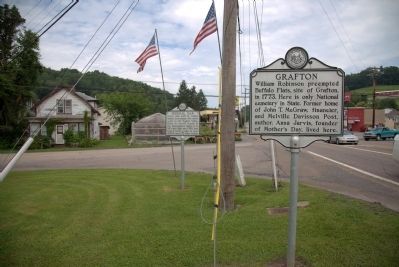 More about this marker. Before the Route 50 bypass was constructed, this marker was in downtown Grafton, on Main Street.

Also see . . .
1. John T. McGraw. Excerpt: “Businessman and Democratic Party activist John T. McGraw (January 12, 1856- April 29, 1920) was born at Grafton. His Irish immigrant father worked as a laborer to build the Baltimore & Ohio Railroad and was among the first residents of Grafton. Young McGraw was educated in the Catholic schools of Grafton, at St. Vincent Academy in Wheeling, and at Yale University, where he received a law degree in 1876. McGraw entered the practice of law and in 1880 was elected prosecuting attorney of Taylor County, beginning a long career as a leader in the Democratic Party.” (Submitted on July 3, 2014.)

2. Wikipedia entry for Melville Davisson Post. “Uncle Abner is Post’s best-known literary creation, the character having appeared in 22 stories that were serialized in American newspapers (primarily The Saturday Evening Post) between 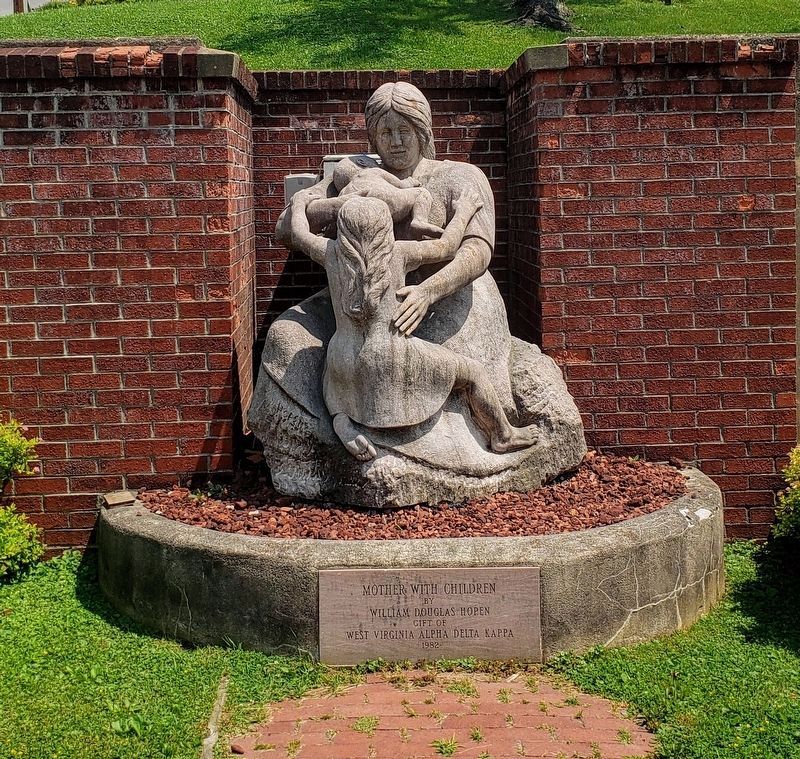 Photographed By Bradley Owen, June 21, 2021
3. Mother With Children Statue
Located on the grounds of the Mother's Day Shrine in Grafton, site of the first Mother's Day Service.
1911 and 1928. The first tale, ‘The Angel of the Lord,’ is perhaps the very first work in the historical mystery genre. Uncle Abner solved the mysteries that confronted him in a backwoods West Virginia community, immediately prior to the American Civil War and before the infant nation had any proper police system. He had two great attributes for his self-imposed task: a profound knowledge of and love for the Bible, and a keen observation of human actions. One example of Uncle Abner's keen deductive skills is his showing a deaf man had not written a document, because a word in it was phonetically mis-spelt.

“Ellery Queen would later call the stories ‘an out-of-this-world target for future detective-story writers.’ In his 1924 book of literary criticism Cargoes for Crusoes, Grant Overton called the publication of Post’s ‘The Doomdorf Mystery’ a ‘major literary event,’ and in Murder for Pleasure (1941), Howard Haycraft called Uncle Abner ‘the greatest American contribution’ to the list of fictional detectives after Edgar Allan Poe’s C. Auguste Dupin.” (Submitted on July 3, 2014.)

4. The Story of Anna Jarvis. “Anna Jarvis got the inspiration of celebrating Mothers Day quite early in life. It so happened that one day when Anna was 12 years old, Anna’s mother Mrs Jarvis said a class prayer in the presence of her daughter. To conclude the lesson on ‘Mothers of the Bible,’ Mrs Jarvis said a small prayer, ‘I hope that someone, sometime will found a memorial mothers’ day commemorating her for the matchless service she renders to humanity in every field of life. She is entitled to it.’ Anna never forgot this prayer. And at her Mothers graveside service, she recalled the prayer and said, ‘...by the grace of God, you shall have that Mothers Day.’ The words were overheard by her brother Claude. (Submitted on July 3, 2014.)
Credits. This page was last revised on June 24, 2021. It was originally submitted on July 3, 2014, by J. J. Prats of Powell, Ohio. This page has been viewed 400 times since then and 18 times this year. Photos:   1, 2. submitted on July 3, 2014, by J. J. Prats of Powell, Ohio.   3. submitted on June 23, 2021, by Bradley Owen of Morgantown, West Virginia.
Share this page.