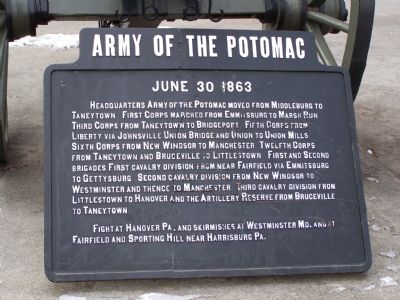 By Beverly Pfingsten, January 26, 2008
1. Army of the Potomac Marker
Inscription.
Army of the Potomac. June 30, 1863. Headquarters Army of the Potomac moved from Middleburg to Taneytown. First Corps marched from Emmittsburg to Marsh Run, third Corps from Taneytown to Bridgeport. Fifth Corps from Liberty via Johnsville Union Bridge and Union to Union Mills. Sixth Corps from New Windsor to Manchester. Twelfth Corps from Taneytown and Bruceville to Littletown. First and Second Brigades First Cavalry Division from near Fairfield via Emmitsburg to Gettysburg. Second Cavalry Division from New Windsor to Westminster and thence to Manchester. Third Cavalry Division from Littletown to Hanover and the Artillery Reserve from Bruceville to Taneytown. , Fight at Hanover Pa. and skirmishes at Westminster Md. and Fairfield and Sporting Hill near Harrisburg Pa. . This historical marker is in Hanover in York County Pennsylvania 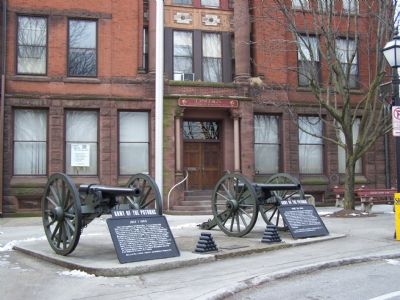 Click or scan to see
this page online
square. Touch for map. Marker is in this post office area: Hanover PA 17331, United States of America. Touch for directions.