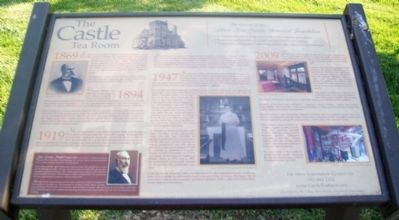 1869
In 1869, General John N. Roberts, a Civil War veteran, and his wife Emily, moved to Kansas and established their business and family in Lawrence. The Robertses [sic] had one daughter, Isabella, affectionately called "Belle." Roberts built his fortune designing and manufacturing containers, and distinguished himself as a leader in business, real estate, and politics. His honorific title as "General" stems from being an adjutant general of the Kansas National Guard.

Befitting their wealth and prominence in the community, the Robertses completed the construction of their new home, known as the "Castle," in 1894.

1894
General Roberts was particular in procuring the best artisans available to work on his new home, so he hired noted architect John Haskell to design the structure and Joel Gustafson to act as master stone mason. Local newspapers of the day described the house as "modern throughout," as well as a "model of architecture [and] one of the largest and most beautiful homes of the city."

Sidney Endacott, a young artist from England, came to Lawrence at the age of 20. General Roberts 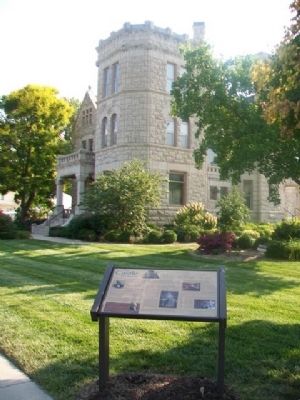 Click or scan to see
this page online
heard about his carving talent while the Castle was being built. It is said that the General was so impressed by Endacott's talent he gave him free reign, telling him to carve to suit himself. Sidney spent three months carving the five mantel pieces, staircases, newel posts, and china buffet for the home. After completing his Castle assignment, Sidney returned to England to become a noted watercolor artist.

1919
Mr. J.J. Simmonds, owner of the Lawrence Brick Yard, bought the Castle in 1919 and added the "castle-like" garage. Simmonds fell on hard times during the depression and lost the home in 1934. In 1943, the Assembly of God church purchased the home and made plans to disassemble it so they could use the stone to build a new church. Fortunately, the plans never came to fruition and in 1947 Libby Kriz purchased the Castle.

Libby Kriz, the daughter of Czechoslovakian emigrants, was born in Chicago, Illinois in 1916. She was very proud of her heritage and frequently referred to herself as a "Bohemian." She was an accomplished, independent and intelligent woman who earned her degree as a dietitian at the Illinois Institute of Technology. After graduating, she moved to Lawrence to become a dietitian at the University of Kansas. Known to many as "Miss Kriz," Libby was a wonderful mixture of Victorian sensibilities and 20th-century independence. 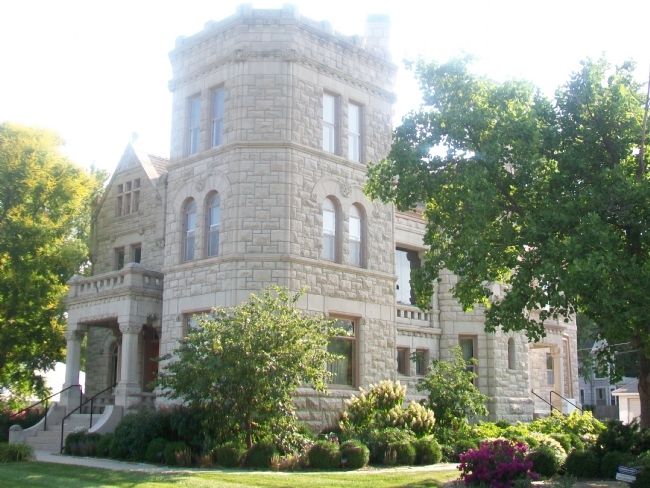 Photographed By William Fischer, Jr., August 2, 2014
3. The Castle Tea Room
July 1947, Libby and her friend Ruth Quinlan bought the home known as the Castle to open a tea room. Within weeks of the purchase, Ruth was diagnosed with a terminal illness, so Libby purchased Ruth's half interest in August 1947. After successfully launching the Castle Tea Room, she married her beloved "Doc," Dr. Louis Fiorito, who as a physician at the Leavenworth Veterans Administration Hospital.

While Libby loved the Castle, she remarked, "People are what it's all about." She enjoyed feeding people, loved parties and relished the wedding celebrations that occurred in the Castle Tea Room. This place where so many special events have been celebrated was always, first and foremost, a home. Libby lived in this home longer than any other resident - from 1947 to 2004. Dining room walls were adorned with Audubon prints and Norman Rockwell plates. She also displayed framed paintings and photographs by Sidney Endacott. She was eager to tell people the story of this young Englishman who carved the woodwork and went on to be knighted as an artist.

In addition to becoming friends with many members of the community, Libby was also very charitable to people in need and to serving the community. She was a modern pioneer of historic preservation, not only taking care of the Castle, but ensuring it would be available for generations to come. Thanks to Libby's foresight, the 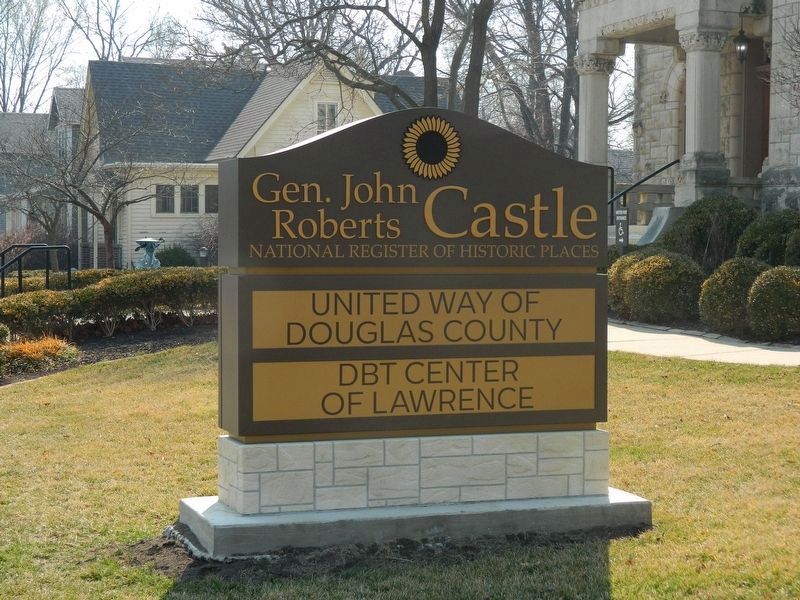 Photographed By Thomas Onions, March 6, 2021
4. Building Sign
The Tea Room is no longer in existence - the building has been taken over by two new occupants.
Castle was placed on the National Register of Historic Places in 1974, and in 1992, she established a not-for-profit foundation to preserve this community treasure.

In the last decade of her life, Libby was determined that this magnificent home would continue to be available for memorable events in people's lives. To ensure this legacy, she entrusted her estate for the renovation and future operation of the Castle to the Libuse Kriz-Fiorito Historical Foundation.

2009
Following Libby's death in 2004, the foundation undertook a historic rehabilitation project to make the Castle available to the community for the next century. The project began in 2005, and the Castle reopened to the public in May 2009.

The exterior building was cleaned and repaired, and a new perimeter foundation drain system installed. Renovating the original 1926 garage added modern restrooms and a service kitchen for the courtyard.

Electrical systems were completely replaced, including new underground service lines, new panels and distribution circuits. These modifications occurred without noticeable impact on the interior appearance and greatly improved the overall safety of the electrical system.

The renovation of the Castle received several awards, including the Kansas Preservation Alliance Medallion Award for 2009.

John Gideon Haskell (1832-1907) is well known in Kansas for having designed many of the state's finest buildings. He was one of the few professional architects working in Kansas during the territorial period.

Born in Massachusetts, John Haskell came to Kansas in July 1857 when he was 25 years old. He followed his family, who had arrived in Lawrence in 1854-1855 with the New England Emigrant Aid Company. John's father passed away in January 1857 and he left school at Brown University in Rhode Island to attend to family affairs. He remained in Lawrence and practiced architecture until his death in 1907.

Although not the original designer of the Kansas statehouse, Haskell was appointed to the position of architect and superintendent by the Board of State House Commissioners in March, 1867. He took over construction that had begun in October, 1866. During his tenure as architect of the state house, Haskell designed and completed the east wing and set the foundation and basement for the central portion of the building.


For More Information Contact Us
785-843-1151
www.CastleTeaRoom.com
Operated by the Libuse Kriz-Fiorito Historical Foundation

Topics. This historical marker is listed in these topic lists: Architecture • Settlements & Settlers. A significant historical month for this entry is January 1857.