The Battles of Newtonia Commemoration 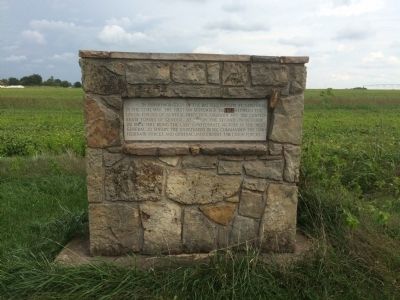 Photographed By Michael Manning, October 9, 2014
1. The Battles of Newtonia Commemoration Marker
Inscription.
The Battles of Newtonia Commemoration. . , In commemoration of the battles fought at Newtonia in the Civil War. The first on September 30, 1862 between the Union forces under Colonel Fredrick Salomon and Confederate forces under General Jo Shelby. The second on October 28, 1864. This being the last Confederate victory in the West. General Jo Shelby, the undefeated Rebel commanded the Confederate forces and General James Blunt, the Union forces. . This historical marker is in Newtonia in Newton County Missouri

Topics. This memorial is listed in this topic list: War, US Civil. A significant historical month for this entry is September 1854.

Location. 36° 52.517′ N, 94° 11.099′ W. Marker is in Newtonia, Missouri, in Newton County. Memorial is on Missouri Route 86 south of Spring Street (County Route EE), on the left when traveling south. Touch for map. Marker is in this post office area: Newtonia MO 64853, United States of America. Touch for directions.