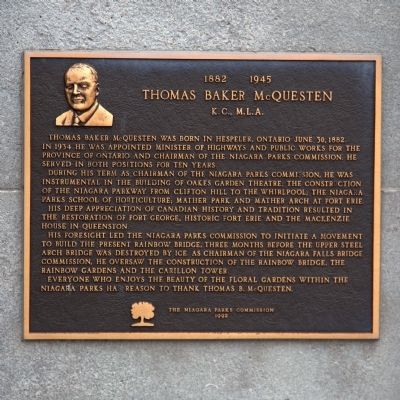 Thomas Baker McQuesten was born in Hespeler, Ontario June 30, 1882. In 1934 he was appointed Minister of Highways and Public Works for the Province of Ontario and Chairman of the Niagara Parks Commission. He served in both positions for ten years.

His deep appreciation of Canadian history and tradition resulted in the restoration of Fort George, historic Fort Erie and the MacKenzie House in Queenston.

Everyone who enjoys the beauty of the floral gardens within the Niagara parks has reason to thank Thomas B. McQuesten. 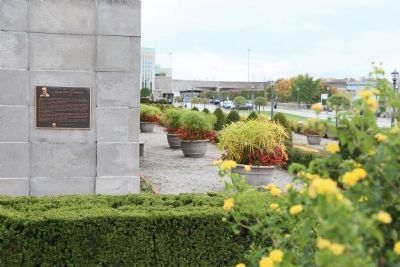 Photographed By J. J. Prats, October 15, 2014
2. Thomas Baker McQuesten Marker at Rainbow Gardens
Niagara Parkway is on the right, where the horizon is the Canadian side of Rainbow Bridge.


Erected 1992 by The Niagara Parks Commission.

Topics. This historical marker is listed in these topic lists: Entertainment • Environment • Forts and Castles • Roads & Vehicles. A significant historical date for this entry is June 30, 1600.

Also see . . .
1. Wikipedia entry for Thomas McQuesten. “Thomas Baker McQuesten was a Canadian politician, lawyer and politician and government appointee who lived in Hamilton, Ontario. As minister of Highways in the government of Mitchell Hepburn, McQuesten oversaw a number 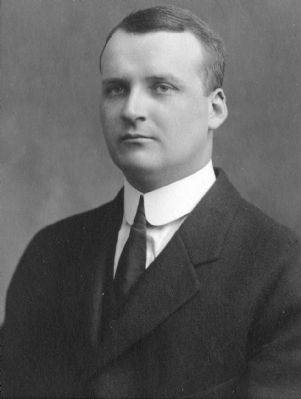 2. Rainbow Garden is a Thing of Beauty. This page has photographs and a short article on Rainbow Garden. Excerpt: “The purpose of the Rainbow Gardens was to connect the Oaks Garden Theatre complex and the Rainbow Bridge. The Oakes Garden Theatre is a grass covered Greco-Roman style amphitheater surrounded by a limestone staircase, and features lovely fountains, urns and ornamental statuary. The Garden area is beautifully surrounded by a large ornamental stone wall which helps create a feeling of seclusion and serenity, despite it’s proximity to the many high-rise hotels and the Falls themselves. One can walk through this tranquil setting and forget the hustle and bustle of the always crowded Clifton Hill just 100 yards north.” (Submitted on November 2, 2014.) 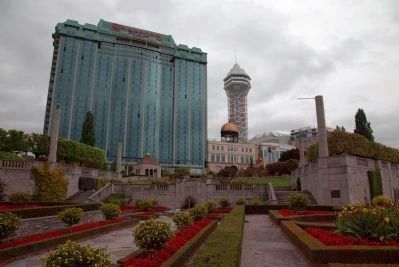 Photographed By J. J. Prats, October 15, 2014
4. Entrance to Oakes Garden Theatre
This marker is on the wall to the right of the staircases which lead to the grass-floored amphitheater. 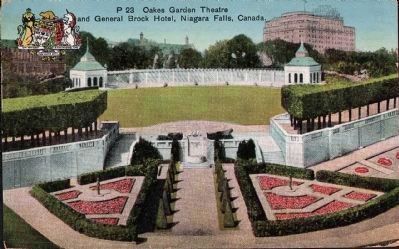 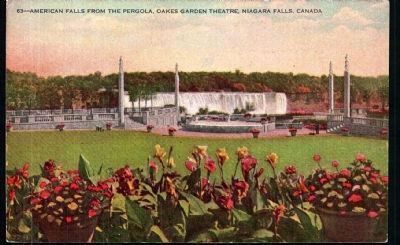 6. “American Falls from the Pergola, Oakes Garden Theatre, Niagara Falls, Canada”
This postcard view is the reverse from image No. 5. 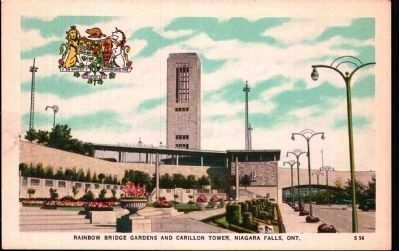 7. “Rainbow Bridge Gardens and Carillon Tower, Niagara Falls, Ont.”
Compare this view with Photo No. 2. The marker post-dates this postcard. It would be placed at the end of the upper wall on the left. 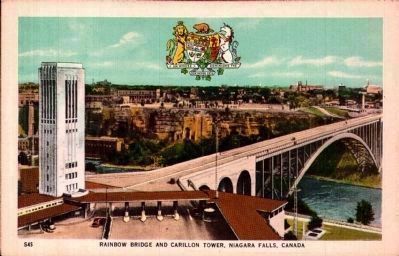 8. “Rainbow Bridge and Carillon Tower, Niagara Falls, Canada”
On this linen postcard, the view is from Canada towards the United States. The falls are out of frame to the right. 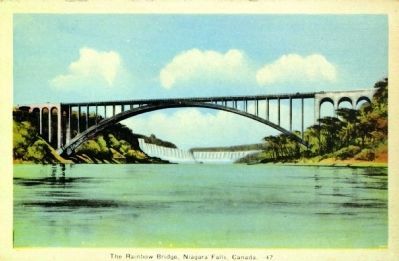