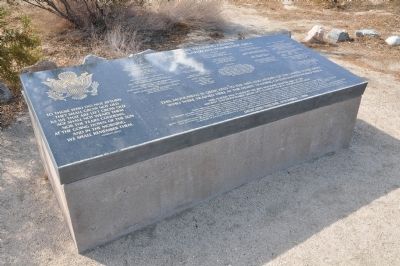 This monument is dedicated to the men and women of the United States Army who were trained here at the Desert Training Center during World War II.

Topics and series. This historical marker is listed in this topic list: War, World II. In addition, it is included in the Desert Training Center, and the E Clampus Vitus series lists.

Location. 33° 39.683′ N, 115° 43.388′ W. Marker is in Chiriaco Summit, California, in Riverside County. Marker is on Chiriaco Road, on the right when traveling west. Marker is located approximately 200 feet southwest of the Museum entrance within the fenced in area of the exhibits. Touch for map. Marker is at or near this postal address: 62510 Chiriaco Road, Indio CA 92201, United States of America. Touch for directions.

Regarding Desert Training Center. This Plaque, honoring the many units that trained at the Desert Training Center, California-Arizona Maneuver Area, received donations from over 20 Chapters of E Clampus Vitus and many individuals. All appreciate the sacrifices to keep America a free county. SOURCE: Billy Holcomb Chapter 1069 35th Anniversary Plaque Book by Phillip Holdaway