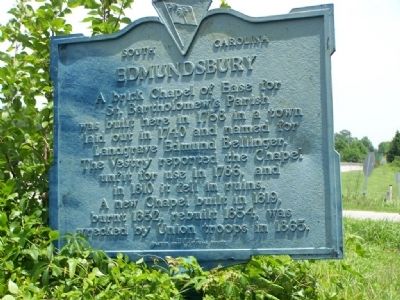 By Mike Stroud, May 2008
1. Edmundsbury Marker
Inscription.
Edmundsbury. . . A brick Chapel of Ease for St. Bartholomew's Parish was built here in 1785 in a town laid out in 1740 and named for Landgrave Edmund Bellinger. The vestry reported the chapel unfit for use in 1786, and in 1810 it fell in ruins. A new chapel was built in 1819, burnt 1852, rebuilt 1854, and was wrecked by Union troops in 1865. . This historical marker was erected in 1961 by Colleton County Historical Society. It is in Ashepoo in Colleton County South Carolina

Topics and series. This historical marker is listed in these topic lists: Churches & Religion • Colonial Era • Settlements & Settlers • War, US Civil. In addition, it is included in the South Carolina, Colleton County Historical Society series list.

Location. 32° 44.549′ N, 80° 33.509′ W. Marker is in Ashepoo, South Carolina, in Colleton County. Marker is at the intersection of Ace Basin Parkway (U.S. 17) and Clover Hill Road, on the right when traveling north on Ace Basin Parkway. About 100 yards south of Ashepoo River bridge on US 17. Touch for map. Marker is in this post office area: Green Pond SC 29446, United States of America. Touch for directions.

Other nearby markers. At least 10 other markers are 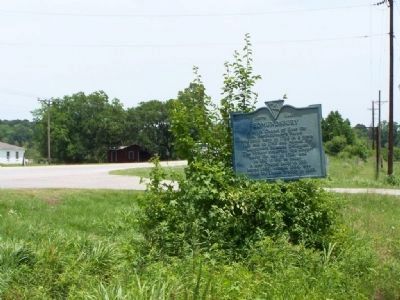 2. A History of Edmundsbury, South Carolina. Found on quite a few maps of South Carolina as early as 1764 and as late as 1780, a small village named Edmundsbury can be found north and west of the well-known early town of Willton, situated in what is today Colleton County. (Submitted on January 3, 2011, by Brian Scott of Anderson, South Carolina.) 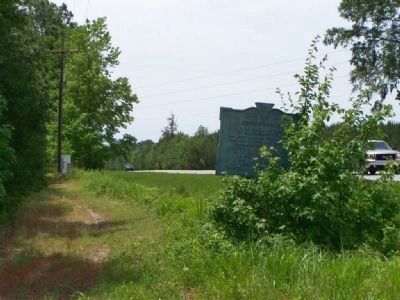 By Mike Stroud, 2008
3. Edmundsbury Marker as northbound traffic passes on US 17
(senior) were intended to be a fresh new system of titles of specifically American lesser nobility, created for hereditary representatives in a proposed upper house of a bicameral Carolina assembly. (Submitted on January 3, 2011, by Brian Scott of Anderson, South Carolina.)

5. Chapel of Ease. A chapel of ease (sometimes 'chapel-of-ease') is a church building other than the parish church, built within the bounds of a parish for the attendance of those who cannot reach the parish church conveniently. (Submitted on January 3, 2011, by Brian Scott of Anderson, South Carolina.) 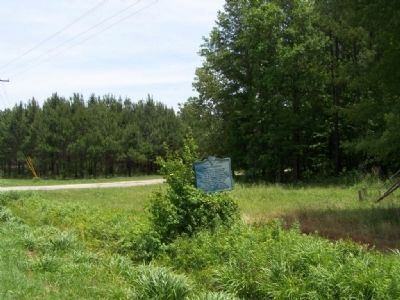