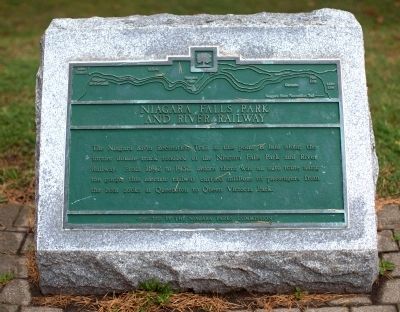 The Niagara River Recreation Trail at this point is laid along the former double-track roadbed of the Niagara Falls Park and River Railway. From 1892 to 1932, before there was an auto route along the gorge, this electric railway carried millions of passengers from the boat docks at Queenston to Queen Victoria Park.

Erected by the Niagara Parks Commission.

Topics. This historical marker is listed in this topic list: Railroads & Streetcars. A significant historical year for this entry is 1892. 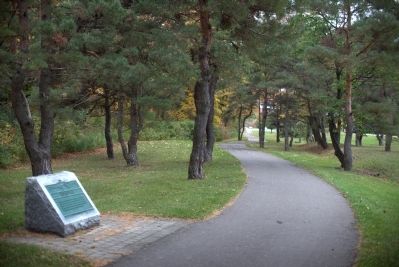 Also see . . .  Great Gorge Route and the Niagara Falls Park and River Railway. Rick Berketa’s excellent compilation, with photographs, on the electric railways on both sides of the Great Gorge. Linked by two bridges, they formed a loop and for a number of years one ticket on one electric car would take you on a tour of both the Canadian and the U.S. side of the gorge, including a side trip to Horseshoe Falls. Excerpt: “The loop began at the Canadian end of the Upper Steel Arch Bridge. The rail line followed a route on the top edge of the gorge in a southerly direction past the grandeur of the American Falls to the Table Rock at the Horseshoe Falls. Here the tracks made a 180° turn and returned through Queen Victoria Niagara Falls Park in a northerly direction past the Clifton Hotel and the Upper Steel Arch Bridge. The railway followed the top edge of the Niagara Gorge to its northern extent where the rail line crossed into Lewiston, New York via the Queenston-Lewiston Suspension Bridge. From Lewiston, the railway ran southerly in direction following a rail bed at the base of the gorge only feet above the torrent of the Niagara River. As the trolley crossed under the Whirlpool Bridge, the rail bed began a slow gradual rise to the top of the gorge and the Upper Steel Arch Bridge. The Great Gorge Route provided patrons with the most magnificent view of the Niagara River and the Whirlpool Rapids.” (Submitted on December 8, 2014.)
Credits. This page was last revised on December 16, 2020. It was originally submitted on December 8, 2014, by J. J. Prats of Powell, Ohio. This page has been viewed 352 times since then and 28 times this year. Last updated on December 9, 2014, by Anton Schwarzmueller of Wilson, New York. Photos:   1, 2. submitted on December 8, 2014, by J. J. Prats of Powell, Ohio. • Bill Pfingsten was the editor who published this page.
Share this page.