In Memory of Fifteen Young Men 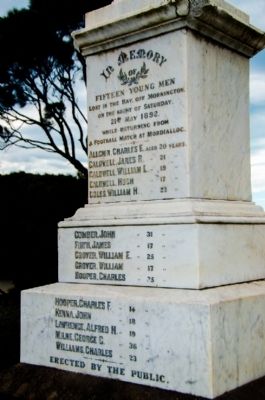 In memory of fifteen young men lost in the bay off Mornington on the night of Saturday 21st May, 1892, while returning from a football match at Mordialloc.

Erected 1892 by the public of the town of Mornington.

Other nearby markers. At least 1 other marker is within 19 kilometers of this marker, measured as the crow flies 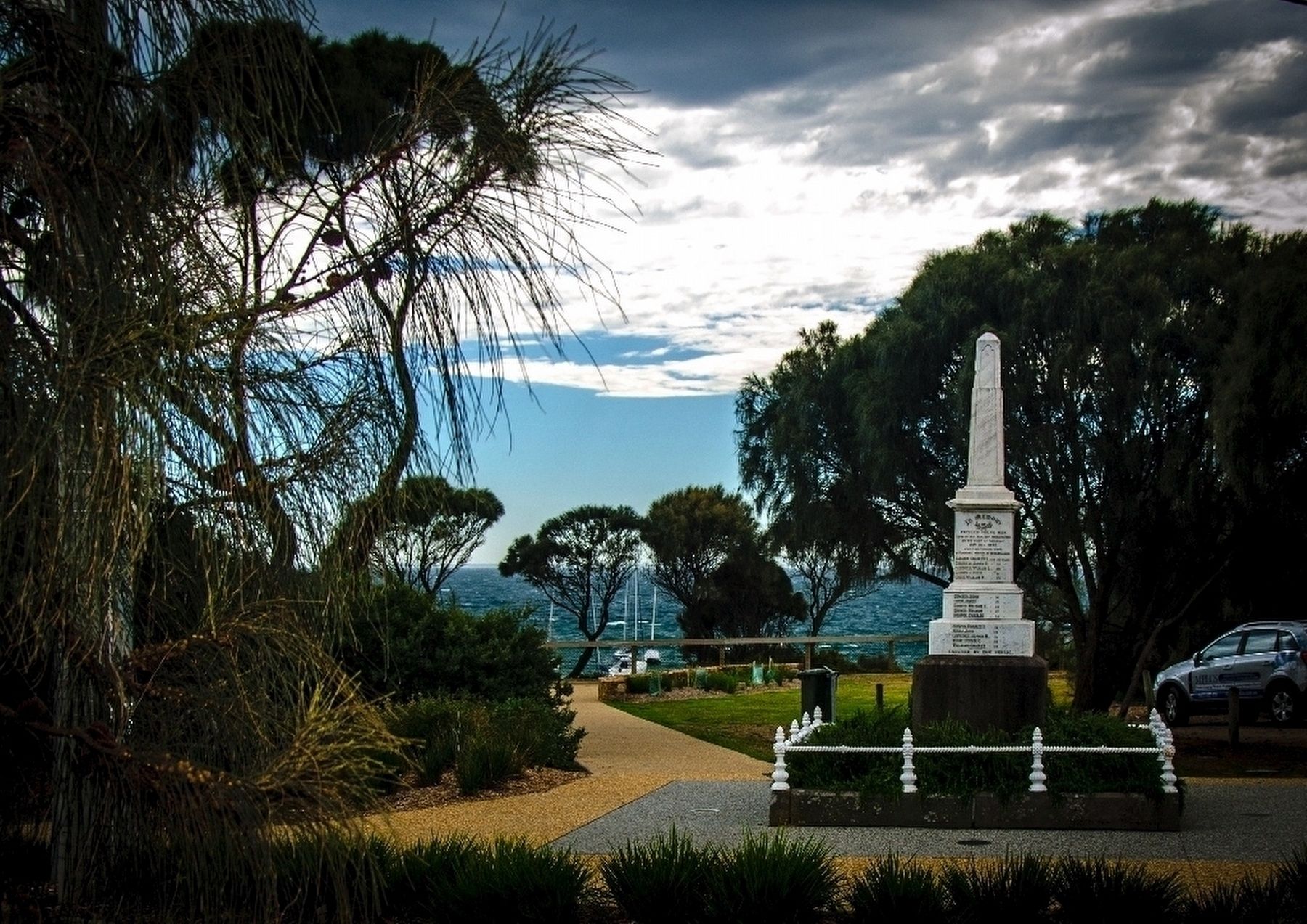 Regarding In Memory of Fifteen Young Men. [Text on an explanatory plaque erected nearby in recent years.]
This Memorial commemorates the fifteen members of the Mornington Football Club who drowned on the night of Saturday 21st May 1892. After playing Mordialloc in a drawn match, these men chose to return home on the sailing boat Process, owned and skippered by Charles Hooper, an experienced sailor. The others returned to Mornington on the train.

The alarm was raised when the boat had not arrived as expected by 9.30pm.

Joseph Grover set off by buggy for Mordialloc, returning at 3.00am to confirm the team had left around 6.00pm as planned.

Senior Constable Thomas Murphy had been notified and woke the Post Mistress to telegraph Mordialloc, with no response. He then organized boats and search parties. Meanwhile, anxious relatives patrolled the beaches and pier.

The partially submerged Process was found the next morning on Pelican Reef, Mt Eliza, with the body of Alfred Lawrence trapped underneath. Three other bodies were found in the following weeks on the beaches of Mt Eliza and Rosebud. What happened is unknown, but it was thought a sudden squall hit the boat, a wire stay parted causing the sail to run down, and the boat capsized. There were no survivors.

The tragedy affected many of the families in the small community. Ten children were left fatherless. Rev. Caldwell lost three sons. Joseph Grover, builder, lost a son and a brother. Charles Hooper the boatman and his son were both drowned.

A committee was formed to raise money by public subscription for the families who had lost breadwinners, and for the memorial.

Also see . . .  Fifteen Young Men: Australia’s Untold Football Tragedy. 2016 book by Paul Kennedy on Amazon.com, with the Look Inside before you buy feature. “It had become well known that three of Reverend James Caldwell’s sons — Jim, Willie and Hugh — were lost with the rest of the team. But the old Irishman with the long, white beard had not missed a sermon, or any important social event, in almost twenty years. ¶ Reverend Caldwell, one of the most revered citizens of Mornington since his arrival in 1874, turned every head in Main Street as he walked in his dark three-piece suit and overcoat from the foreshore up the slight rise of the thoroughfare, past the hotels, boarding houses, police station, white-picketed Mechanics’ Institute, butcher, baker, smithy’s, general stores, towards the St. Andrew’s Presbyterian chapel.” (Submitted on May 19, 2018.)

Editor’s want-list for this marker. Photo of the nearby explanatory plaque • Can you help?
Share This Page.