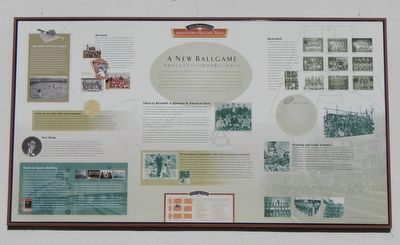 Americanization was difficult for the Issei. Prejudice, language barriers and discrimination often stymied their efforts, yet they persisted, often venturing into Western society with great zeal. With the Nisei generation, however, the Japanese community took a huge leap forward in Americanization. Citizens by birth and pushed by their parents to assimilate into mainstream American society, the Nisei eagerly embraced the new experiences and freedoms of American life and passed their values and passions on to succeeding generations.

Yakyu to Baseball: A Japanese & American Story (center)
In 1872 an American schoolteacher introduced baseball to Japan. The game, dubbed yakyu (fieldball), with its novel team structure and applications of math and physics, soon spread to schools in Tokyo, Kumamoto, Yokohama and Kobe. Japanese missionary Takie Okumura took the game to Hawaii's plantations and organized the first Japanese American baseball squad in 1899. 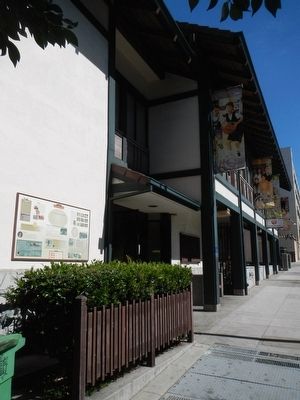 Click or scan to see
this page online
sprang up throughout the West. "BBC" - Baseball Crazy day was a special indulgence for the Issei. Escaping from their daily regimen of toil and propriety, they abandoned themselves to the emotion of the game - cheering and heckling, singing and clapping as the suffered or soared with the fate of their team.

For the Issei, baseball, the all-American sport, was a foothold in American society and a source of pride, entertainment and camaraderie. They passed their enthusiasm for the game to the Nisei through teams formed at churches and social clubs. In the 1920s the semi-pro teams of the Northern California Japanese Baseball League drew large crowds whenever they played. Although racial discrimination would be the rule in the Major Leagues until 1947, Nisei teams played white and Negro League teams in inter-league play and exhibition games. Nisei women also formed their own highly popular Women's Night Ball Association.

The San Francisco Connection: Lefty O'Doul and Japanese Baseball
In 1934 while on this third goodwill tour to Japan, Frank 'Lefty' O'Doul helped inaugurate, Japanese professional baseball and suggested naming the fledgling Tokyo team the Yomiuri Giants. The next year, the Yomiuri Giants, starting a North American tour, bested the San Francisco Seals with Joe DiMaggio in the outfield and new manager, 'Lefty' O'Doul, in the dugout. In 1949, O'Doul and the Seals were tapped by Lt. Tsuneo 'Cappy' Harada, a former Nisei baseball player who served on General Mac Arthur's staff, for a goodwill tour to improve Japan-US relations and to lift the spirits of the Japanese people. The ten-game series drew over half a million spectators and raised over $100,000 for Japanese charities. With Harada's help O'Doul returned to Japan throughout the early 1950s, often with Joe DiMaggio, to work with teams, develop the sport and most of all, to be with the Japanese people. In 2002, O'Doul was inducted into Japan's Baseball Hall of Fame.

Baseball (upper left)
The era of Nisei Baseball, from the 1920s through the 1950s when every community boasted a team may be over, but American's favorite pastime is still in the hearts of many Nikkei. In the 1970s Japanese companies such as Otagiri, JFC, Toraya and many others sponsored softball team that played games almost every weekend during the season. Over the years, the Golden Gate Optimists have generously sponsored teams of boys and girls of Japanese heritage as well as children of all backgrounds. The fundamentals that many little leaguers gained from playing I-league ball assured them a place on mainstream varsity teams that once eluded their grandfathers.

Baseball and the Camps
Japanese Americans interned during World War II turned to baseball as a means to restore some semblance of normalcy to their lives, Baseball diamonds were not in the government plans for the camps and some, ironically, were built outside of the barbed wire fences. Baseball also became a potent symbol for Japanese Americans in the camps denied their homes and rights, they still played American's national game with passion, pride and skill and took that spirit with them as they relocated inland, served overseas in the U.S. Army and eventually as they returned to the homes they had been forced to leave.

A Rose by Any Other Name Nisei nicknames (center left )
Many Nisei found that their Japanese names were virtually unpronounceable to Westerners. To make life easier and just for the fun of it, nicknames became a common and lasting feature of Nisei culture. Some nicknames were shortened forms of the Japanese name; 'tak' for Takasugi or 'Chiz' for Chizuko, or a phonetic westernization such as 'Sax' for Tsuyako or 'Itchy' for Junichi, or an Americanized substitute like 'Mike' for Masao or 'Nikki' for Noriko. Nisei ballplayers bore colorful and descriptive nicknames including Takeo 'Babe' Utsumi whose coach chose the auspicious moniker. Kazoo 'Pug' Mimura noted for getting into fights and Tsuneo 'Cappy' Hanada, an all-around athlete who capitalized his high school baseball, basketball and football teams.

Yori Wada
The first Asian American University of California Regent, Yori Wada was respected as a civic teacher, not only in the Nikkei community, but in the larger community of San Francisco. Yori Wada did much to promote relations between and African American communities. He counseled and mentored generations of African American your, among others, through his work at Booker T. Washington Community Center and the Buchanan Street YMCA. In 1992, Yori Wada was awarded the UCSF Medal, the highest honor the campus bestows, for his service to the University and for his as a long time champion for civil rights.

Room to Spare: Bowling (bottom left)
In the late 1940s, many Japanese Americans in the Bay Area began bowling. Despite their enthusiasm for the game, Nikkei bowlers were not allowed to form leagues sanctioned by the American Bowling Congress (ABC) or the Women's International Bowling Congress (WIBC).
At the Downtown Bowl, Henry Golobic and his son, Rex welcomed the Nikkei bowlers and allowed them to form a non-sanctioned league, coordinated by Kayo Hayakawa, Nob Wada and James 'Smokey' Today. Around 1949, Henry Golobic secured official sanction from the ABC for the Nikkei men's league. About a year, a women's league was formed by Jeanette Hayakawa, Susie Today, Shina Wada and 'Muts' (Wada) Furuya.

Bowling's popularity grew and more men's leagues were formed with the help of Joe Yamamoto and Kayo Hayakawa. San Francisco had four ABC and WIBC sanctioned "Nikkei Leagues": Men's Majors, Women's Majors and two men's handicap, which formed the San Francisco Nisei Bowling Association. A national organization, the Japanese American National Bowling Association (JANBA) founded in 1974, grew out of the 1947 National JACL Nisei Bowling Tournament held in Salt Lake City. JANBA tournaments held all over the county, include teams from as far away as Japan.
Although not as visible or widespread as other sports, the role of bowling in community life was highlighted by spirited protests against the closure of Japantown Bowl, demolished in 2000 to make way for condominiums. Nikkei bowling leagues remain active in the Bay Area, offering recreation and camaraderie and supporting the community by sponsoring scholarships for young people.

Basketball (top right)
Starting with teams in the 1920s, Japanese American basketball has become more than just a game of hoops. With leagues all over California, it is a community builder unlike any other organization. Like Japanese American baseball that formed because of discrimination, Nikkei basket ball leagues offered smaller statured athletes an opportunity to play with their peers. No longer sole Japanese American, the leagues are more inclusive, including other Asian Americans and even non-Asian players. Sponsored by churches, scout troops and community centers, Nikkei basketball brings families together for games and tournaments to cheer on the spirit of community.

Shinzen
Shinbone in Japanese means international goodwill, which is the intension of The Nikkei Youth Goodwill Program, an annual cross-cultural exchange program between Japanese and Japanese American communities. In 1995 the Japanese Cultural and Community Center of Northern California (JCCCNC) and the Office of the Consulate General of Japan in San Francisco agreed on the need for a youth exchange program to promote friendly competition while building an understanding of culture. In alternate years the teens and their families visit each other's country to experience each other's culture, communities and interests. Through friendly competition and the exchange of ideas, Shinzen encourages international understanding and goodwill.

Scouting and Youth Activities (bottom right)
Scouting has a long history in the Japanese American community. Its idealism and focus on community service and character building appealed to young people seeking to find way to become part of the American society. Boy Scout Troop 12, affiliated with the Japanese Christian Churches, was the first in Japantown. It was founded in 1915 at the instigation of 14 year old Masanobu Morisuye who recruited the principal of Nippon Gakuen, Yoshizo Sano to be its first scoutmaster. In 1932 Troop 29 was formed by the Buddhist Church of San Francisco and Rev. Yoshiaki Fukuda of Konka Church founded Troop 68 (the pre-war predecessor of Troop 58) in 1939.
In postwar Japantown, Scout troops were an important social outlets for youth, especially through athletics programs. Scouting, including both Boy Scouts and Girl Scout Troops, continues to provide recreational outlets, leadership training and community involvement for Japantown's young people.

Topics. This historical marker is listed in these topic lists: Asian Americans • Sports. A significant historical year for this entry is 1872.

Other nearby markers. At least 8 other markers are within walking distance of this marker. Issei Women's Legacy (within shouting distance of this marker); Uoki Sakai (about 500 feet away, measured in a direct line); Soto Mission of San Francisco (about 800 feet away); House of Gerhard F. Terschuren (approx. 0.2 miles away); Mary Ellen Pleasant Memorial Park (approx. ¼ mile away); Sir Arthur Conan Doyle (approx. 0.3 miles away); Sarcophagus of Thomas Starr King (approx. half a mile away); 1545 Divisadero (approx. half a mile away). Touch for a list and map of all markers in San Francisco.
Credits. This page was last revised on June 16, 2016. It was originally submitted on July 30, 2015, by Barry Swackhamer of Brentwood, California. This page has been viewed 389 times since then and 12 times this year. Photos:   1, 2. submitted on July 30, 2015, by Barry Swackhamer of Brentwood, California. • Andrew Ruppenstein was the editor who published this page.
Share This Page.