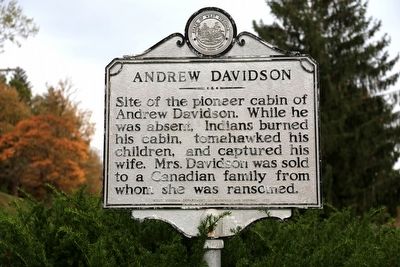 By J. J. Prats, October 16, 2015
1. Andrew Davidson Marker
Inscription.
Andrew Davidson. . Site of the pioneer cabin of Andrew Davidson. While he was absent, Indians burned his cabin, tomahawked his children, and captured his wife. Mrs. Davidson was sold to a Canadian family from whom she was ransomed. . This historical marker was erected in 1973 by West Virginia Department of Archives and History. It is in Bluefield in Mercer County West Virginia

Site of the pioneer cabin of Andrew Davidson. While he was absent, Indians burned his cabin, tomahawked his children, and captured his wife. Mrs. Davidson was sold to a Canadian family from whom she was ransomed.

Erected 1973 by West Virginia Department of Archives and History.

Topics and series. This historical marker is listed in these topic lists: Native Americans • Settlements & Settlers. In addition, it is included in the West Virginia Archives and History series list. 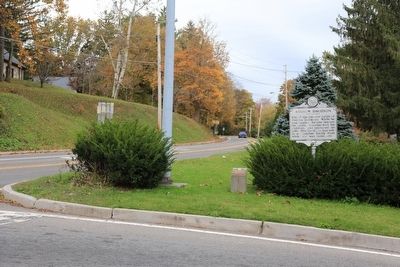 Also see . . .  Andrew Davidson's Family Killed. Chapter from Emory L. Hamilton's Indian Atrocities Along the Clinch. Excerpt: “In the spring of 1791, Andrew Davidson was living at the head spring of East River, about a half mile below the eastern limits of the city of Bluefield, West Virginia. In addition to himself, his family consisted of his wife Rebecca, his three small children, two girls and a boy, and a "bound" boy and girl named Broomfield. The bound children were very young, between seven and ten years old, and were more in the nature of proteges than servants. Mrs. Davidson was a granddaughter of James Burk from whom Burk's Garden received its name. Mr. Davidson had gone on a business trip to Smithfield, formerly Draper's Meadows and now Blacksburg, Virginia. It was the sugar making season, and a few days after her husbands departure for Smithfield, Mrs. Davidson was busily occupied gathering sugar water from sugar trees close to the house. While she was thus engaged, several Indians, who could speak English, came upon the scene. They told her that she and her children must go with them to their towns in Ohio. She was in a delicate condition, and unfit to undertake the long and fatiguing trip she was required to make.