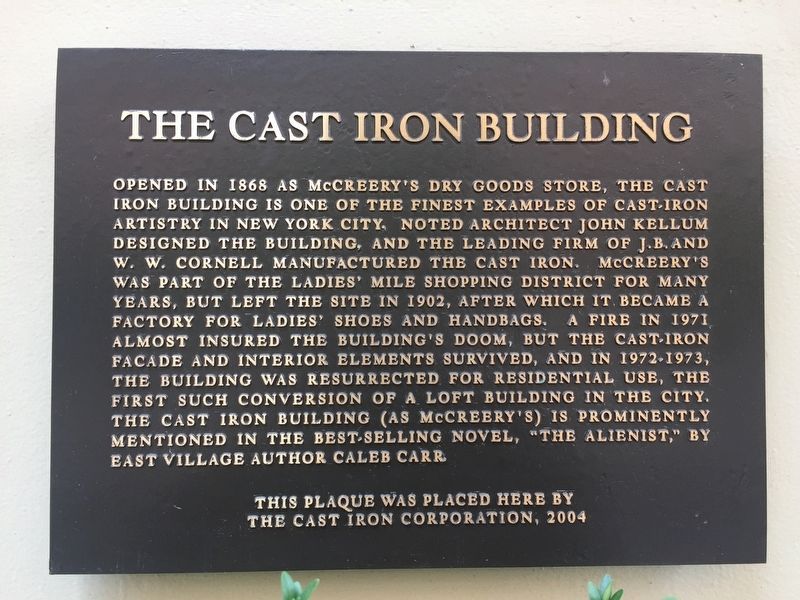 Opened in 1868 as McCreery's Dry Goods Store, the Cast Iron Building is one of the finest examples of cast-iron artistry in New York City. Noted architect John Kellum designed the building and the leading firm of J.B. and W.W. Cornell manufactured the cast iron. McCreery's was part of the Ladies' Mile Shopping District for many years, but left the site in 1902, after which it became a factory for ladies' shoes and handbags. A fire in 1971 almost insured the building's doom, but the cast-iron facade and interior elements survived, and in 1972-1973 the building was resurrected for residential use., the first such conversion of a loft building in the city. The Cast Iron Building (as McCreery's) is prominently mentioned in the best-selling novel, "The Alienist," by East Village author Caleb Carr.


This plaque was placed here by
The Cast Iron Corporation, 2004.

Erected 2004 by The Cast Iron Corporation. 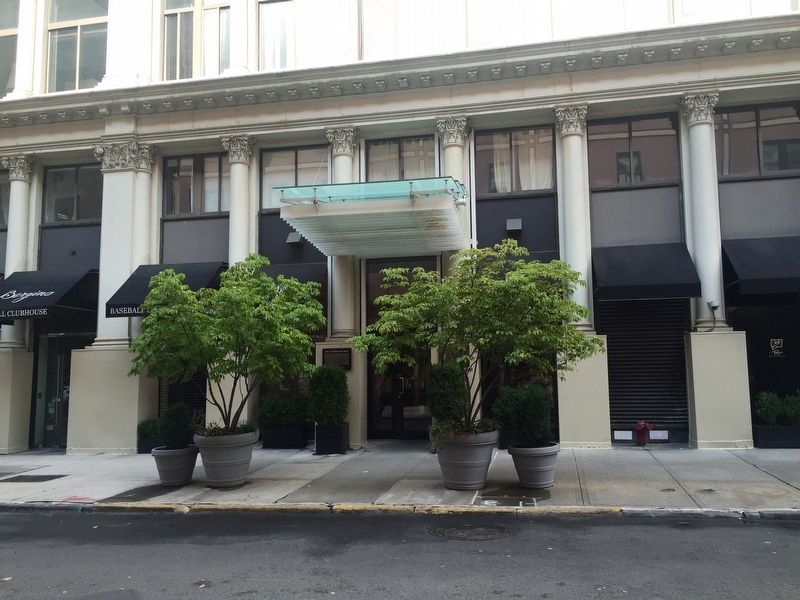 Also see . . .  The 1868 McCreery & Co Dry Goods Store - 801 Broadway (Daytonian in Manhattan Blog, 3/15/2011). In 1868, three years after the end of the Civil War, the new James McCreery & Co. Dry Goods opened its magnificent emporium on Broadway at 11th Street. Designed by John Kellum, the five-story French Second Empire building was the latest in architectural fashion, the style originating in Paris only about a decade earlier. Kellum used the relatively new technology of a pre-fabricated cast iron façade which, while being fire-proof, allowed for the ample use of large windows. Vast glass show windows lined the street level while a striking mansard roof with lacy cresting and French dormers capped the building.... Constructed by builders J. B. and W. W. Cornell, the lavish store cost 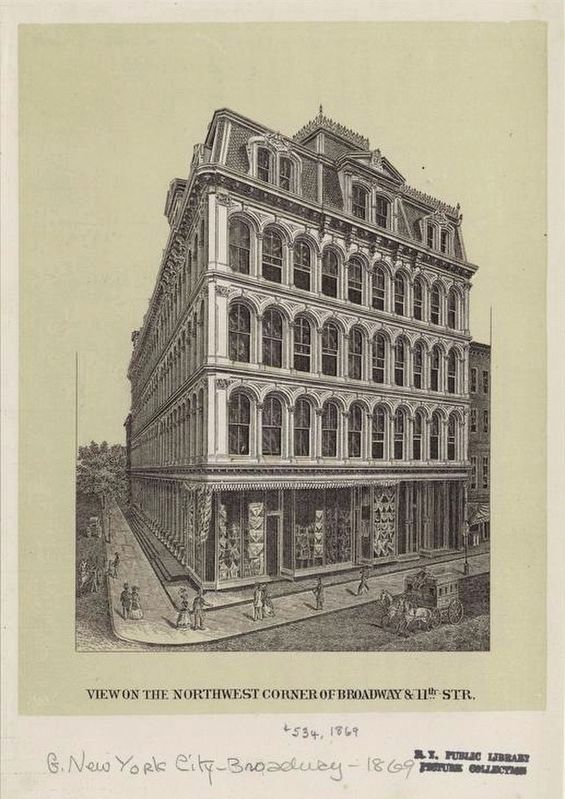 Manual of the Corporation of the city of New York. (New York : The Council, 1840-1870), 1869
3. View on the Northwest Corner of Broadway & 11th Str.
Additional title: 801 Broadway, James McCreery & Co Dry Goods Store. Image courtesy of the New York City Public Library Digital Collections.
a staggering $300,000.... McCreery had chosen a highly-fashionable area for his new building. Across Broadway was the Episcopal Grace Church where, for twenty years, New York’s wealthy had worshipped and were married. Across 11th Street to the south was the first-class St. Denis Hotel, opened in 1853, and the side streets were lined with grand brownstone residences....Focusing on the female shopper, the store catered to the monied carriage trade. Before long The New York Times would deem it "one of the most highly esteemed dry goods establishments in America." In 1872 the newspaper commented on the store's goods. “Shawls, silks and furs, of good quality, and specially suited to the season, may be obtained at McCreery & Co.’s establishment, Broadway and Eleventh-street. They have recently added largely to their stocks, and now offer a fine selection of goods intended for ladies’ use.”... (Submitted on October 18, 2016.) 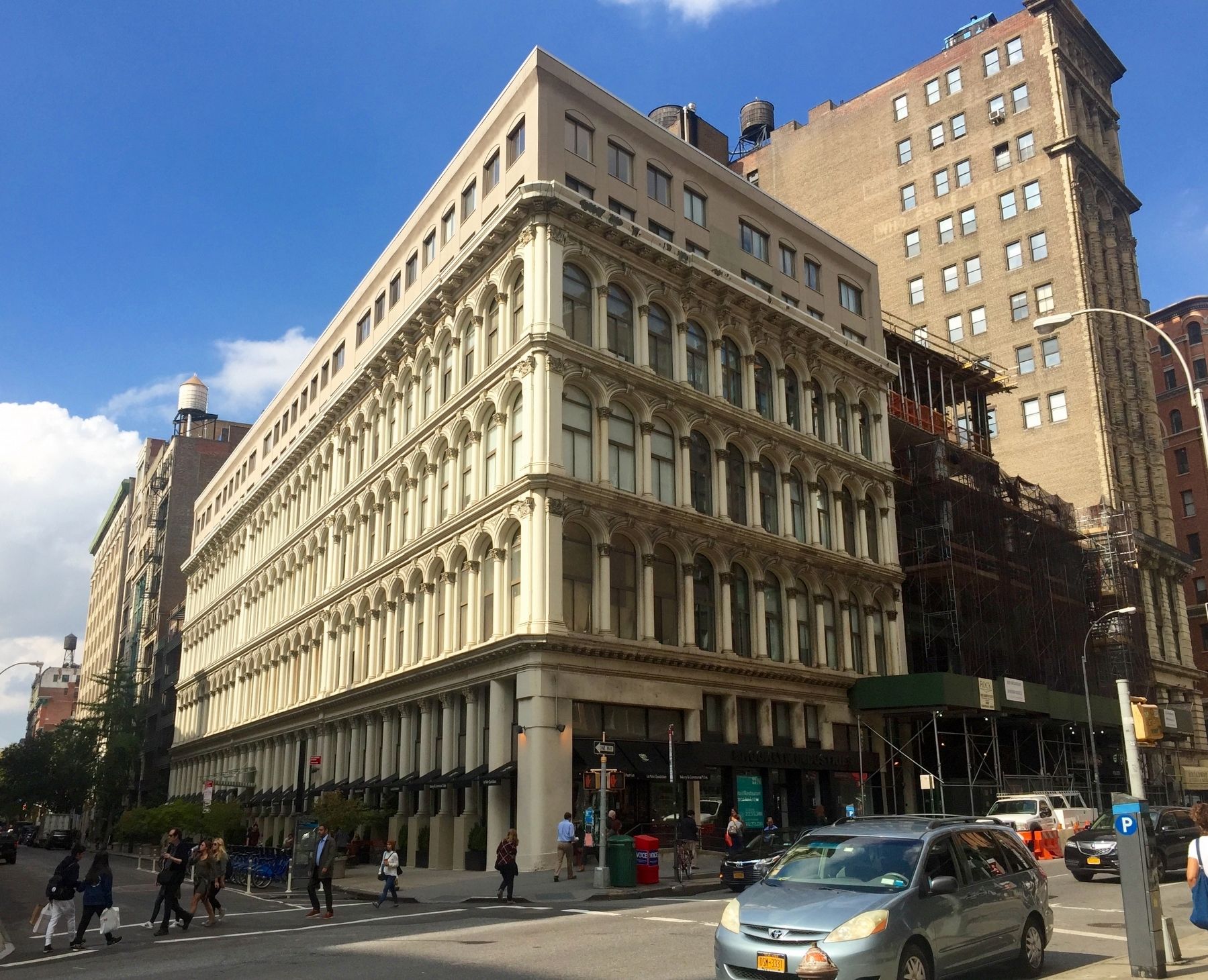