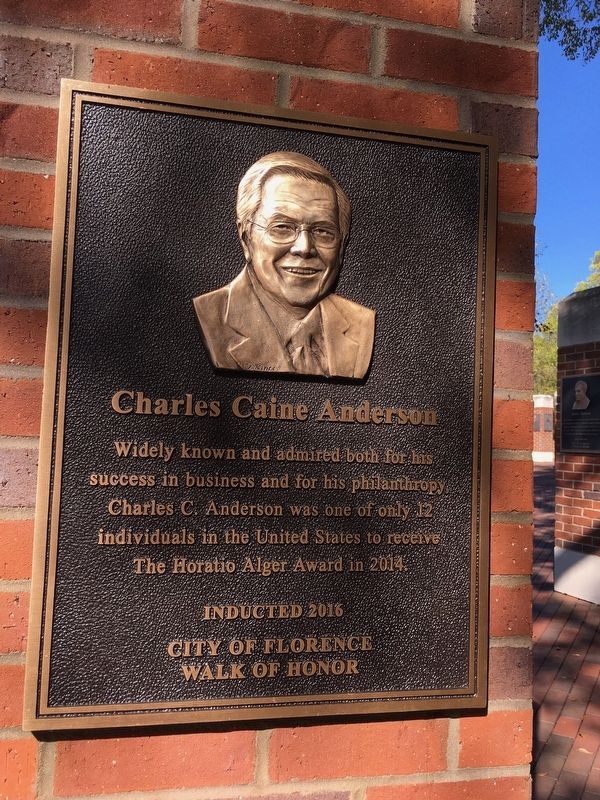 By Sandra Hughes, November 4, 2016
1. Charles Caine Anderson Marker
Inscription.
Charles Caine Anderson. City of Florence Walk of Honor. Widely known and admired both for his success in business and for his philanthropy. Charles C. Anderson was one of only 12 individuals in the United States to receive the Horatio Alger Award in 2014. . This historical marker was erected in 2014 by City of Florence. It is in Florence in Lauderdale County Alabama

Widely known and admired both for his success in business and for his philanthropy. Charles C. Anderson was one of only 12 individuals in the United States to receive the Horatio Alger Award in 2014.

Topics. This historical marker is listed in these topic lists: Charity & Public Work • Industry & Commerce. A significant historical year for this entry is 2014.

Location. 34° 48.358′ N, 87° 37.89′ W. Marker is in Florence, Alabama, in Lauderdale County. Marker is on Hightower Place. Behind Marriott Shoals in Heritage Park Walk of Honor. Touch for map. Marker is at or near this postal address: 10 Hightower Place, Florence AL 35630, United States of America. Touch for directions.

Also see . . .
1. Fireworks Today. Charles Anderson’s own rags-to-riches story began in Florence, Alabama, where his father started a makeshift newsstand in 1917. At 9, Anderson was helping out with the family business by delivering papers. After attending the University of North Alabama, Anderson returned to Florence to work at the newsstand full-time, adding books, magazines and even fireworks to the small original storefront and opening more locations. The success of the fireworks business in his stores inspired Anderson to launch a side business importing fireworks from China; today, that company is TNT Fireworks, of the four companies Anderson shaped from those tiny North Alabama newsstand. Today, Anderson’s four sons run the four businesses—TNT Fireworks, Books-A-Million, Anderson Press and Anderson Media—and he serves as chairman emeritus of the Anderson Companies. The president and CEO of the Alger Award Association, Tony Novelly, calls Anderson’s success “incomparable” and an example of the American Dream. “Mr. Anderson’s accomplishments, work ethic and vision for his family’s business deeply reflect the principles of Horatio Alger,” says Novelly. (Submitted on November 5, 2016, by Sandra Hughes Tidwell of Killen, Alabama, USA.)