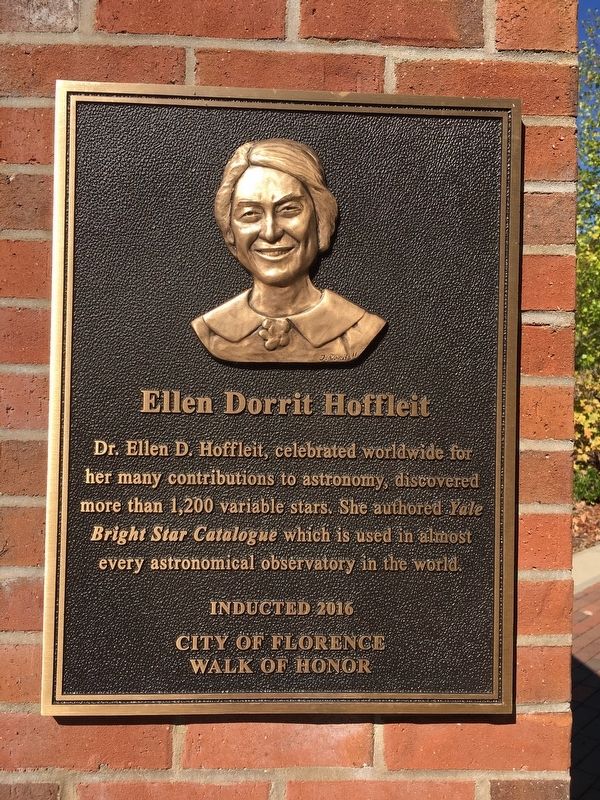 By Sandra Hughes, November 4, 2016
1. Ellen Dorrit Hoffleit Marker
Inscription.
Ellen Dorrit Hoffleit. City of Florence Walk of Honor. . Dr. Ellen D. Hoffleit, celebrated worldwide for her many contributions to astronomy, discovered more than 1,200 variable stars. She authored Yale Bright Star Catalogue which is used in almost every astronomical observatory in the world. . .
Inducted 2016. . This historical marker was erected in 2016 by City of Florence. It is in Florence in Lauderdale County Alabama

Dr. Ellen D. Hoffleit, celebrated worldwide for her many contributions to astronomy, discovered more than 1,200 variable stars. She authored Yale Bright Star Catalogue which is used in almost every astronomical observatory in the world.

Location. 34° 48.404′ N, 87° 37.88′ W. Marker is in Florence, Alabama, in Lauderdale County. Marker can be reached from Hightower Place 0.3 miles south of Veterans Drive (Alabama Route 133). Located in River Heritage Park. Touch for map. Marker is at or near this postal address: 10 Hightower Place, Florence AL 35630, United States of America. Touch for directions.

Also see . . .
1. Encycolpedia of Alabama. Astronomer, educator, and science historian Dorrit Hoffleit (1907-2007) was widely respected by the amateur and professional astronomical community as a mentor and an ardent supporter of independent research. Her more than 600 catalogues, books, articles, book reviews, and news columns cover myriad aspects of astronomy, from variable stars (stars that change brightness over time) and stellar properties to meteor showers, quasars, and rocketry. She also made important contributions to the history of astronomy, especially on the role and work of women in the field. (Submitted on November 5, 2016, by Sandra Hughes of Killen, Alabama, USA.)

2. American Astronomical Society. Hoffleit's early years were difficult, and she described her own life as having led "From Early Sadness to Happy Old Age" (Comments on Astrophysics, 18, p. 107, 1996), with a late autobiography entitled Misfortunes as Blessing in Disguise(American Association of Variable Star Astronomers, 2002). The name Dorrit came from Dickens, but her parents, who called her Dorchen in childhood, were German immigrants, and some of her classmates refused to play with her "because she's German!" Home oscillated between a failing farm in Florence, Alabama, where she was born on 12 March 1907 and rented space in the railroad town of New Castle, Pennsylvania, where her father was a bookkeeper for the Pennsylvania Railroad. (Submitted on November 5, 2016, by Sandra Hughes of Killen, Alabama, USA.)