[English translation, courtesy of Wikipedia:]
Homosexual men and women were persecuted and murdered in Nazi Germany.

The crimes were denied, the dead concealed, the survivors scorned and prosecuted.

We remember this, in the awareness that men who love men and women who love women still face persecution. 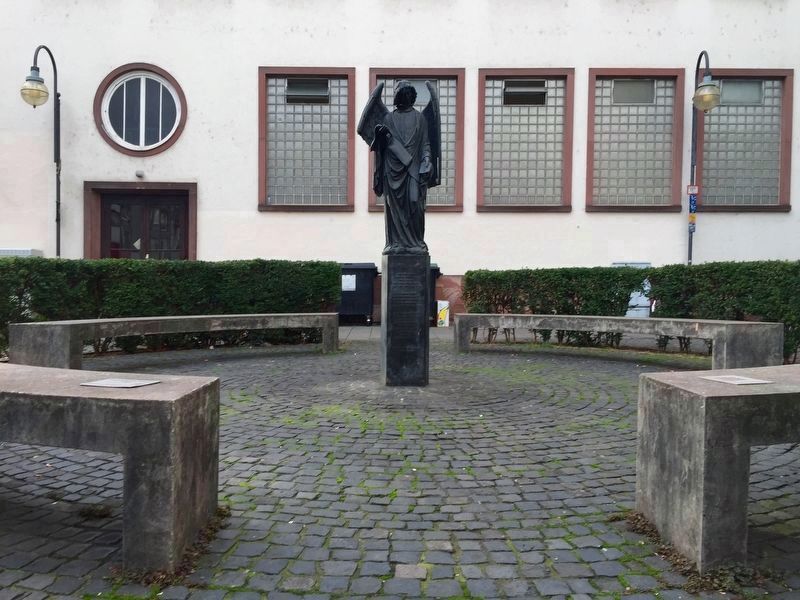 By Andrew Ruppenstein, November 22, 2016
2. Frankfurter Engel / Angel of Frankfurt and Marker - Wide View
The "Memorial for Homosexuals" in Frankfurt am Main was handed over to the public in 1994 as the first memorial of its kind in Germany. Created by Rosemarie Trockel, it was realized through the support of the city of Frankfurt am Main, the Hessische Kulturstiftung, and the Hannchen-Mehrzweck-Stiftung, as well the many donations from citizens throughout Germany. - Frankfurter-engel.de (in translation)

Click or scan to see
this page online
. Touch for map. Marker is in this post office area: Frankfurt am Main, Hessen 60313, Germany. Touch for directions.

Also see . . .
1. Persecution of homosexuals in Nazi Germany and the Holocaust (Wikipedia). Upon the rise of Adolf Hitler and the National Socialist German Workers Party (the Nazi Party) in Germany, gay men and, to a lesser extent, lesbians, were two of the numerous groups targeted by the Nazis and were ultimately among Holocaust victims. Beginning in 1933, gay organizations were banned, scholarly books about homosexuality, and sexuality in general, (such as those from the Institut für Sexualwissenschaft, run by Jewish gay rights campaigner Magnus Hirschfeld) were burned, and homosexuals within the Nazi Party itself were murdered. 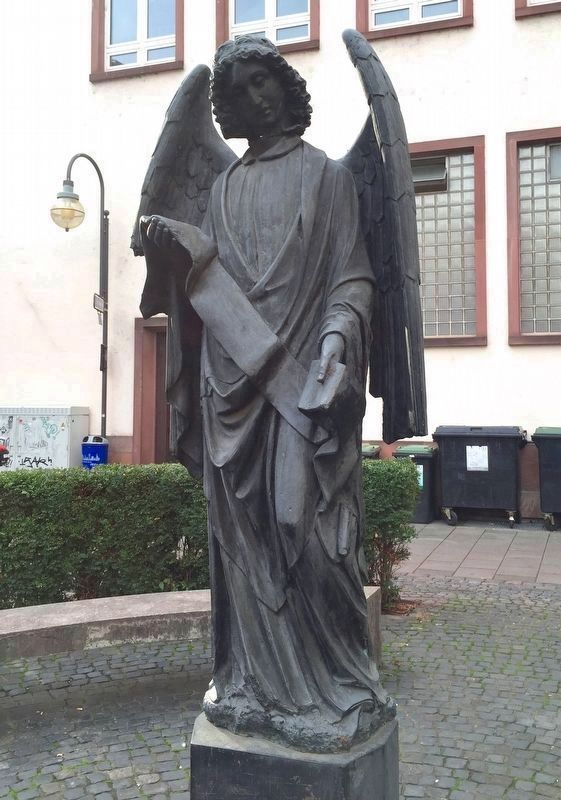 By Andrew Ruppenstein, November 22, 2016
3. Frankfurter Engel / Angel of Frankfurt
The original of the memorial is an "angel with a book", which originally belonged to a group of eleven angels that decorated the west portal of the Cologne Cathedral. The original no longer exists, only its damaged plaster model. A model made by the sculptor Peter Fuchs at the end of the 19th century was reproduced on a 1: 1 scale as a wax casting. After that Rosemarie Trockel, the artist, cut off the head of the angel and put it back slightly, so that the fracture was visible as a scar. The sculpture was cast in black-patinated bronze, together with an octagonal base, which is part of the sculpture. On it stands an inscription formulated by the initiators of the memorial, which identifies the crimes of the National Socialists against homosexual men and women. - Frankfurter-engel.de (in translation)
The Gestapo compiled lists of homosexuals, who were compelled to sexually conform to the "German norm.".... Between 1933 and 1945, an estimated 100,000 men were arrested as homosexuals, of whom some 50,000 were officially sentenced. Most of these men served time in regular prisons, and an estimated 5,000 to 15,000 of those sentenced were incarcerated in Nazi concentration camps. It is unclear how many of the 5,000 to 15,000 eventually perished in the camps, but leading scholar Rüdiger Lautmann believes that the death rate of homosexuals in concentration camps may have been as high as 60%.... (Submitted on December 6, 2016.)

2. Mahnmal Homosexuellenverfolgung (frankfurter-engel.de). Official website for the memorial, in German only, with extensive information on the memorial's history. (Submitted on December 6, 2016.)