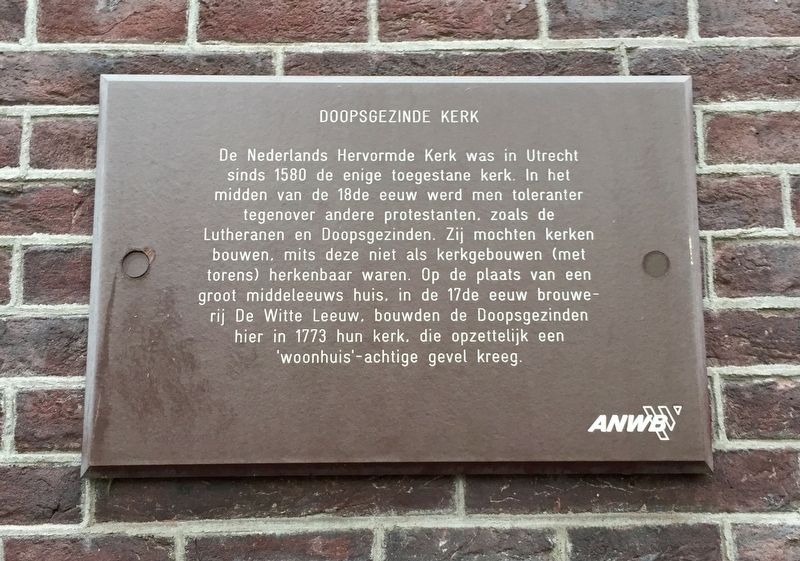 In Utrecht from 1580 onwards the only church authorized was the Dutch Reformed Church. ln the middle of the 18th century, more tolerance was shown towards other Protestants, such as the Lutherans and Mennonites, and they were allowed to build churches, provided they were not recognizable as church buildings (i.e, having towers). Formerly the site of a large medieval house that in the 17th century housed the brewery The White Lion, the Mennonites built their church here in 1773, deliberately giving it a "residence"-like facade.

Erected by The ANWB. 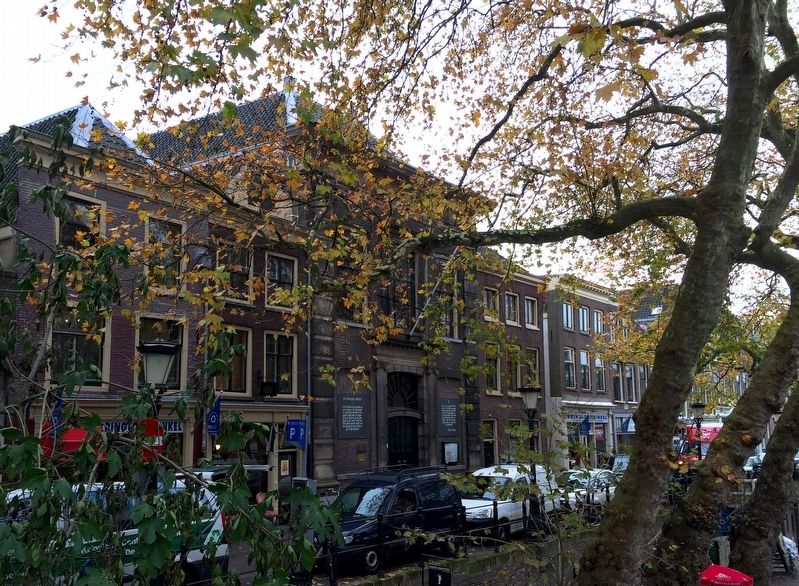 By Andrew Ruppenstein, November 23, 2016
2. Doopsgezinde Kerk / Baptist Church and Marker - Wide View
The marker is visible here to the left of the entrance.
is listed in this topic list: Churches & Religion.

Location. 52° 5.228′ N, 5° 7.327′ E. Marker is in Utrecht. Marker is on Oudegracht just north of Korte Smeestraat, on the right when traveling north. Touch for map. Marker is at or near this postal address: Oudegracht 270, Utrecht 3511, Netherlands. Touch for directions.

Also see . . .  Looking at Churches in Utrecht: Mennonite Church (Kerken Kijken Utrecht). This church building from 1773 looks like the front of a stately townhouse. Before being used as a church, it was home to a brewery. Over the course of the 18th century there was less resistance to non-reformed religious communities, yet the Mennonites built a facade to the building that was not typical of a church and in line with the religious principle of the Mennonites. The sober interior contains a mahogany pulpit by carpenter Wajon from 1773. The church council seats on both side of the pulpit are also original. The neo-rococo organ, built by Bätz and Witte, was granted in 1870. The church's design includes a ‘women’s section’. Until the dissolution of segregated seating in 1926, the women sat in the centre, surrounded by the men. This division of men and women is a moving reminiscence of the difficult times of the days of persecution. (Submitted on December 11, 2016.)
Credits. This page was last revised on December 11, 2016. It was originally submitted on December 11, 2016, by Andrew Ruppenstein of Sacramento, California. This page has been viewed 179 times since then. Photos:   1, 2. submitted on December 11, 2016, by Andrew Ruppenstein of Sacramento, California.
Share This Page.