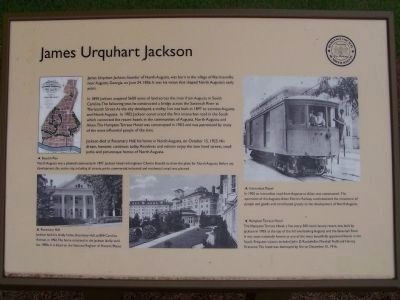 James Urquhart Jackson, founder of North Augusta, was born in the village of Harrisonville, near Augusta, Georgia, on June 24, 1856. It was his vision that shaped North Augusta's early years.

In 1890 Jackson acquired 5600 acres of land across the river from Augusta in South Carolina. The following year, he constructed a bridge across the Savannah River at 13th Street. As the city developed, a trolley line was built in 1897 to connect Augusta and North Augusta. In 1902 Jackson constructed the first interurban road in the South which connected the resort hotels in the communities of Augusta, North Augusta and Aiken. The Hampton Terrace Hotel was constructed in 1903 and was patronized by many of the most influential people of the time.

Jackson died at Rosemary Hall, his home in North Augusta, on October 15, 1925. His dream, however, continues today. Residents and visitors enjoy the tree lined streets, small parks and picturesque homes of North Augusta.

Topics. This historical marker is listed in these topic lists: Bridges & Viaducts 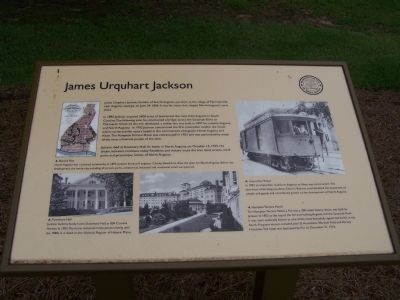 Click or scan to see
this page online
• Industry & Commerce • Railroads & Streetcars • Settlements & Settlers. A significant historical month for this entry is June 1540.

More about this marker. The marker was unveiled on April 27, 2007 during North Augusta's Yellow Jasmine Festival.

Regarding James Urquhart Jackson. The upper left picture on the marker shows the area covered under the Boeckh Plan. The accompanying caption reads, "North

The lower left picture is of Rosemary Hall. "Jackson built his family home, Rosemary Hall, at 804 Carolina Avenue, in 1902. The home remained in the Jackson family until the 1980s. It is listed on the National Register of Historic Places."

The lower right picture is of the Hampton Terrace Hotel. "The Hamton Terrace Hotel, a five-story, 300-room luxury resort, was built by Jackson in 1903 at the top fo the hill overlooking Augusta and the Savannah River. It was soon nationally known as one of the most beautifully appointed hotels in the South. Frequent visitors included John D. Rockefeller, Marshall Field and Harvey Firestone. The hotel was destroyed by fire on December 31, 1916."

The right-most picture, titled "Interurban Travel" is described by the caption, "In 1902 an interurban road from Augusta to Aiken was constructed. The operation of the Augusta-Aiken Electric Railway, revolutionized the movement of people and goods and contributed greatly to the development of North Augusta." 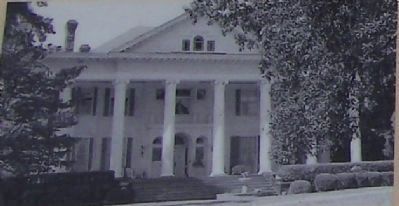 2. City of North Augusta celebrates centennial. A flood engulfed the North Augusta Community Center Thursday evening — welcome news for the community’s boosters, as the deluge came in the form of hundreds of visitors taking part in “A Night to Remember,” commemorating North Augusta’s 100th anniversary. (Submitted on March 17, 2009, by Brian Scott of Anderson, South Carolina.) 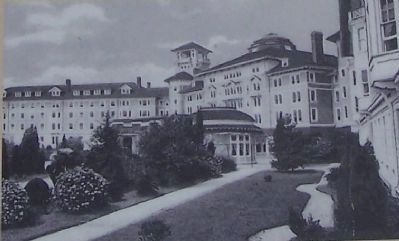 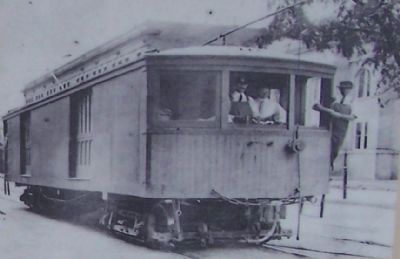