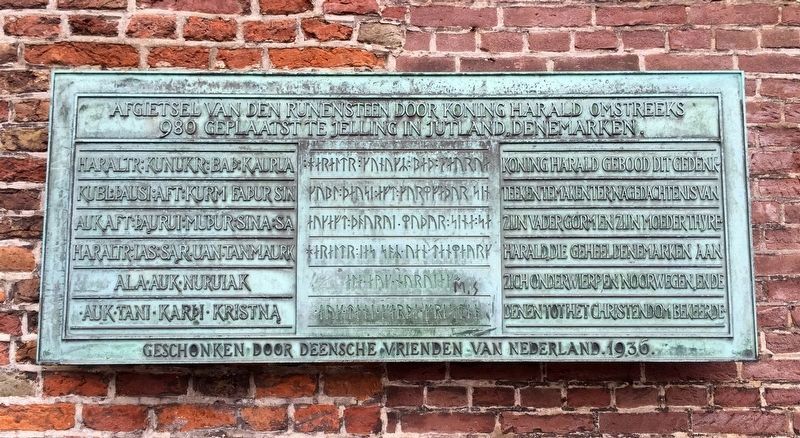 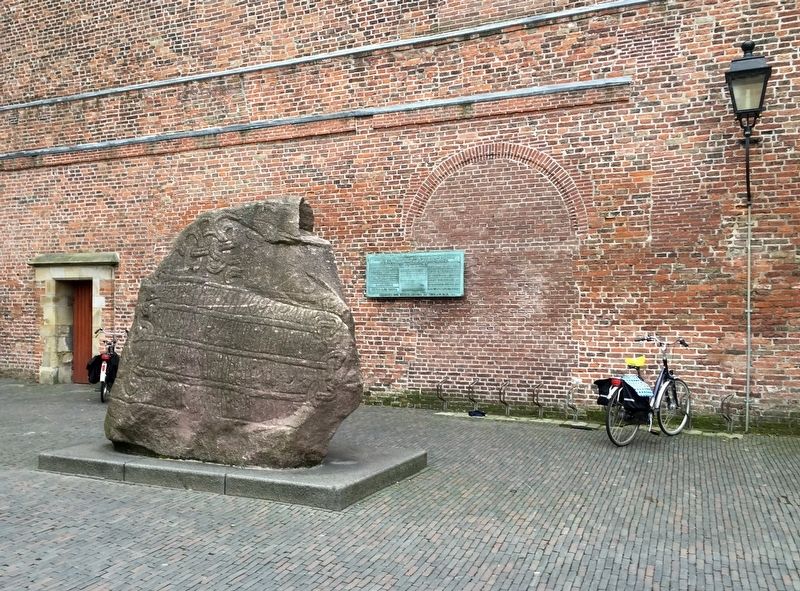 [English translation of the above:]

Top horizontal panel: A casting of the rune stone by King Harald placed in Jelling in Jutland, Denmark, about 980 A.D.

The left-middle vertical panel is a transliteration of the runes.

The mid-middle vertical panel is the actual rune text that is found on three sides of the stone.

The right-middle vertical panel is a translation of the runes into Dutch.

The runes may be translated thusly: King Haraldr ordered this monument made in memory of Gormr, his father, and in memory of Thyrvé, his mother; that Haraldr who won for himself all of Denmark and Norway and made the Danes Christian.

Lower horizontal panel: A gift of the Danish Friends of the Netherlands. 1936. 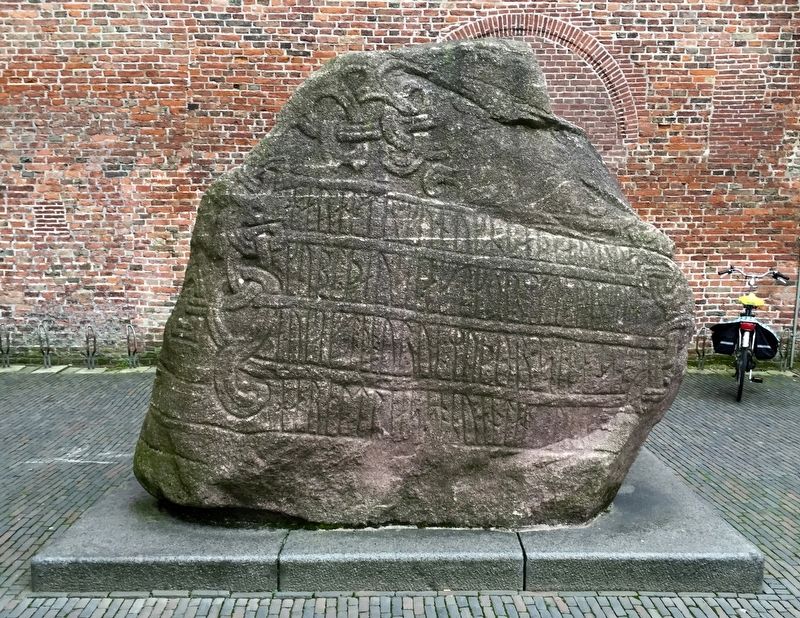 Location. 52° 5.43′ N, 5° 7.337′ E. Marker is in Utrecht. Marker can be reached from Domplein just north of Korte Nieuewstraat. Touch for map. Marker is in this post office area: Utrecht 3512, Netherlands. Touch for directions.

More about this marker. The marker is attached to the cloister wall that attaches cathedral to the university. The marker and stone were dedicated on June 22, 1936, and were a gift to the University of Utrecht on its 300th anniversary. Translation of the runes themselves is courtesy of the Samnordisk Runtextdatabas. 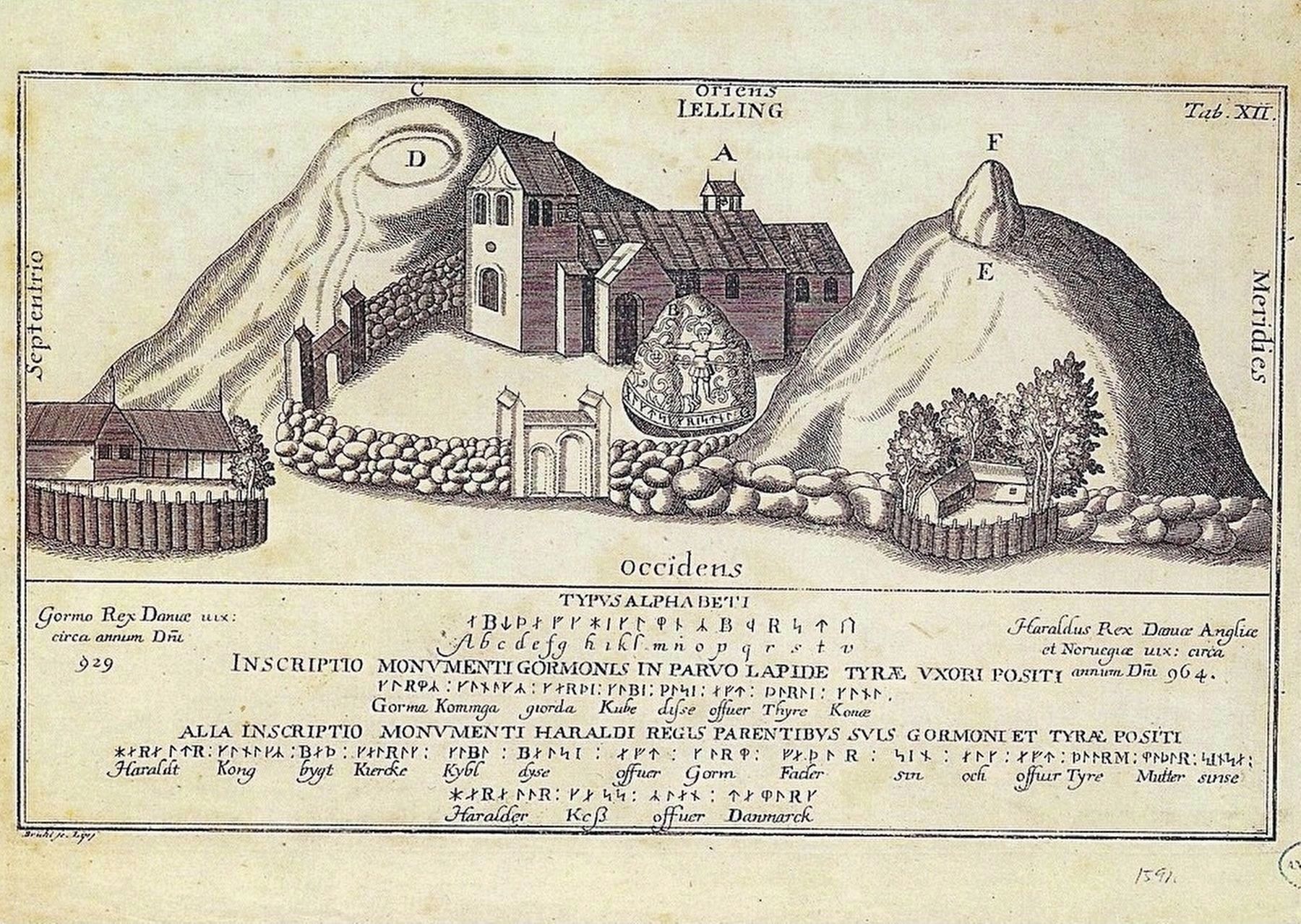 Henrik Rantzau (image courtesy of the National Museum of Denmark), circa 1591
4. A View of Jelling, showing the original Jelling Stones, on site in Jelling, Denmark
The Jelling stones (Danish: Jellingstenene) are massive carved runestones from the 10th century, found at the town of Jelling in Denmark. The older of the two Jelling stones was raised by King Gorm the Old in memory of his wife Thyra. The larger of the two stones was raised by King Gorm's son, Harald Bluetooth in memory of his parents, celebrating his conquest of Denmark and Norway, and his conversion of the Danes to Christianity. The runic inscriptions on these stones are considered the best known in Denmark....The Jelling stones stand in the churchyard of Jelling church between two large mounds. The stones represent the transitional period between the indigenous Norse paganism and the process of Christianization in Denmark; the larger stone is often cited as Denmark's baptismal certificate (dåbsattest), containing a depiction of Christ. They are strongly identified with the creation of Denmark as a nation state and both stones feature one of the earliest records of the name "Danmark" (in the form of accusative "tanmaurk" ([danmɒrk]) on the large stone, and genitive "tanmarkar" (pronounced [danmarkaɽ]) on the small stone). - Wikipedia
Credits. This page was last revised on December 22, 2016. It was originally submitted on December 22, 2016, by Andrew Ruppenstein of Sacramento, California. This page has been viewed 281 times since then and 7 times this year. Photos:   1, 2, 3, 4. submitted on December 22, 2016, by Andrew Ruppenstein of Sacramento, California.
Share This Page.