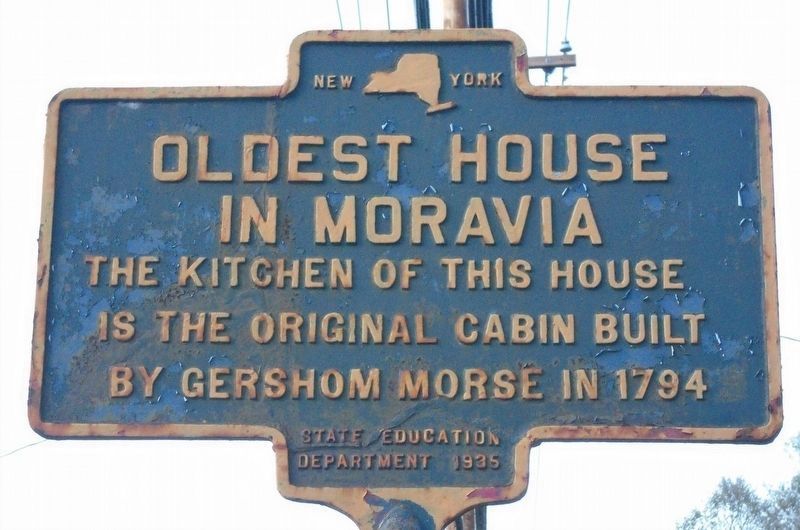 The kitchen of this house
is the original cabin built
by Gershom Morse in 1794.

Topics. This historical marker is listed in this topic list: Notable Buildings. A significant historical year for this entry is 1794.

Also see . . .  Historic and Architectural Resources of Village of Moravia, N.Y. (National Park Service). A 1992 inventory created with for the purposes of delineating historic districts in the town. "There are few intact examples of architecture in the village which reflect the initial period of settlement. Portions of the Morse farmhouse and the Cotton Spinner House may container 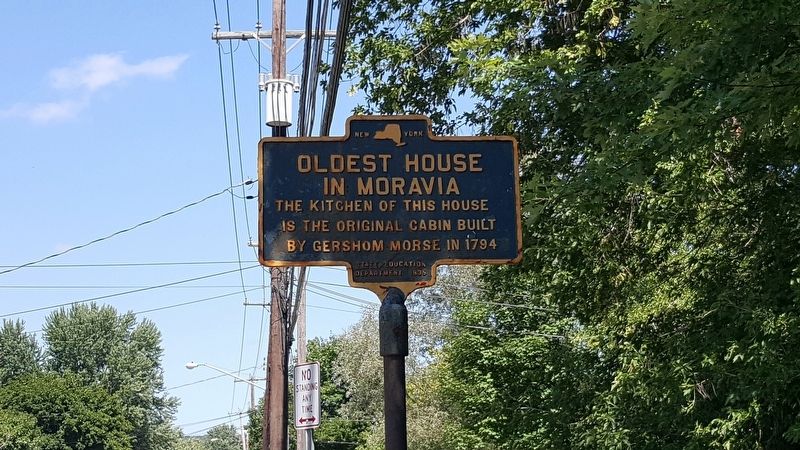 Click or scan to see
this page online
remnants of early cabins built in the 1790's or 1800's.", (p. E2); "Gershom Morse...purchased land in the southern part of the village in 1794. Like Stoyell, Morse was a prominent citizen, a large landowner, farmer, and Justice of the Peace. His house still stands on South Main Street. The main block of the house, built c. 1830, retains significant detailing in the interior, and incorporates a rear ell which is believed to contain Morse's original cabin.", (p. E2-3, see also pp. F5-6).

The accuracy of the the marker title, "Oldest House...", as well the neighboring house's commercial title, "Oldest House in Moravia B&B", may be one of interpretation - see - Ship of Theseus for different perspectives. As to the B&B's claims to being the "oldest", dating back to 1794 according to their Facebook page, it should be noted that there is seemingly nothing within the NPS document to support that claim. (Submitted on December 26, 2016, by Andrew Ruppenstein of Sacramento, California.)

Additional commentary.
1. Different house?
Believe the "Oldest House in Moravia" is now a B&B at 52 S. Main St., across the street from photo #2, and behind some trees. See: link for Tour Cayuga County - Where to Stay - for photo and B&B listing. Its name is actually "Oldest House in Moravia B & B".
— Submitted December 25, 2016, by Mark Hilton of Montgomery, Alabama. 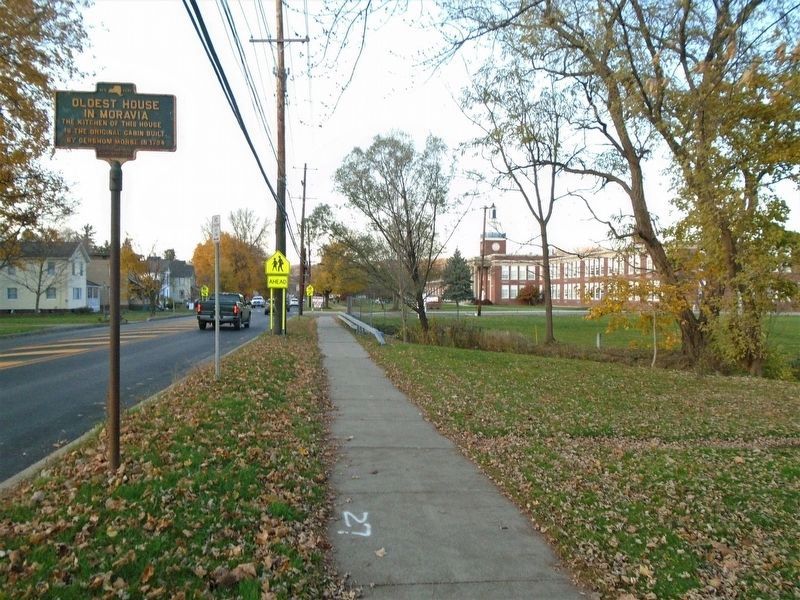 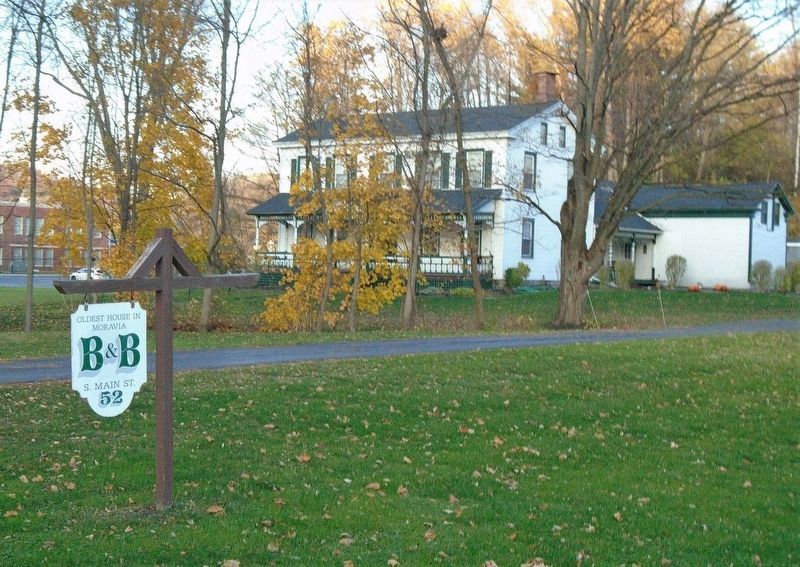 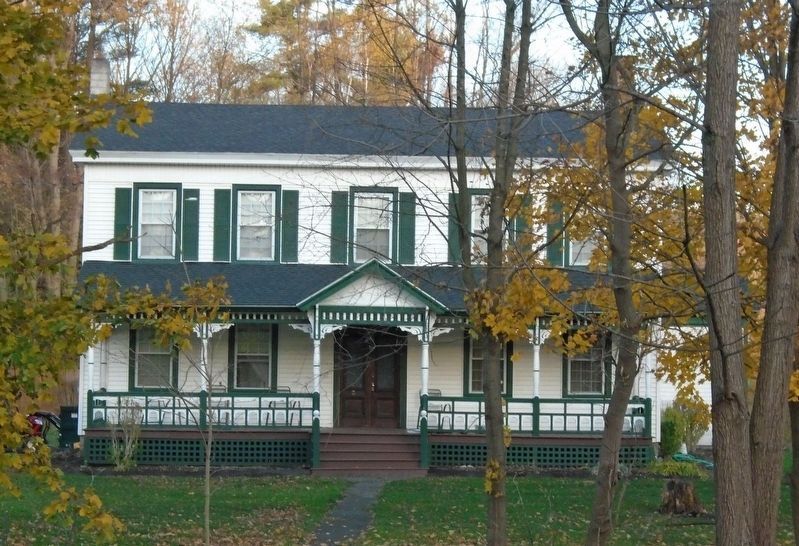 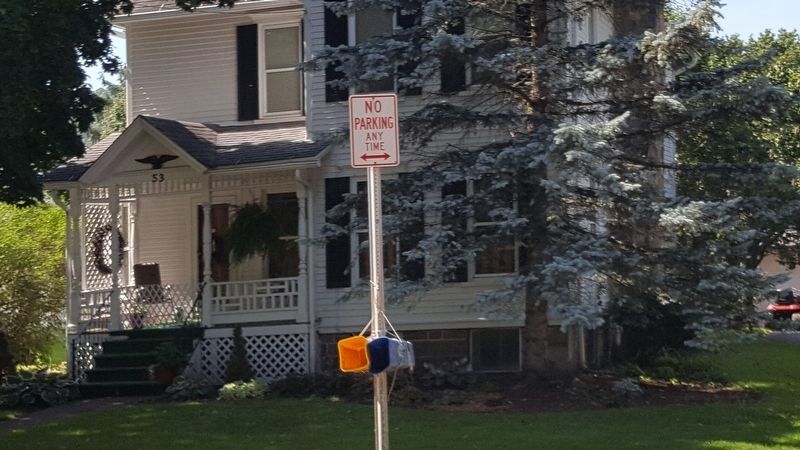 Editor’s want-list for this marker. Photo of Oldest House in Moravia. • Can you help?
Share this page.