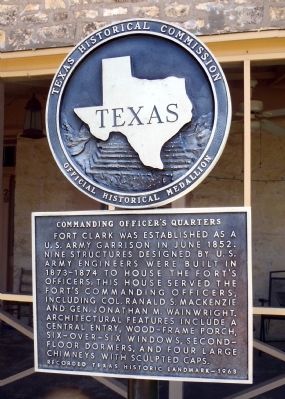 Location. Marker has been reported missing. It was located near 29° 18.235′ N, 100° 25.405′ W. Marker was near Brackettville, Texas, in Kinney County. Marker was on Colony Row, on the right when traveling east. Marker is located on Fort Clark Springs in the Fort Clark National Register Historic District and is accessible to the public. The subject of the marker is a private residence. Touch for map. Marker was at or near this postal address: 29 Colony Row, Brackettville TX 78832, United States of America. Touch for directions. 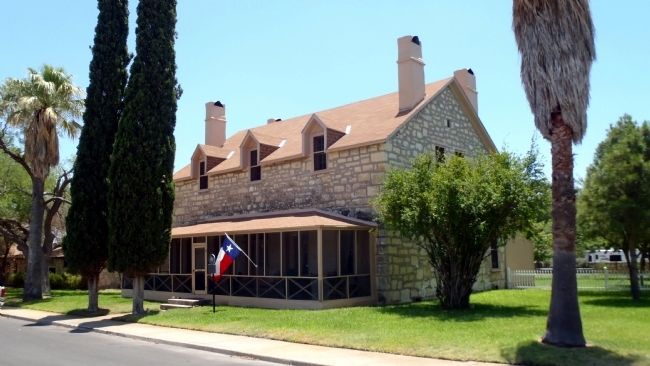 Regarding Commanding Officer's Quarters. The Commanding Officer’s Quarters was built by the United States Army in 1873 of local limestone and is a contributing structure to the National Register Historic District of Fort Clark. Today, the property continues to fulfill its original intended purpose of family housing. This imposing residence is an enduring element of the landscape of Fort Clark and still commands the parade ground today as the home’s notable occupants did in years past.

It remains an Army tradition to name the prominent quarters on each post in honor of the highest ranking officer to have resided within its walls. As a result several posts have a Pershing House. However, only one post has a Wainwright House. These quarters were first occupied by Colonel Ranald S. Mackenzie,

Courtesy Old Guardhouse Museum, circa 1890s
3. 19th century historic view with Commanding Officer's Quarters in the foreground
who as a bachelor and workaholic no doubt had little use for its seven bedrooms. Another well-known occupant of the 1870s was William R. “Pecos Bill” Shafter. Throughout the remainder of the 19th century the senior officer of the post, usually a Colonel commanding a regiment, called these quarters home. It was indeed a privilege for junior officers such as Lieutenant Francis H. French of the 19th Infantry to be invited to dine with the Colonel and his lady in the grandest quarters on the post.

In 1922 the quarters were designated for the Commanding Officer of the 1st Cavalry Brigade, a brigadier general. It was in that assignment that Jonathan Wainwright occupied the quarters from December 1938 until September 1940. Major General Harry H. Johnson, first cousin of Lyndon Baines Johnson, commanding the 2nd Cavalry Division lived here 1943-44. Not to be outdone by famous military men, John Wayne selected the home as his residence during the filming of his epic The Alamo in 1959. 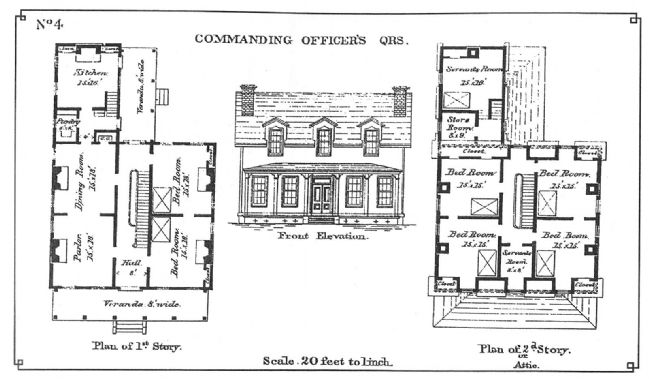 National Archives, circa 1872
4. Commanding Officer's Quarters Plan
Quartermaster General Montgomery C. Meigs recommended Model Plan No4 for Commanding Officer’s quarters to the Secretary of War in 1872. These model plans were modified or even ignored at many western posts, but at Fort Clark they were followed in every detail by the post commander, Colonel Ranald S. Mackenzie, 4th Cavalry.
Military • 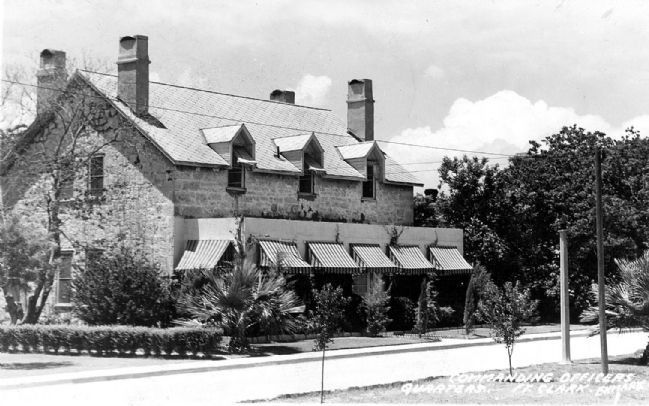