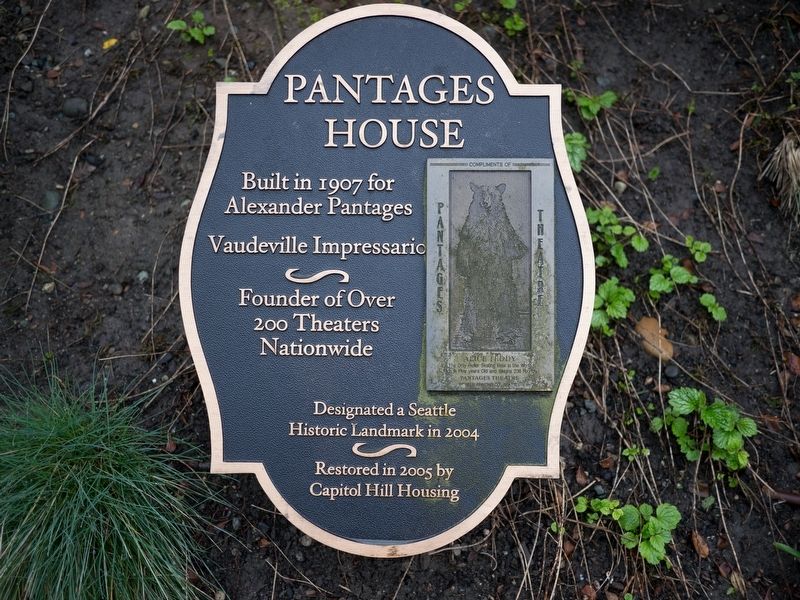 By Rob Ketcherside, April 7, 2017
1. Pantages House Marker
Inscription.
Pantages House. .
Built in 1907 for Alexander Pantages, Vaudeville Impressario, Founder of Over 200 Theaters Nationwide, Designated a Seattle Historic Landmark in 2004, Restored in 2005 by Capitol Hill Housing. . This historical marker was erected in 2005 by Capitol Hill Housing. It is in Seattle in King County Washington

Built in 1907 for
Alexander Pantages

Founder of Over
200 Theaters
Nationwide

Designated a Seattle Historic Landmark in 2004

Restored in 2005 by Capitol Hill Housing

Topics. This historical marker is listed in these topic lists: Entertainment • Notable Buildings. A significant historical year for this entry is 1907.

Other nearby markers. At least 8 other markers are within walking distance of this marker. George Ward House (about 600 feet away, measured in a direct line); Broadway High School (approx. 0.2 miles away); Chrysler Building (approx. ¼ mile away); Japanese American Remembrance Garden (approx. half a mile away); Gerard Schwarz (approx. 0.8 miles away); Bruce Pavitt and Jonathan Poneman (Sub Pop Records)

More about this marker. To the east of the corner steps, in the landscaping.

Regarding Pantages House. The house was incorporated into a new apartment building and they are now both collectively referred to as Pantages Apartments.

Editor’s want-list for this marker. Wide area view of the marker and its surroundings. • Photo of the building. • Can you help?
Share This Page.