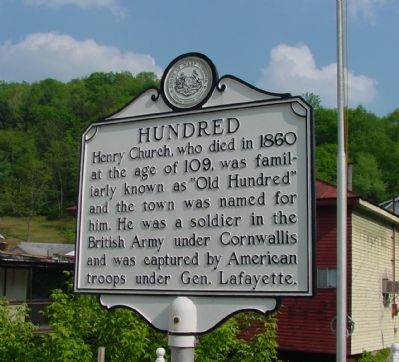 By J. J. Prats, May 15, 2007
1. Hundred Marker
Inscription.
Hundred. . Henry Church, who died in 1860 at the age of 109, was familiarly known as “Old Hundred” and the town was named for him. He was a soldier in the British Army under Conrwallis and was captured by American troops under Gen. Lafayette. . This historical marker is in Hundred in Wetzel County West Virginia

Henry Church, who died in 1860 at the age of 109, was familiarly known as “Old Hundred” and the town was named for him. He was a soldier in the British Army under Conrwallis and was captured by American troops under Gen. Lafayette.

Topics and series. This historical marker is listed in these topic lists: Political Subdivisions • Settlements & Settlers • War, US Revolutionary. In addition, it is included in the West Virginia Archives and History series list. A significant historical year for this entry is 1860.

Location. 39° 41′ N, 80° 27.504′ W. Marker is in Hundred, West Virginia, in Wetzel County. Marker is at the intersection of Main Street (U.S. 250) and Pennsylvania Avenue (West Virginia Route 69), on the left when traveling south on Main Street. Touch for map. Marker is in this post office area: Hundred WV 26575, United States of America. Touch for directions.

Other nearby markers. At least 5 other markers are within 7 miles of this marker, measured as the crow flies. Hundred World War II Veterans Memorial (within shouting distance of this marker); The B&O Connection (about 300 feet away, measured in a direct line); Littleton War Memorial (approx. 3.3 miles away); Marion County / Wetzel County 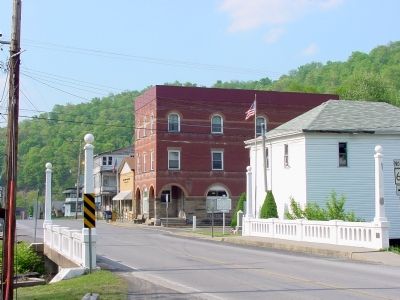 Click or scan to see
this page online
(approx. 3.6 miles away); The West Warren Baptist Church (approx. 6.3 miles away). Touch for a list and map of all markers in Hundred.

Regarding Hundred. “Henry Church would sit on a rocking chair on his porch near the train station. As the train came into the station, people would say ‘There’s old Hundred,’ referring to his age. Eventually the name stuck and the station—and the town—became known as Hundred.” —from the Hundred entry in Wikipedia.

The railroad that passed through Hundred was the Baltimore and Ohio Railroad, a branch line from Wheeling to Grafton via Fairmont. Today the former railroad right-of-way through town is a paved biking and hiking trail.

Hundred is on U.S. 250 between Wheeling and Fairmont. The road from Waynsburg, Pennsylvania, (PA Route 18 then WV Route 69) terminates in Hundred. WV Route 7 between New Martinsville on the Ohio River and Morgantown crosses Route 250 at the south end of town. Hundred was once an important crossroads. 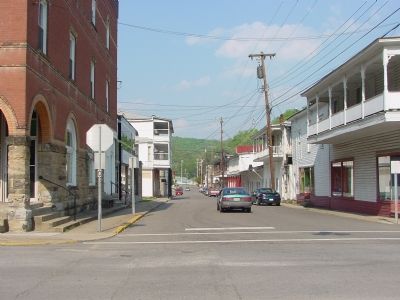 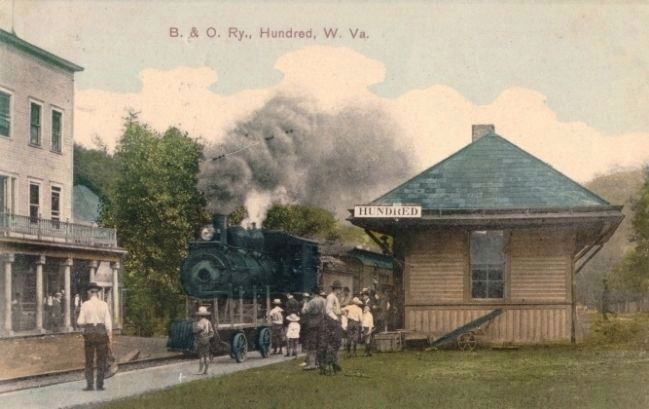 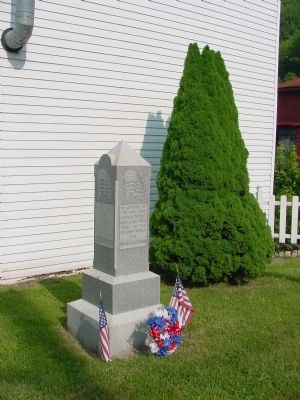