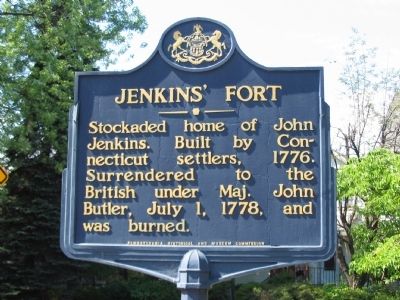 By Craig Swain, July 25, 2008
1. Jenkins' Fort Marker
Inscription.
Jenkins' Fort. . Stockaded home of John Jenkins. Built by Connecticut settlers, 1776. Surrendered to the British under Maj. John Butler, July 1, 1778, and was burned. . This historical marker was erected in 1947 by Pennsylvania Historical and Museum Commission. It is in West Pittston in Luzerne County Pennsylvania

Stockaded home of John Jenkins. Built by Connecticut settlers, 1776. Surrendered to the British under Maj. John Butler, July 1, 1778, and was burned.

Topics and series. This historical marker is listed in these topic lists: Forts and Castles • War, US Revolutionary. In addition, it is included in the Pennsylvania Historical and Museum Commission series list. A significant historical date for this entry is July 1, 1778.

Location. 41° 19.665′ N, 75° 47.579′ W. Marker is in West Pittston, Pennsylvania, in Luzerne County. Marker is at the intersection of Wyoming Street (U.S. 11) and Exeter Avenue (State Highway 92), on the right when traveling west on Wyoming Street. Located at the west end of Fort Jenkins Bridge, at a three way intersection of Wyoming, Exeter, and Susquehanna Avenues. Touch for map. Marker is in this post office area: Pittston PA 18643, United States of America. Touch for directions.

Other nearby markers. At least 8 other markers are within walking distance of this marker. A different marker also named Jenkins Fort (here, next to this marker); The Greater Pittston Coal Miner (approx. ¼ mile away); World War Memorial 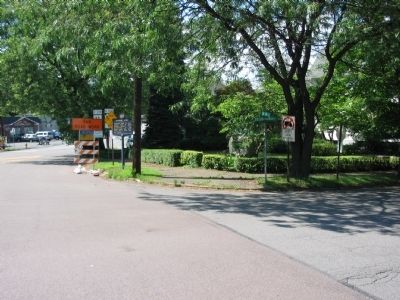 Also see . . .  Jenkins' Fort. Section from the Report of the Commission to locate the site of Frontier Forts. The fort was named after John Jenkins, who's house was expanded to form this stockade. (Submitted on August 20, 2008, by Craig Swain of Leesburg, Virginia.) 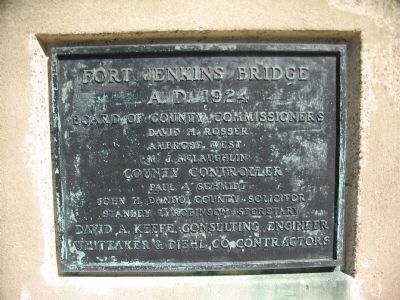 By Craig Swain, July 25, 2008
3. Fort Jenkins Bridge Cornerstone
Located nearby and duplicated on the east end of the bridge also. The bridge dates to the 1920s. 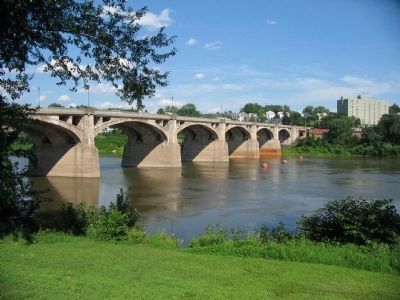