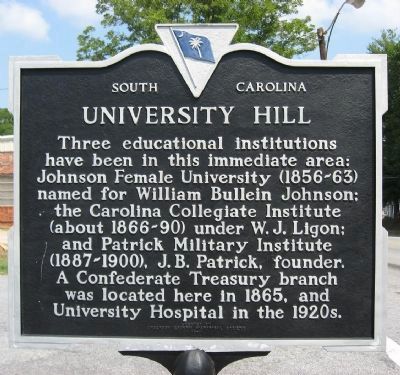 Photographed By Ronald Miller, August 18, 2008
1. University Hill Marker
Inscription.
University Hill. . , Three educational institutions have been in this immediate area: Johnson Female University (1856-63) named for William Bullein Johnson; the Carolina Collegiate Institute (about 1866-90) under W. J. Ligon; and Patrick Military Institute (1887-1900), J. B. Patrick, founder. A Confederate Treasury branch was located here in 1865, and University Hospital in the 1920s. . This historical marker was erected in 1970 by Anderson County Historical Society. It is in Anderson in Anderson County South Carolina

Three educational institutions have been in this immediate area: Johnson Female University (1856-63) named for William Bullein Johnson; the Carolina Collegiate Institute (about 1866-90) under W. J. Ligon; and Patrick Military Institute (1887-1900), J. B. Patrick, founder. A Confederate Treasury branch was located here in 1865, and University Hospital in the 1920s.

Topics and series. This historical marker is listed in this topic list: Education. In addition, it is included in the South Carolina, Anderson County Historical Association/Society series list. A significant historical year for this entry is 1865.

Other nearby markers. At least 10 other markers are within walking distance of this marker. Anderson Boys' High School (approx. 0.2 miles away); McDuffie High School 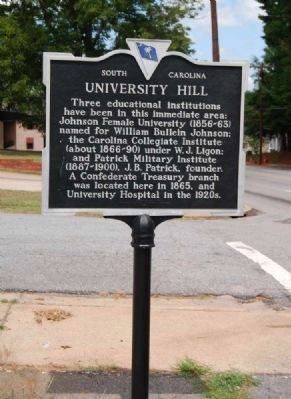 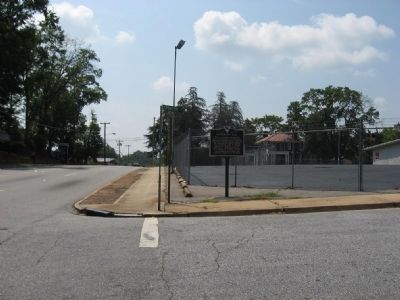 Photographed By Ronald Miller, August 18, 2008
3. University Hill Marker
2. William Bullein Johnson. Wikipedia entry:
William Bullein Johnson (13 June 1782 - 2 October 1862) was one of the founders of the South Carolina State Baptist Convention in 1821, and later was the first president of the Southern Baptist Convention from 1845 to 1851. (Submitted on September 25, 2010, by Brian Scott of Anderson, South Carolina.)

Additional commentary.
1. The Lost Confederate Treasury
As the marker states, Anderson was home to one of the Confederate Treasuries. On May 1, 1865, Union troops arrived in Anderson. Their mission was singular: find the Confederate Treasury. This was the easy part. What troubled the Union soldiers (and delighted the locals) was that the treasury (represented in gold) was gone. When the soldiers broke into the basement room located in the now-gone B.F. Crayton Building, they discovered cases of liquor but no gold. The Union troops got drunk on the liquor and decided not to burn down the town.

On this same date, just northeast of Anderson, a Union cavalry group on patrol with the units from Anderson, met and fought with a group of Citadel Cadets. This encounter is documented in the "Confederate Skirmish" marker, located in Williamston, 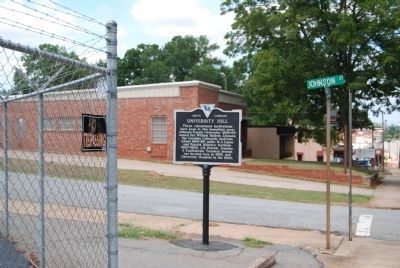 Sir: I have the honor to submit the following report of an inspection of the military department of the Patrick Military Institute. made the 20th and 21st instants in accordance with the instructions 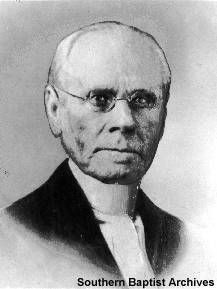 The institution was established in 1870, and confers the diploma of the Institute with the distinction of "English graduate on those who pass the examination in English an in mathematics," and of "full graduate" on those who in addition complete the course prescribed in two languages. It is not endowed under the act approved July 2. 1862, and receives no income from that source.

The military professorship was established April 25, 1891,and the chair is now filled by Lieut. T.Q. Donaldson, Jr., Seventh Cavalry, who has been on duty since June 25, 1891. He resides at the institute, and, when in the performance of military duties, wears his uniform. He is a member of the faculty, and is employed by the institute as instructor in mathematics and drawing. All rules and orders affecting the military department, and all appointments and promotions of officers and non-commissioned officers are made by the professor of military science and tactics, who also has authority to remove.

Proper military discipline is enforced at all times when the students are under military instruction. Breaches of discipline and misconduct are punished by confinement to limits of school, extra tour of guard, reprimands public and private, and demerits.

The course of instruction is both theoretical 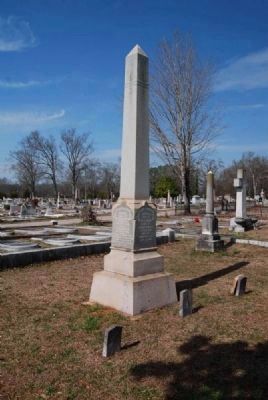 Photographed By Brian Scott, January 31, 2012
6. William Jackson Ligon Tombstone
President of the Carolina Collegiate Institute
William Jackson
Ligon
Born at
Prince Edward
C.H. Virginia
Feb. 12th 1830
Died at
Anderson, S.C.
Jan 19th 1891.
He was a faithful and
successful teacher from
the time he graduated
from So. Ca. College in 1849
until 1890.
and practical and occupies 2 hours per week for theoretical instruction, and 3½ hours per week for practical instruction. Attendance is compulsory on all who are above 14 years of age. Proficiency in the military department is not requisite to enable a student to receive his diploma, nor does it affect his standing as a student.

Facilities for military instruction comprise 107 cadet rifles, muzzle and breech loaders, and the necessary accouterments—the property of the State. The drill ground is small and insufficient for the extended-order formations. There are no means of instruction in artillery or signal drill.

There has been instruction in the duties of advance and rear guards, and since the 1st of October a garrison guard consisting of 3 non-commissioned officers and 7 privates has been mounted daily. Theoretical instruction has been given in guard duty, the infantry drill regulations, small-arms regulations, and the organization of the army.

Total number of recitations, 42. Average daily attendance at each recitation, 20. Number of examinations, 1 at end of year.

The total number of students enrolled 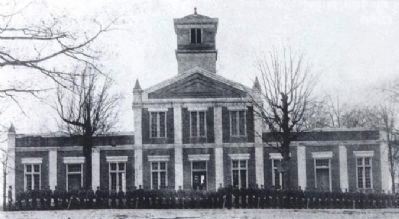 South Carolina Postcards, Vol. IX: Anderson County, by Howard Woody, circa 1893
7. University Hill
This structure on South Main Street was initially built for the Johnson Female academy in 1853. At the end of the Civil War it was used to store part of the Confederate Treasury and then became headquarters for Union troops garrisoned in Anderson during the Reconstruction era. Next it became W.J. Ligon's Carolina Collegiate Institute for boys in 1866. In 1889 Col. John B. Patrick moved his Patrick Military Academy from Greenville to this Anderson campus. After the academy closed the building was razed.
in the institution during the past year has been 118, all males. Of the total number of students capable of performing military duty there have been 101 under military instruction, being 85.6 per cent, of the entire number.

The average attendance at each infantry drill has been 75; target practice, 30: ceremonies, 75.

The students are organized into an infantry battalion, composed of 1 adjutant, 1 sergeant major, 1 color sergeant, and 3 companies. The uniform consists of the West Point cadet gray, dress and undress coats, the buttons, shako, and white belts excepted, and is worn by resident cadets at all times and by day cadets when under military instruction.

At inspection there were no students out of uniform. The arms and accouterments were not generally in good condition. The uniform was neat and becoming.

The reports required by general orders, No. 26, 1891, have been regularly rendered: copies of these reports and all correspondence are on file.

The following-named students of last year having shown special aptitude were reported to the Adjutant-General of the army, and a copy sent to the adjutant-general of the State for his information: Benjamin S. Patrick, cadet captain; William F. Brunson, cadet captain; Henry E. Richbourg, cadet lieutenant. The names of the three most distinguished 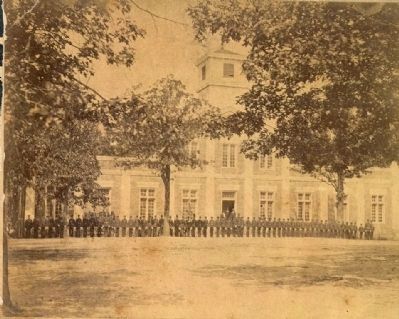 Photographed By Brian Scott
8. Patrick Military Institute
students in military science during the year have not yet been determined.

The attitude of the authorities and students toward the military department is very friendly.

The battalion was reviewed, inspected, and exercised in the infantry drill regulations, in close and extended order, and made a very good appearance. The set up of the cadets is above the average, and but few with round shoulders were noticed. More attention should be paid to the nomenclature of the rifle, which is important. Every cadet should understand his arms and accoutrements thoroughly. After the drill the dispositions of an advanced guard were made rapidly and creditably.

A feature of the military instruction given here, which is quite exceptional, is the mounting of a daily guard, to which attention has been already called. The guard is under the supervision of a cadet officer of the day and observes the general regulations prescribed in the manual of guard duty. Two sentinels are regularly posted in the halls of the cadet barracks during study hours. No better way of inculcating obedience to lawful military authority while teaching an important military duty can be devised. It should be applied generally in all colleges where military instruction is given.

As has been already remarked, neither military discipline nor 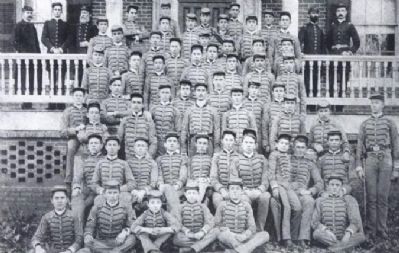 South Carolina Postcards, Vol. IX: Anderson County, by Howard Woody, circa 1896
9. Cadets, Patrick Military Academy
“This picture of the Patrick Military Academy cadets was taken after Col. John N. Patrick moved his military academy from Greenville to the Anderson campus in 1889. He was the president of the academy. In 1896 it was considered one of the best schools in Anderson. It closed in 1899.”
instruction under existing rules affect the class standing of a student or his chances of receiving a diploma. This is believed to be a defect which should be remedied, and which the authorities of the school will consider.

This is the second year of military instruction in the Patrick Military Institute by an officer of the regular army, and Col. Patrick and Lieut. Donaldson may be congratulated in all sincerity on the success of their efforts in the military department.

J.P. Sanger, Major, Inspector-General.
The Inspector-general, U.S. Army, Washington, D.C.
— Submitted September 25, 2010, by Brian Scott of Anderson, South Carolina.
4. The Patrick Military Institute
When he was in his graduating year at the South Carolina Military Academy, Col. J.B. Patrick first conceived the idea of organizing a Military School of his own. It was not, however, until 1878, twelve years after he had been busily engaged in school work, that he adopted the military feature. In that year the " Greenville High School" was converted by Col. Patrick into the " Greenville Military Institute," and the curriculum enlarged so as to meet the wants of the great majority of young men preparing for the duties 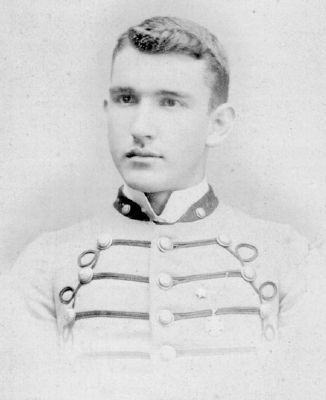 The Greenville Military Institute labored under the disadvantage of imperfect barracks and insufficient military equipments, but continued its work, doing the best its circumstances allowed until, by 1887, it had graduated twentyone of its Cadets, of whom one is now a Professor in Brown University of Rhode Island, and two are missionaries in Mexico.

In 1887, in order to secure better quarters for the Institute, it was transferred to Anderson, S.C., and its name changed to "Patrick Military Institute," after its devoted founder.

Here the Institute happily found a suitable seat. For the last five years the School has been in a prosperous condition, and gives indication of increased and increasing growth. In 1891 Col. Patrick succeeded in getting the War Department to detail an army officer as "Professor of Military Science and Tactics at the Patrick Military Institute." This officer, Lieut. Donaldson, reported for duty in June 1891, and is still serving at the Institute.

Of late, in order to meet the demands of a growing popularity, the building accommodations of the Institute have been 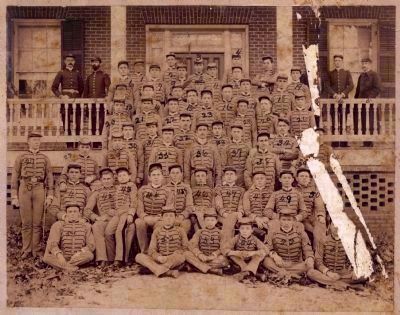 Stuart Paine Collection, circa 1892
11. Cadets, Patrick Military Institute
Stuart Paine of Arlington, Virginia, submitted this photograph after seeing Photo No. 7 on this page. The two photographs are identical. Annotated by Richard Gantt Paine, Cadet No. 1 on the photograph and Mr. Paine's grandfather. He wrote the names on the back. The names have been transcribed in Comment No. 5 elsewhere on this page. (Click on the photo to zoom in and see the faces and numbers clearly.)
increased. The graduates of the Patrick Military Institute have been thirty-one in number, making with the twenty-one graduates of the Greenville Military Institute, fifty-two in all.

The Patrick Military Institute stands now on an assured basis. The devoted Principal, a man of earnest purpose and of high character, is assisted by an energetic son and an accomplished corps of instructors. The friends of sound education will wish for this Institute a continued career of honor and usefulness. (Source: The History of the South Carolina Military Academy, with Appendixes by John Peyre Thomas (1893) pgs 528-529.)
— Submitted September 25, 2010, by Brian Scott of Anderson, South Carolina.
5. Patrick Military Institute Group Photo
RG Paine’s roster (June 1891 – June 1892)
Recorded by Richart Gannt Paine, Cadet No. 1 on the roster. Transcribed from the back of Photo No. 8 by Stuart Paine, his grandson. Notes in [brackets] are Stuart Paine’s. 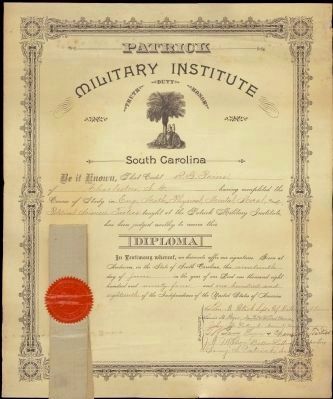