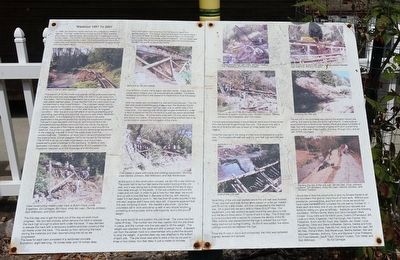 In 1998, the Swanton Pacific Railroad was blessed by Mother Nature. The high water floods caused by the El Niño weather phenomenon washed away about 200 feet of creek bank along Scotts Creek. The SPRR main line runs about one mile along the normally pleasant Scotts Creek. During this particular storm the creek rose over twelve feet and eroded thousands of yards of soil from the creek's bank.
This section of Scotts Creek changed its course a few years earlier, and the track bed was moved further into the hill to get away from the creek. Part of the exposed bank had a layer of coarse sand that was easily washed away. It was decided that the creek bank must be stabilized to stop future erosion. The proposed design was to build a trestle for the track, construct a live crib wall and then back fill the crib wall, and trestle to put the area back into its original condition. After two-and-one-half years of continual planning and permitting, permitting and planning, the permit was finally obtained to start work. It is interesting to note that more funds were expended in the permit phase than during the construction phase. The permit was issued 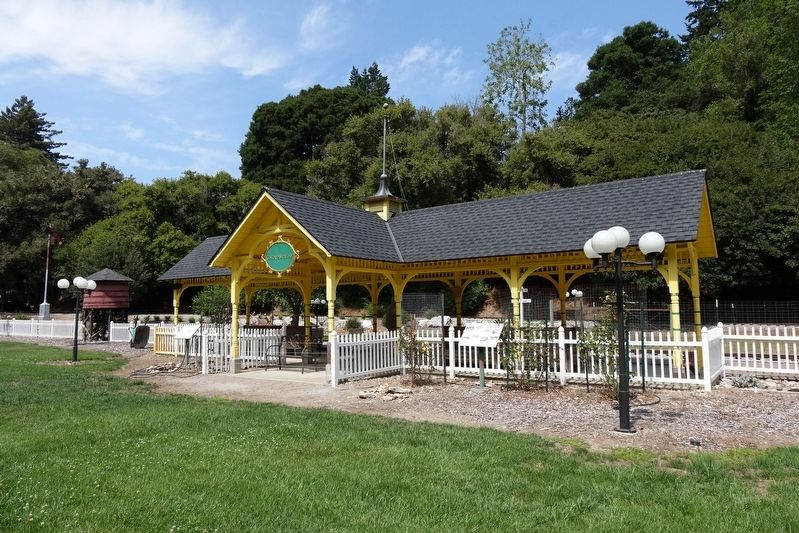 Click or scan to see
this page online
mid-August, and all work had to be completed and equipment removed from the site by the end of October. Because of the fragile riparian zone in and around the washout, the governing agencies would only allow large equipment in the creek for one day to divert the creek away from the construction site. Therefore, all work had to be accomplished from the creek's bank, and all supplies had to be hauled by the railroad. The SPRR is an all volunteer organization and this project present a great challenge to the members. A cadre of very dedicated volunteers, under the leadership of our president Fitz Fitzpatrick, stepped up to the challenge and did the work.
The first step was to get the track out of the way so worked could progress. We had two choices, either remove the track or elevate the track high enough to allow work under the track. It was decided to elevate the track with a temporary scaffold and then construct the rail trestle under the track. This saved us from removing the track, storing the materials and then reconstructing the rail as we progressed.
The base for each bent consisted of a reinforced concert foundation, eight feet long, 16 inches wide, and 18 inches deep. Each foundation has to be dug into the bank to reach firm undisturbed soil. The design required that each foundation have four posts at least 18 inches below the foundation for horizontal stability 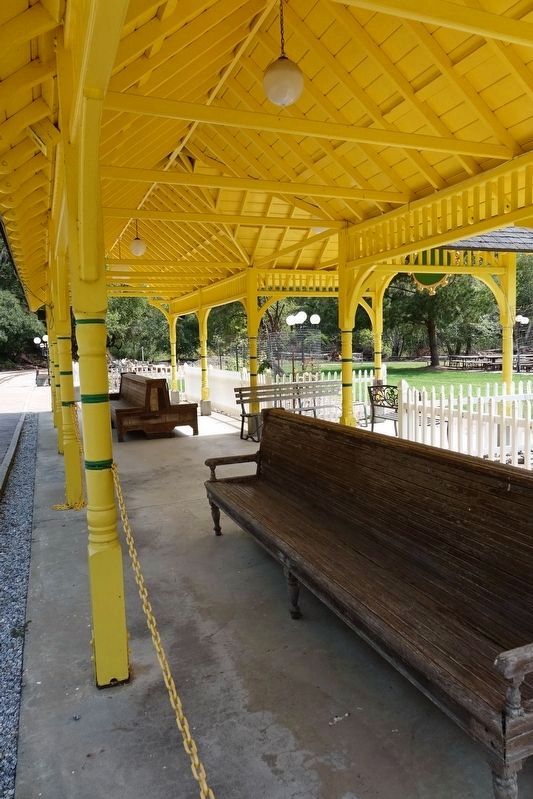 Photographed By Barry Swackhamer, August 2, 2017
3. Swanton Pacific Railroad boarding station
because of the steep slop of the bank. As the trestle was constructed, the temporary scaffold was removed and the track was lowered into place on top of the trestle.
The SPRR's 1/3 size crane was a real labor saver. It was able to place heavy timbers and move equipment as needed. The trestle looked so good that it was a shame to have to bury it as the design required.
After the trestle was completed the real work commenced. The crib wall was constructed from pine timber cut on the Swanton Pacific Ranch. The bottom layer had two logs, one on either side of the outer post. The next log was set at right angles to the first in order to form a deadman tie into the bank to a post set about seven feet from the front face. All joints were pined with 1/2 inch rebar drilled and driven into place. A temporary load-carrying scaffold had to be constructed to support the outriggers of the crane.
At this point, in the construction process, we ran into a real dilemma. The posts had to be four feet below the bottom footing of the crib wall, and it was taking two or three people most of the day to dig a hole deep enough of the posts. In the wet conditions around the creek and crib wall, in order to get a hole four feet deep, we would end up with a hole five feet in diameter at the top, with standing water 3.5 feet deep to work in. We had over 60 posts required in the crib wall, and we didn't have sixty days left . It became apparent that this was not going to work. We needed a pile driver. So a few volunteers set to work and came up with a very simple solution consisting of some pipes, some post supports, and a 350-pound weight.
The crane would lift and position the pile driver. The crane had two cable lift lines. The number two line was used to lift the weight. The weight was attached to the cable end with a pelican hook. A lanyard ran from the pelican hook to a crew member who pulled the lanyard to drop the weight. A pointed steel cap was attached to the bottom of each pile. The pile driver was able to drive a four by six post in three or four blows, four feet deep in just a matter of minutes.
If a rock was encountered, it would take an extra two or three blows from the hammer to get through the rock. This would only add a little bit of time but still was at least 20 times faster than hand digging.
Once the crew got in the swing of it the work progressed at a good rate. The finished crib wall was eight to nine feet high and 220 feet long.
Back filling of the crib wall started before the crib wall was finished. Three, one-half yards side dumps were placed on a flat car, loaded with fill soil by a skip loader, and than (sic, then) transported to the washout site. On a good day we were able to make 25 to 27 trips. Our equipment got a real workout as each round trip was about a mile and we would move about 37 yards of soil in a day. The fill then had to be compacted with a wacker to increase the density of the fill. Filler material was placed behind the logs to prevent the soil from being washed out during flooding. As the fill was added, live willow cuttings were placed between the logs.
Once the fill was in place and compacted, the track was ballasted, aligned, leveled and tramped.
The last job to be completed was placing the erosion control jute netting, and planting trees along the top of the fill. It was quite an accomplishment to build three trestles, move and place hundreds of logs, haul and compact hundreds of yards of fill all in a short time period of a little over three months (mid-Aug. through Oct.), and all with SPRR volunteers.
I would like to take this opportunity to give my sincere thanks to all the volunteers that give (sic, gave) so many hours of hard work. Without your assistance, perseverance, and hard work I know we would not have made the deadline to complete the crib wall by October 31. I thank each and every one of you, as well as your spouses and family for letting you give so willingly. Applauds go to the following volunteers: Winferd Burris, Marty and Carol Campbell, Mark Cooper, Doug Debs and his friend Laura, Cosmo DiFrancesco, Bill, Linda and Molly Engelmann, Hart Fairclough, Ken Fischer, Fitz Fitzpactrick, Butch and Bill Floyd, Mac Gaddis, Jan Green, Louis Haughney, Cindy and Steve Huffstetter, Dennis, Debbie and Erick Johnson, Randy Jones, Pete Mc Fall, Andy and Vera Mc Lean, Bill Mc Nab, Richard Mehr, Bob Morehouse, Martha Neilsen, Ken and Maureen Petersen, Anthony, Tony and Marlene-Turner (sic) Pratkanis, Ed Przemielewski, Geoff Tobin, Richard Toulson, Tom Vertel, and Bob Wilkinson.
By Ed Camegie

Erected by Friends of the Swanton Pacific Railroad.

Topics. This historical marker is listed in this topic list: Railroads & Streetcars. A significant historical year for this entry is 1998.

Location. 37° 3.705′ N, 122° 13.677′ W. Marker is near Davenport, California, in Santa Cruz County. Marker can be reached from Stanton Road near Big Creek Road, on the left when traveling north. Touch for map. Marker is at or near this postal address: 297 Swanton Road, Davenport CA 95017, United States of America. Touch for directions.

More about this marker. This marker is located near the Swanton Pacific Railroad boarding platform.