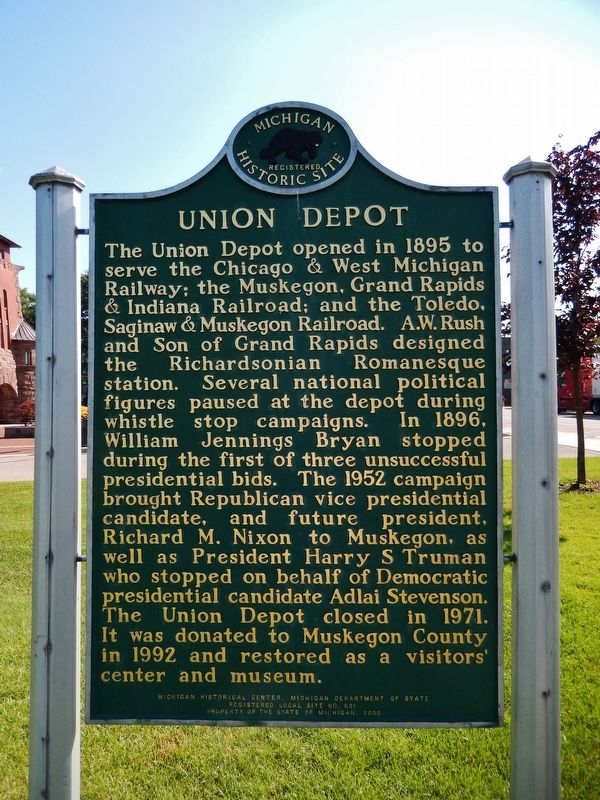 Photographed By Cosmos Mariner, July 28, 2017
1. Union Depot Marker
Inscription.
Union Depot. . , The Union Depot opened in 1895 to serve the Chicago and West Michigan Railway; the Muskegon, Grand Rapids and Indiana Railroad; and the Toledo, Saginaw and Muskegon Railroad. A.W. Rush and Son of Grand Rapids designed the Richardson Romanesque station. Several national political figures paused at the depot during whistle stop campaigns. In 1896, William Jennings Bryan stopped during the first of three unsuccessful presidential bids., The 1952 campaign brought Republican vice presidential candidate, and future president, Richard M. Nixon to Muskegon, as well as President Harry S Truman who stopped on behalf of Democratic presidential candidate Adlai Stevenson. The Union Depot closed in 1971., It was donated to Muskegon County in 1992 and restored as a visitors’ center and museum. . This historical marker was erected in 2000 by Michigan Historical Center and Michigan Department of State. It is in Muskegon in Muskegon County Michigan

It was donated to Muskegon County in 1992 and restored as a visitors’ center and museum.

Topics and series. This historical marker is listed in these topic lists: Government & Politics • Industry & Commerce 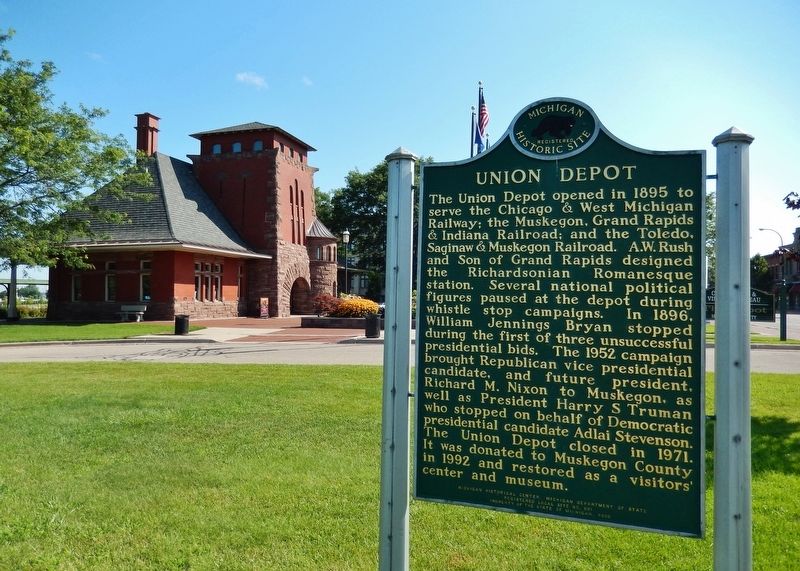 Location. 43° 13.953′ N, 86° 15.489′ W. Marker is in Muskegon, Michigan, in Muskegon County. Marker is on West Western Avenue (U.S. 31) 0.1 miles north of Seventh Street, on the right when traveling north. Marker is located in the grassy plaza between the Union Station Depot and Shoreline Drive (US Highway 31 Business Route). Touch for map. Marker is in this post office area: Muskegon MI 49440, United States of America. Touch for directions.

Regarding Union Depot. In 1871, the Michigan Lake Shore Railroad was built, connecting Muskegon with Chicago. This railroad was 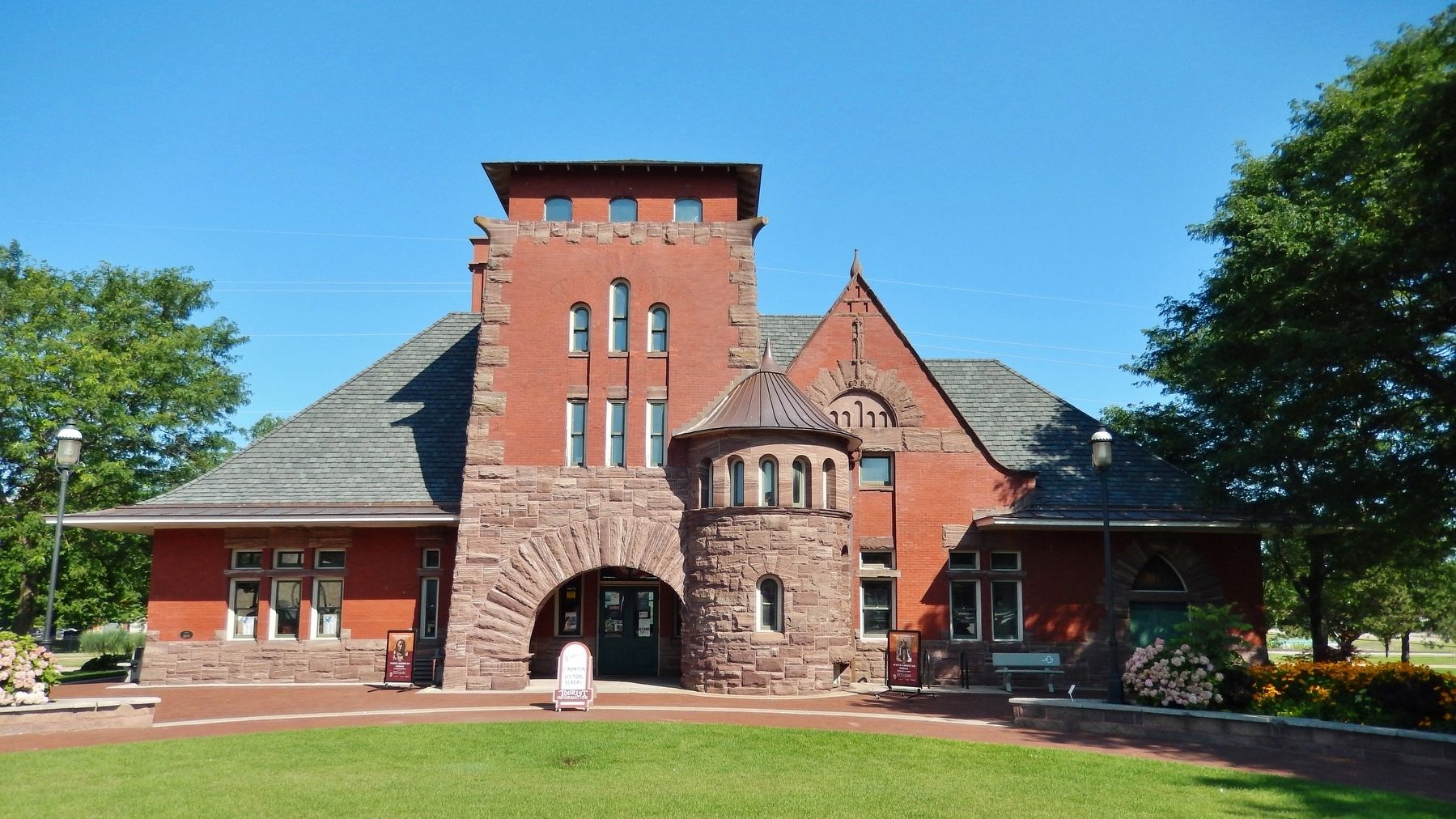 Photographed By Cosmos Mariner, July 28, 2017
3. Union Depot Station
later folded in the Chicago and West Michigan Railroad. In the 1880s, two more rail lines were extended into Muskegon: the Grand Rapids and Indiana Railroad and the Toledo, Saginaw and Muskegon Railway. However, by the early 1890s, the depot located on Third Street was badly in need of refurbishing. In 1893, all three railways and the city agreed that constructing a new depot would be in the best interests of all parties, particularly with the rise in excursion traffic to local resorts.

2. Muskegon Union Station. Detroit website entry
Muskegon was one of many Michigan cities that boomed in the last one-third of the Nineteenth Century because of the state’s white pine forests.  Timber was cut north of Muskegon and then shipped by water or rail to the city for processing.  Lake Muskegon provided a very safe harbor so Muskegon became a significant port when water was the most economical way to ship throughout the Great Lakes region.  At one point in the decades after the Civil War, Muskegon had 47 mills processing lumber. The success of those mills and the skilled craftsmen working in them led the city to become a vibrant manufacturing hub turning out a great variety of products including some you would not expect to find there.  (Submitted on August 19, 2017, by Cosmos Mariner of Cape Canaveral, Florida.) 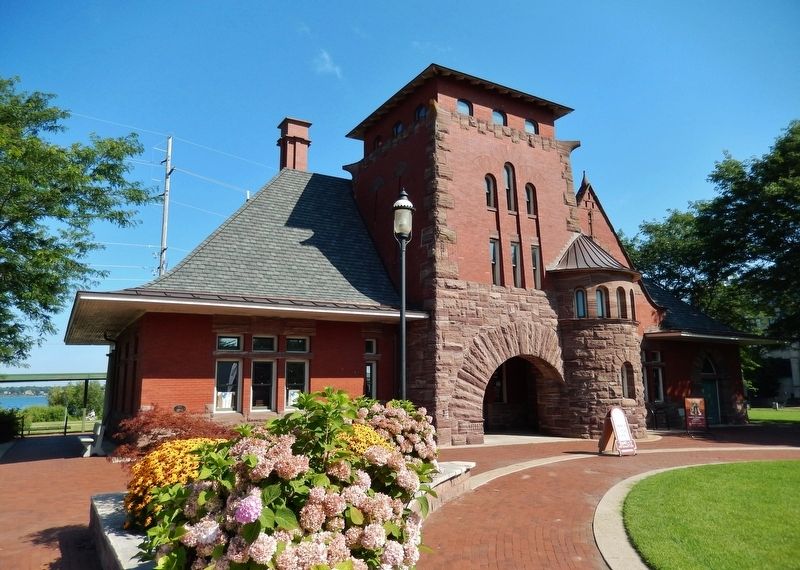 3. Grand Rapids & Indiana Railroad. Railroad Michigan website entry
The original line ran from Richmond In. to Mackinaw City, where they interchanged with the DSS&A (Soo Line) via the Chief Wawatam carferry. The GR&I was eventually absorbed by the Pennsylvania Railroad. Noted for their vacation passenger service, the last of which ran in 1961. (Submitted on August 19, 2017, by Cosmos Mariner of Cape Canaveral, Florida.)

4. Toledo, Saginaw & Muskegon Railway. Trainweb website entry
The Toledo, Saginaw & Muskegon was organized in the interest of the Toledo, Ann Arbor & North Michigan Railway.  The railroad was started by a group of Toledo Ohio investors headed by David Robinson Jr. and James Ashley, Jr. who at the time was also building the Toledo, Ann Arbor and North Michigan Railroad, which connected Ashley with Owosso, Michigan. (Submitted on August 19, 2017, by Cosmos Mariner of Cape Canaveral, Florida.) 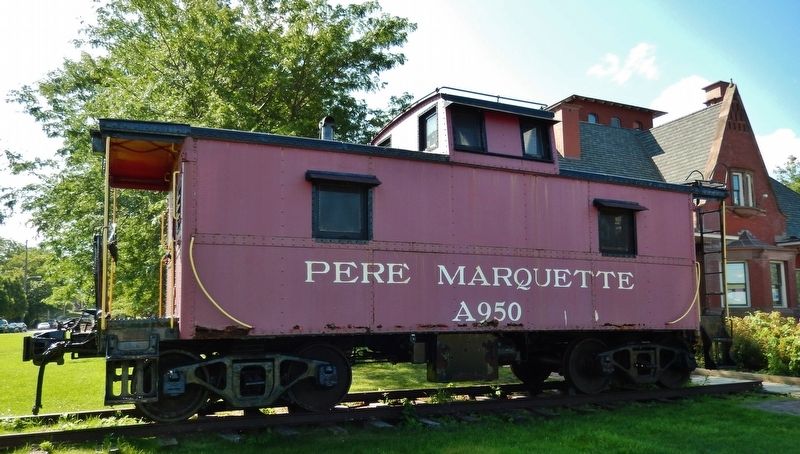