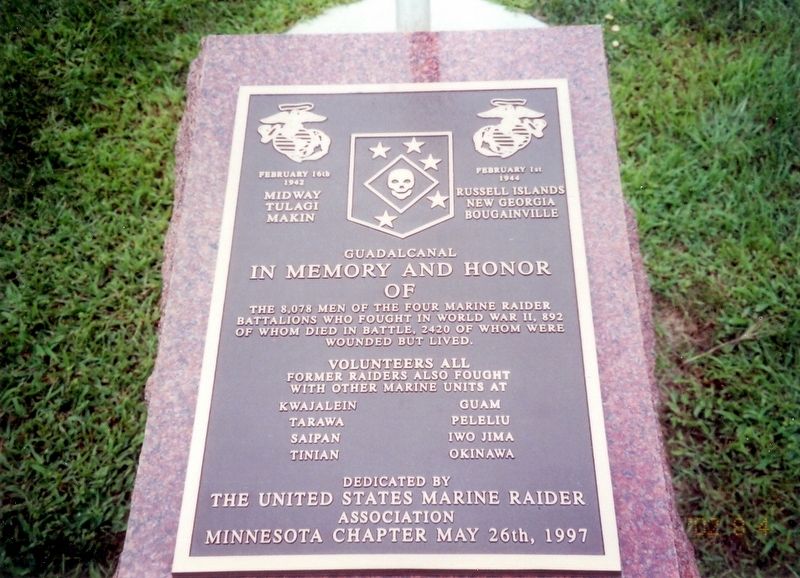 Dedicated by the United States Marine Raider Association, Minnesota Chapter May 26, 1997. . This memorial was erected in 1997. It is in Minneapolis in Hennepin County Minnesota

February 16th 1942 Midway, Tulagi, Makin; February 1st 1944 Russell Islands, New Georgia, Bouganville. Guadacanal-In Memory and Honor of the 8,078 men of the four Marine Raider battalions who fought in World War II, 892 of whom died in battle, 2420 of whom were wounded but lived.

Location. 44° 52.004′ N, 93° 13.261′ W. Marker is in Minneapolis, Minnesota, in Hennepin County. Memorial is on Rosewald Street. The marker is on Rosewald Street within the Fort Snelling National Cemetery. Touch for map. Marker is at or near this postal address: 7601 34th Avenue South (Cemetery entrance), Minneapolis MN 55450, United States of America. Touch for directions.

Other nearby markers. At least 8 other markers are within 3 miles of this marker, measured as the crow flies. Fourth Marine Division Memorial (about 300 feet away, measured in a direct line); 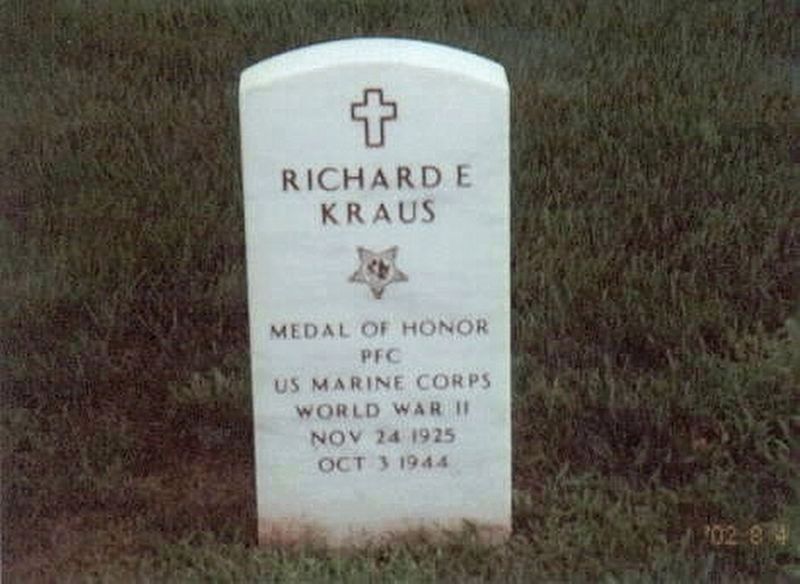 By Don Morfe, August 4, 2002
2. Richard E Kraus-World War II Congressional Medal of Honor Recipient
He is buried in Fort Snelling National Cemetery, Section DS site 61A. He was Killed in Action. His Medal of Honor information and citation is: *KRAUS, RICHARD EDWARD • Rank and organization: Private First Class, U.S. Marine Corps Reserve Citation: For conspicuous gallantry and intrepidity at the risk of his life above and beyond the call of duty while serving with the 8th Amphibious Tractor Battalion, Fleet Marine Force, in action against enemy Japanese forces on Peleliu, Palau Islands, on 5 October 1944. Unhesitatingly volunteering for the extremely hazardous mission of evacuating a wounded comrade from the front lines, Pfc. Kraus and 3 companions courageously made their way forward and successfully penetrated the lines for some distance before the enemy opened with an intense, devastating barrage of hand grenades which forced the stretcher party to take cover and subsequently abandon the mission. While returning to the rear, they observed 2 men approaching who appeared to be marines and immediately demanded the password. When, instead of answering, 1 of the 2 Japanese threw a hand grenade into the midst of the group, Pfc. Kraus heroically flung himself upon the grenade and, covering it with his body, absorbed the full impact of the explosion and was instantly killed. By his prompt action and great personal valor in the face of almost certain death, he saved the lives of his 3 companions, and his loyal spirit of self-sacrifice reflects the highest credit upon himself and the U.S. Naval Service. He gallantly gave his life for his comrades.
1st Infantry Division (about 500 feet away); Rodney J. Putz (approx. 1.3 miles away); Fort Snelling 1861–1946 (approx. 1.9 miles away); Mendota Work Camp No. 1 (approx. 2.4 miles away); Whiskey (approx. 2½ miles away); Elizabeth R. Snelling (approx. 2½ miles away); Giacomo Constantino Beltrami (approx. 2½ miles away). Touch for a list and map of all markers in Minneapolis. 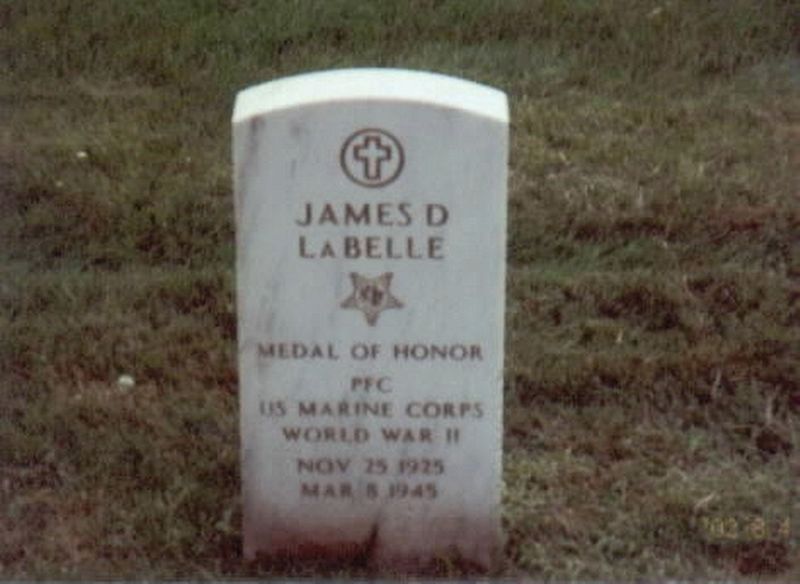 By Don Morfe, August 4, 2002
3. James D. LaBelle-World War II Congressional Medal of Honor Recipient
He is buried in Fort Snelling National Cemetery, Section B1, site 422-S. He was Killed in Action. His Medal of Honor information and citation is: *LA BELLE, JAMES DENNIS • Rank and organization: Private First Class, U.S. Marine Corps Reserve Citation: For conspicuous gallantry and intrepidity at the risk of his life above and beyond the call of duty while attached to the 27th Marines, 5th Marine Division, in action against enemy Japanese forces during the seizure of Iwo Jima in the Volcano Islands, 8 March 1945. Filling a gap in the front lines during a critical phase of the battle, Pfc. LaBelle had dug into a foxhole with 2 other marines and, grimly aware of the enemy's persistent attempts to blast a way through our lines with hand grenades, applied himself with steady concentration to maintaining a sharply vigilant watch during the hazardous night hours. Suddenly a hostile grenade landed beyond reach in his foxhole. Quickly estimating the situation, he determined to save the others if possible, shouted a warning, and instantly dived on the deadly missile, absorbing the exploding charge in his own body and thereby protecting his comrades from serious injury. Stouthearted and indomitable, he had unhesitatingly relinquished his own chance of survival that his fellow marines might carry on the relentless fight against a fanatic enemy His dauntless courage, cool decision and valiant spirit of self-sacrifice in the face of certain death reflect the highest credit upon Pfc. LaBelle and upon the U.S. Naval Service. He gallantly gave his life in the service of his country. 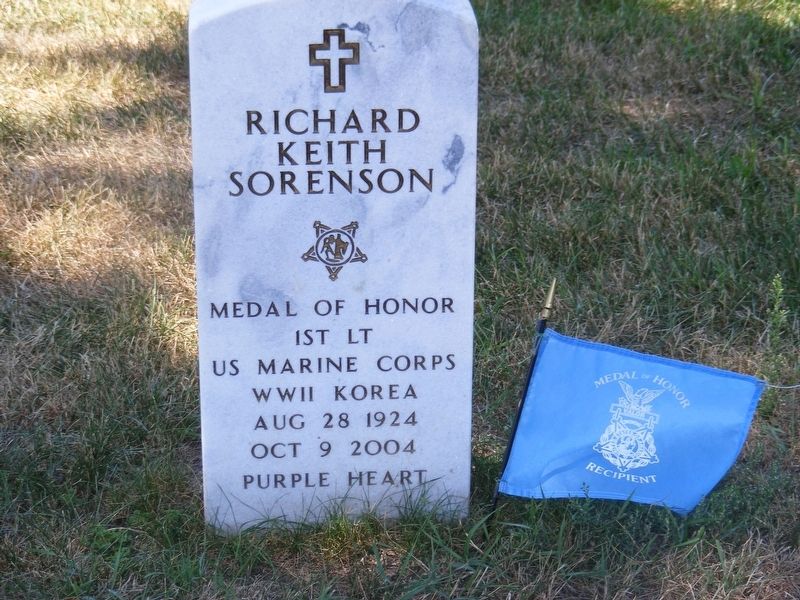 By Don Morfe, August 25, 2008
4. Richard Keith Sorenson-World War II Congressional Medal of Honor Recipient
He is buried in Fort Snelling National Cemetery, Section B, site 149-1. His Medal of Honor information and citation is: SORENSON, RICHARD KEITH • Rank and organization: Private, U.S. Marine Corps Reserve, 4th Marine Division • Place and date: Namur Island, Kwajalein Atoll Marshall Islands, 1 -2 February 1944 • Entered service at: Minnesota Citation: For conspicuous gallantry and intrepidity at the risk of his life above and beyond the call of duty while serving with an assault battalion attached to the 4th Marine Division during the battle of Namur Island, Kwajalein Atoll, Marshall Islands, on 1-2 February 1944. Putting up a brave defense against a particularly violent counterattack by the enemy during invasion operations, Pvt. Sorenson and 5 other marines occupying a shellhole were endangered by a Japanese grenade thrown into their midst. Unhesitatingly, and with complete disregard for his own safety, Pvt. Sorenson hurled himself upon the deadly weapon, heroically taking the full impact of the explosion. As a result of his gallant action, he was severely wounded, but the lives of his comrades were saved. His great personal valor and exceptional spirit of self-sacrifice in the face of almost certain death were in keeping with the highest traditions of the U.S. Naval Service. top
Credits. This page was last revised on August 24, 2017. It was originally submitted on August 22, 2017, by Don Morfe of Baltimore, Maryland. This page has been viewed 152 times since then and 11 times this year. Photos:   1, 2, 3, 4. submitted on August 22, 2017, by Don Morfe of Baltimore, Maryland. • Bill Pfingsten was the editor who published this page.
Share This Page.