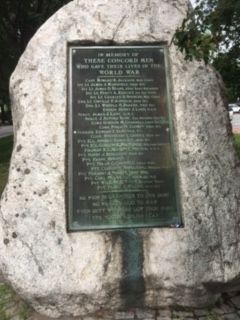 Erected by The Town of Concord Mass.

Location. 42° 27.638′ N, 71° 20.938′ W. Marker is in Concord, Massachusetts, in Middlesex County. Memorial is on Monument Square: Lexington Road, in the median. Monument is located in what is known locally as Monument Square in the town green of Concord, Massachusetts. Touch for map. Marker is in this post office area: Concord MA 01742, United States of America. Touch for directions.