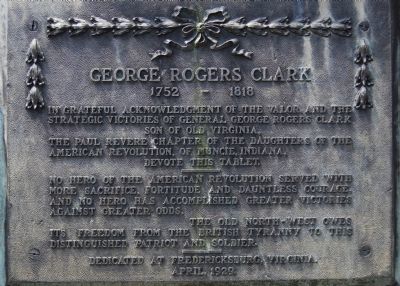 In grateful acknowledgement of the valor and the strategic victories of General George Rogers Clark, Son of Old Virginia, the Paul Revere Chapter of the Daughters of the American Revolution of Muncie, Indiana, devote this tablet.

No hero of the American Revolution served with more sacrifice, fortitude and dauntless courage, and no hero has accomplished greater victories against greater odds.

The old North-West owes its freedom from the British tyranny to this distinguished patriot and soldier.

Erected 1929 by the Paul Revere Chapter of the Daughters of the American Revolution of Muncie, Indiana.

Topics and series. This historical marker is listed in this topic list: War, US Revolutionary. In addition, it is included in the Daughters of the American Revolution (DAR) series list. A significant historical year for this entry is 1929. 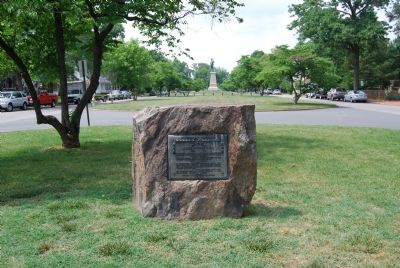 Click or scan to see
this page online
the median on Washington Avenue. Touch for map. Marker is in this post office area: Fredericksburg VA 22401, United States of America. Touch for directions.

Additional commentary.
1. Why is This Monument in Fredericksburg?
Does anyone know what association George Rogers Clark had with Fredericksburg? He was born near Charlottesville 70 miles west, grew up in southwestern Caroline County, some 40 miles south and closer to Richmond, and became famous for his exploits on the western frontier (Kentucky, Indiana, Illinois). He died in Kentucky. The Daughters of the American Revolution’s Muncie Indiana chapter that commissioned this marker came all the way to Fredericksburg for a reason. Perhaps it was just because Fredericksburg was close enough to Caroline County?
— Submitted June 5, 2007, by J. J. Prats of Powell, Ohio.
Credits. This page was last revised on September 26, 2021. It was originally submitted on June 4, 2007, by Dawn Bowen of Fredericksburg, Virginia. This page has been viewed 3,156 times since then and 79 times this year. Photos:   1, 2. submitted on June 4, 2007, by Dawn Bowen of Fredericksburg, Virginia. • J. J. Prats was the editor who published this page.
Share this page.