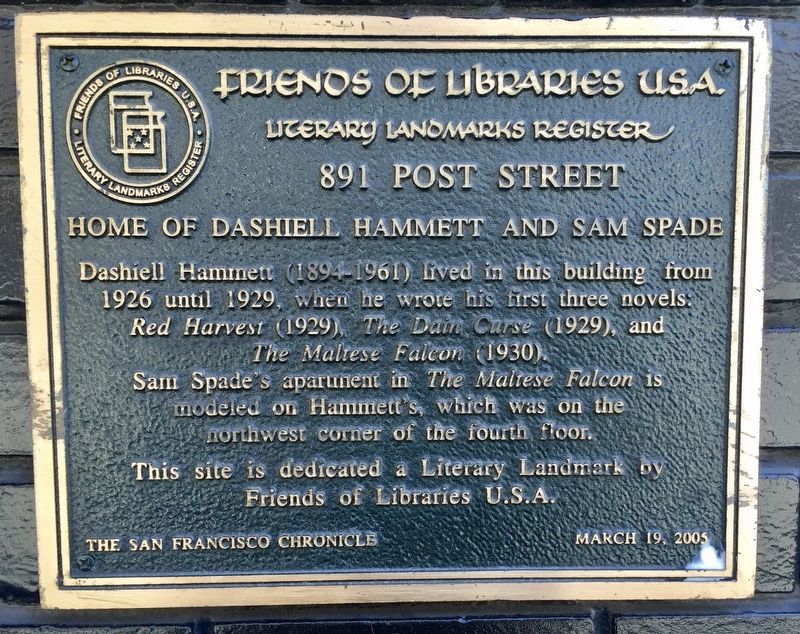 By Andrew Ruppenstein, June 6, 2017
1. 891 Post Street Marker
Inscription.
891 Post Street. Literary Landmarks Register. Home of Dashiell Hammett and Sam Spade. Dashiell Hammett (1894-1961) lived in this building from 1926 until 1929, when he wrote his first three novels: Red Harvest (1929), The Dain Curse (1929), and The Maltese Falcon (1930).. Sam Spade's apartment in The Maltese Falcon is modeled on Hammett's, which was on the northwest corner of the fourth floor.. This site is dedicated a Literary Landmark by Friends of Libraries U.S.A. . . This historical marker was erected in 2005 by Friends of Libraries U.S.A., San Francisco Chronicle. It is in San Francisco in San Francisco City and County California

Sam Spade's apartment in The Maltese Falcon is modeled on Hammett's, which was on the northwest corner of the fourth floor.

This site is dedicated a Literary Landmark by Friends of Libraries U.S.A.

Topics. This historical marker is listed in this topic list: Arts, Letters, Music. A significant historical year for this entry is 1926.

Other nearby markers. At least 8 other markers are within walking distance of this marker. 851 O'Farrell Street (approx. 0.2 miles away); Blanco's Café & Music Box 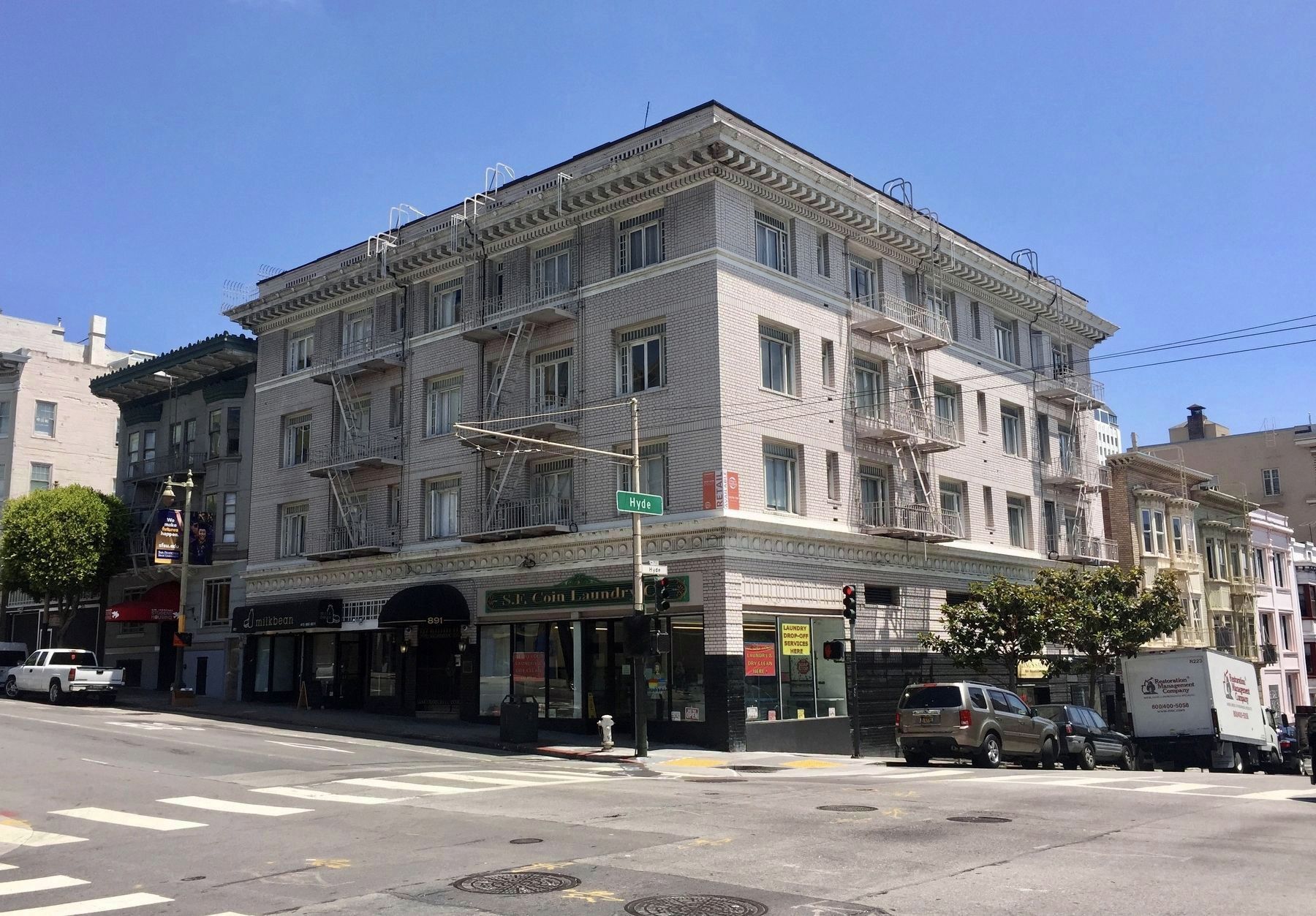 By Andrew Ruppenstein, September 14, 2017
2. 891 Post Street Marker - Wide View
The marker is barely visible here, mounted to the right of the door below the awning reading "891".

Hammett's apartment is on the top floor, on the right-hand corner of the Post Street side of the building.

Also see . . .
1. Dashiell Hammett (Wikipedia). Samuel Dashiell Hammett (May 27, 1894 – January 10, 1961) was an American author of hard-boiled detective novels and short stories, screenwriter, and political activist. Among the enduring characters he created are Sam Spade (The Maltese Falcon), Nick and Nora Charles (The Thin Man), and the Continental Op (Red Harvest and The Dain Curse).... Hammett "is now widely regarded as one of the finest mystery writers of all time". In his obituary in The New York Times, he was described as "the dean of the... 'hard-boiled' school of detective fiction." Time magazine included Hammett's 1929 novel Red Harvest on its list of the 100 best English-language novels published between 1923 and 2005. His novels and stories also had a significant influence on films, 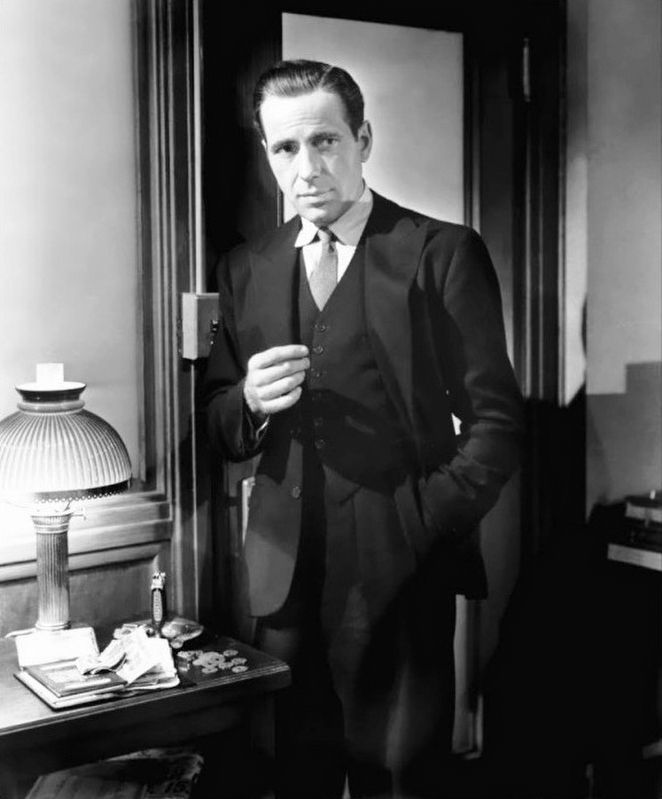 circa 1940
3. Sam Spade, as played by Humphrey Bogart
including (but not limited to) the genres of private-eye/detective fiction, mystery thrillers and film-noir. (Submitted on September 15, 2017.)

2. Dashiell Hammett's San Francisco (YouTube, 91 minutes). Curator/writer Brad Rosenstein took us down the foggy mean streets of Dashiell Hammett's San Francisco, exploring how the city and the writer combined to shape each other's myths and produce some iconic American fiction -- and some classic movies as well. Rosenstein, whose last presentation here focused on Ernest Hemingway, is developing an enthusiastic following for his unique, multi-media programs on larger-than-life cultural figures. 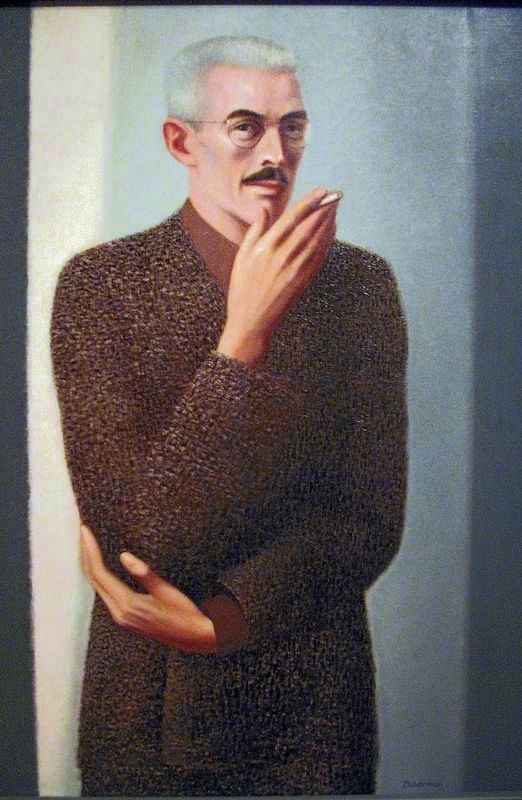 “Inspired to try his hand at writing mysteries after his years with the Pinkerton Detective Agency, Dashiell Hammett met a warm reception when he published his first two detective novels in 1929. But it was the appearance of The Maltese Falcon, a year later that secured him his reputation as one of America's most original mystery writers. The hardbitten realism and crisp dialogue of that work led critics to compare its author's style to that of Ernest Hemingway. Hammett's later books, The Thin Man and The Glass Key, drew similar accolades. In defining the main difference between Hammett's works and the far more common drawing-room detective stories of the period, one admirer observed that Hammett had taken murder ‘out of the Venetian vase and dropped it into the alley,’ where, after all, it more generally occurred in real life.” — National Portrait Gallery
Credits. This page was last revised on September 16, 2017. It was originally submitted on September 15, 2017, by Andrew Ruppenstein of Sacramento, California. This page has been viewed 189 times since then and 13 times this year. Photos:   1, 2, 3. submitted on September 15, 2017, by Andrew Ruppenstein of Sacramento, California.   4. submitted on September 15, 2017, by Allen C. Browne of Silver Spring, Maryland.
Share This Page.