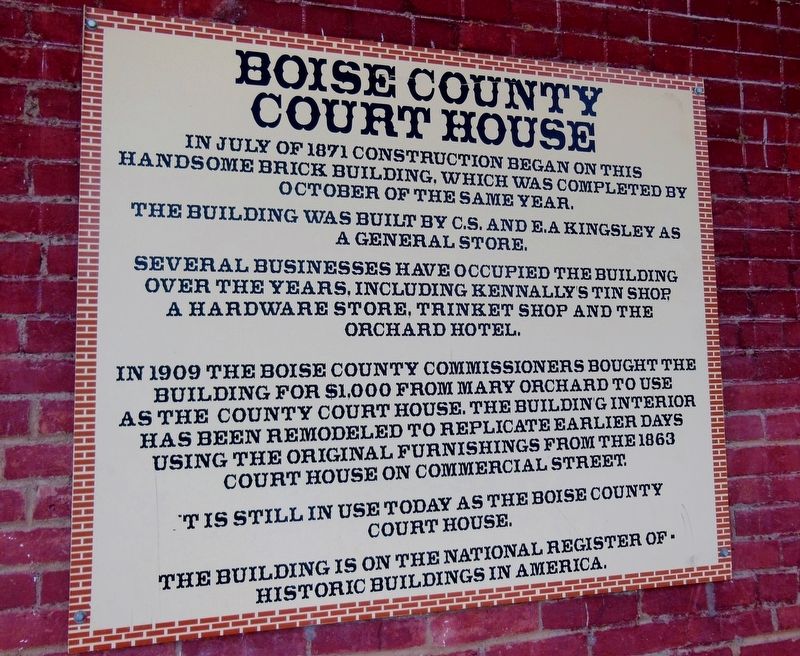 In July of 1871 construction began on this handsome brick building, which was completed by October of the same year.

The building was built by C.S. and E.A. Kingsley as a general store.

Several businesses have occupied this building over the years, including Kennally’s Tin Shop, a hardware store, trinket shop and the Orchard Hotel.

In 1909 the Boise County Commissioners bought the building for $1,000 from Mary Orchard to use as the County Court House. The building interior has been remodeled to replicate earlier days using the original furnishings from the 1863 Court House on Commercial Street.

It is still in use today as the Boise County Court House.

The building is on the National Register of Historic Buildings in America.

Topics. This historical marker is listed in this topic list: Notable Buildings. A significant historical year for this entry is 1871. 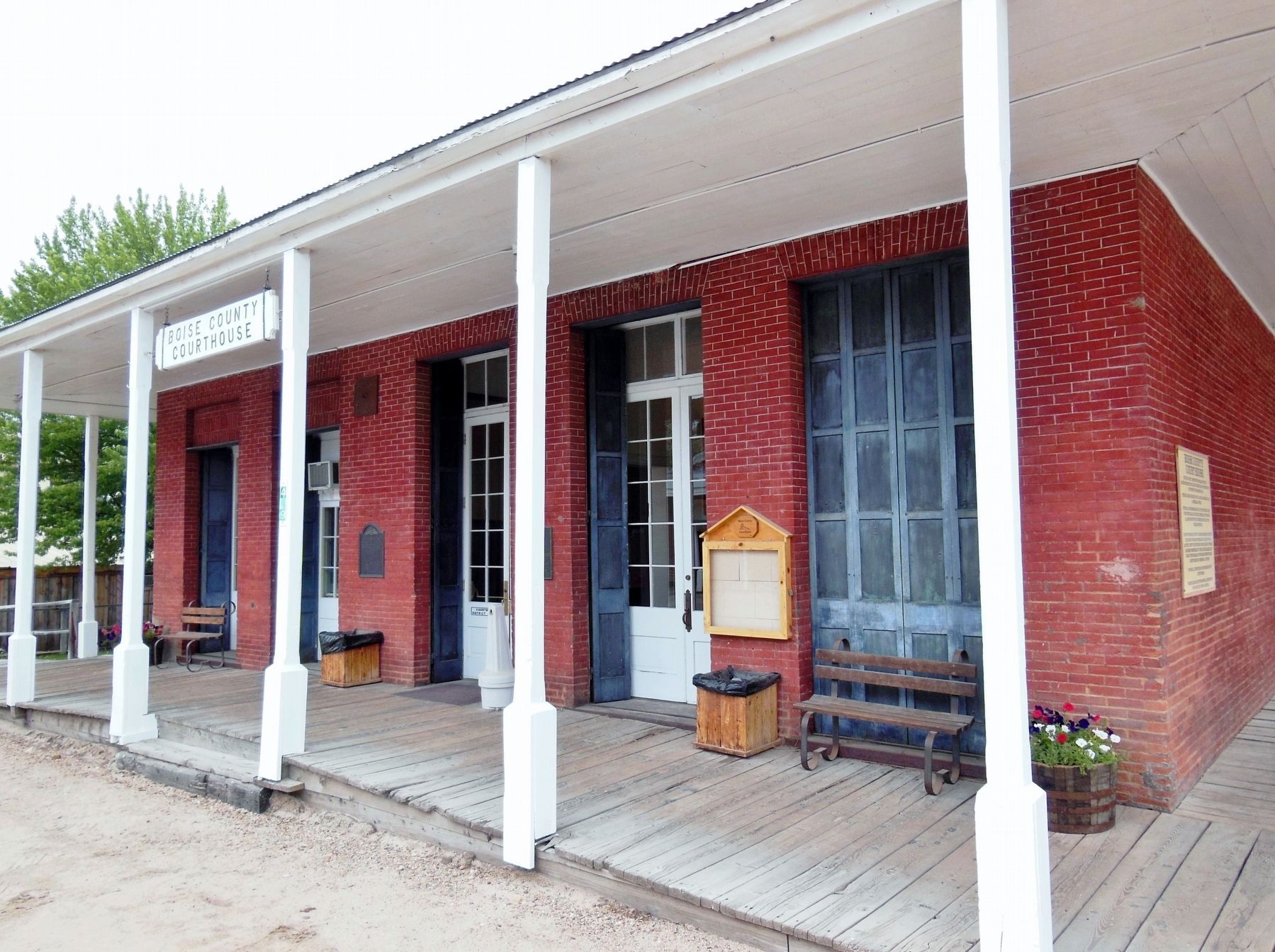 Click or scan to see
this page online
. Marker is mounted on northeast corner outside wall of subject courthouse building, facing Wall Street. Touch for map. Marker is in this post office area: Idaho City ID 83631, United States of America. Touch for directions.

More about this marker. Large wooden marker in good condition

Also see . . .
1. Historic Idaho CIty.
This building was begun in July of 1871 and completed three months later. This was no small task considering the degree of fire protection employed. The great iron folding doors, each weighing half a ton, were made in San Francisco, barged up the Columbia River, and carried overland by horse and ox teams. Three feet of packed earth filled the attic space, once estimated to weight about 200 tons. Local clay bricks and mortar finished the walls. It began as a general store, then a hardware and trinket shop, and then became the Orchard Hotel. The original courthouse on Montgomery Street was deteriorating, 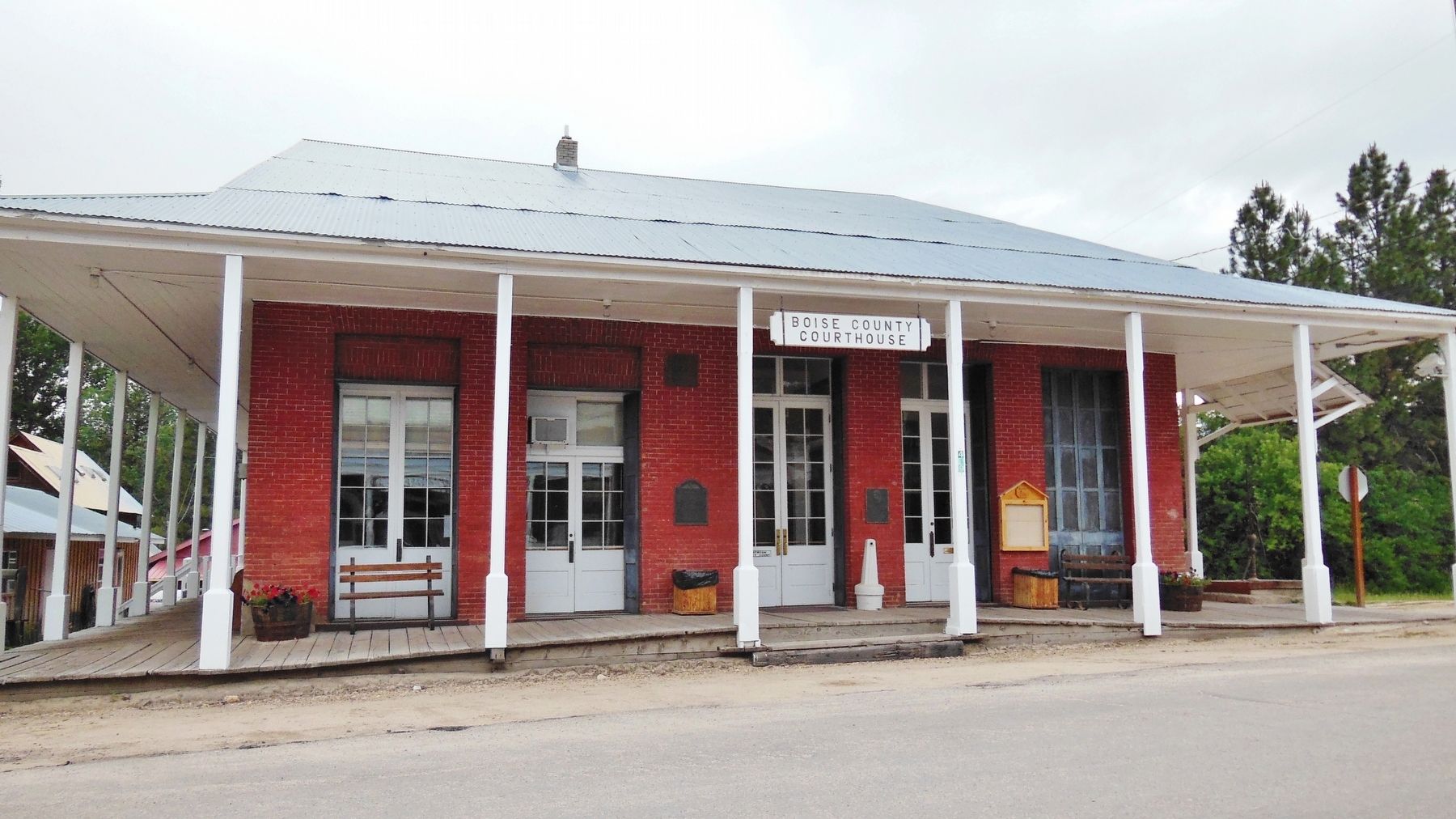 Photographed By Cosmos Mariner, June 21, 2013
3. Boise County Courthouse
and during Mose Kempner’s trial it became obvious there was need for a new one. It had been built with enough room between the floorboards to accommodate tobacco chewers, but Kempner reportedly chewed up and spit out a note that was being passed around as evidence against him. Hence the county bought the Orchard Hotel in 1909. The building’s interior has been remodeled to replicate those earlier days and court is still in session several days a week. (Submitted on November 12, 2017, by Cosmos Mariner of Cape Canaveral, Florida.)

2. U.S. Senator Frank Church.
In 1976 Church sought the nomination for the Democratic candidacy for president. He won primaries in Nebraska, Idaho, Oregon and Montana, but eventually decided to withdraw in favor of Jimmy Carter. Church's outspoken views made him a lot of enemies and in 1980 was defeated in his attempt to be elected to the Senate for a fifth term. (Submitted on November 12, 2017, by Cosmos Mariner of Cape Canaveral, Florida.) 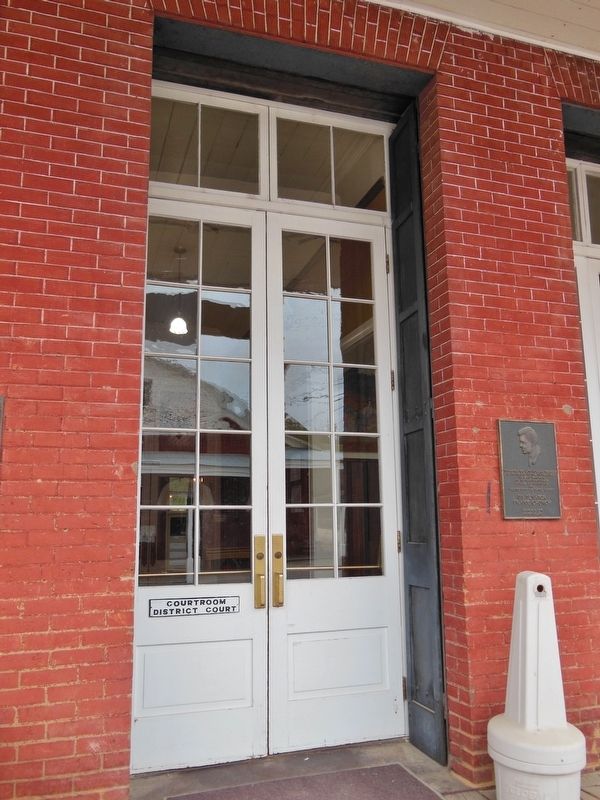 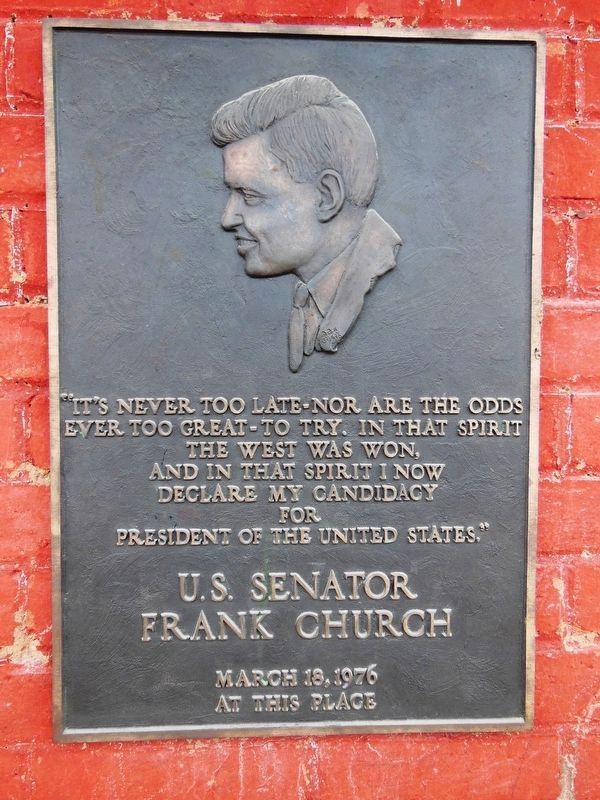 Photographed By Cosmos Mariner, June 21, 2013
5. Senator Frank Church Tablet (mounted right side entrance doorway)
“It’s never too late – nor are the odds ever too great – to try. In that spirit the West was Won, and in that spirit I now declare my candidacy for President of the United States.” 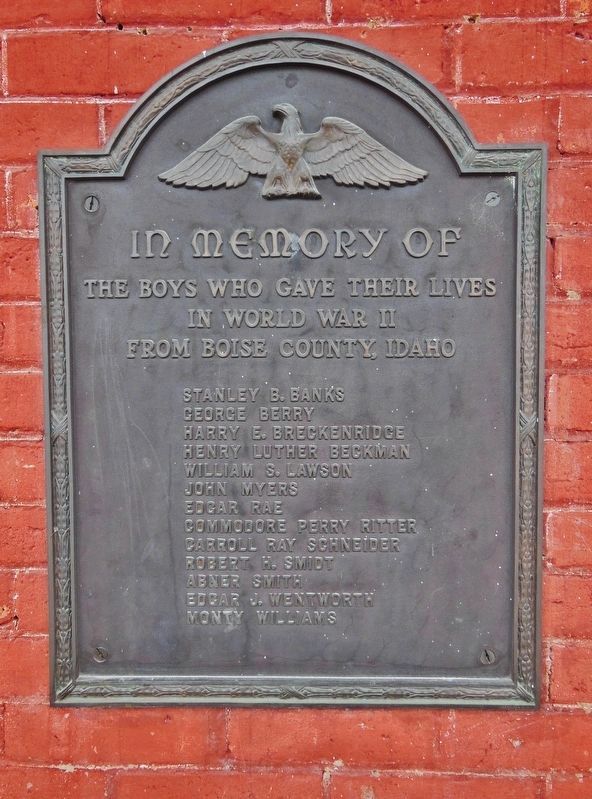