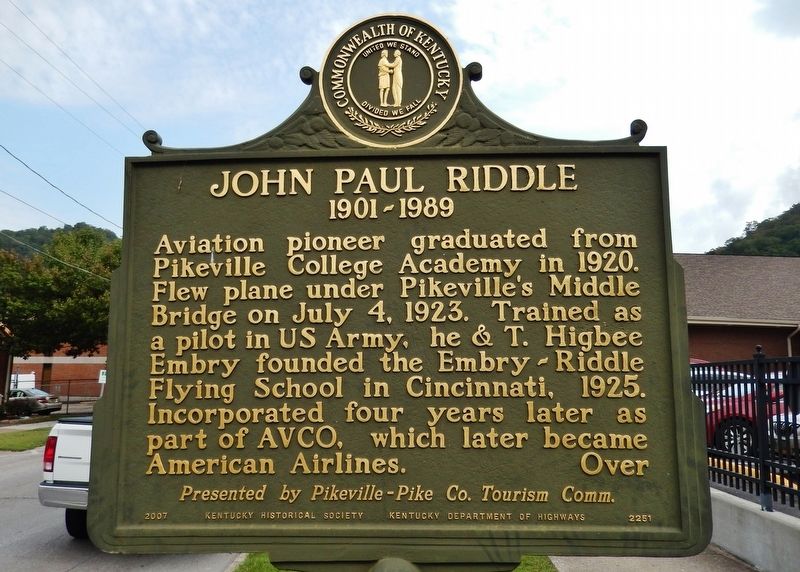 (side 1)
Aviation pioneer graduated from Pikeville College Academy in 1920. Flew plane under Pikesville’s Middle Bridge on July 4, 1923. Trained as a pilot in US Army, he & T. Higbee Embry founded the Embry-Riddle Flying School in Cincinnati, 1925. Incorporated four years later as part of AVCO, which later became American Airlines.
Over

Topics and series. This historical marker is listed in these topic lists: Air & Space • Industry & Commerce. In addition, it is included in the Kentucky Historical Society series list. 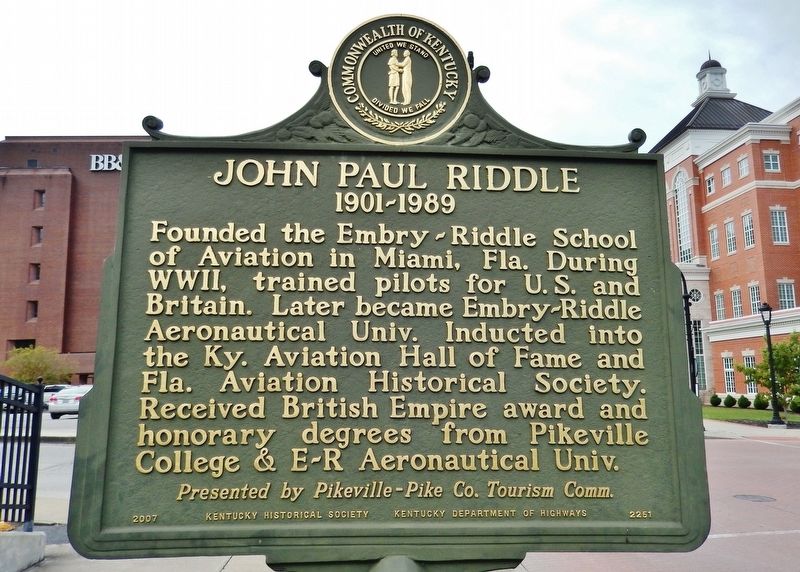 Click or scan to see
this page online
37° 28.826′ N, 82° 31′ W. Marker is in Pikeville, Kentucky, in Pike County. Marker is at the intersection of Main Street and Pike Street, on the right when traveling north on Main Street. Marker is located near the sidewalk, adjacent to Main Street, beside the Main Street Church of Christ parking lot. Touch for map. Marker is at or near this postal address: 198 Main Street, Pikeville KY 41501, United States of America. Touch for directions.

Also see . . .
1. John Paul Riddle.
John Paul Riddle was born in 1901. He was only an infant when the Wright brothers made their historic flight, but his life would be changed forever by aviation, and he in turn would change the lives of others through flying. Riddle developed a fascination with flight from a young age. He graduated from Pikeville College in 1920 and soon started performing daredevil flight tricks for local viewers’ entertainment. Riddle soon took his flying skills to the US Army Air Corps, 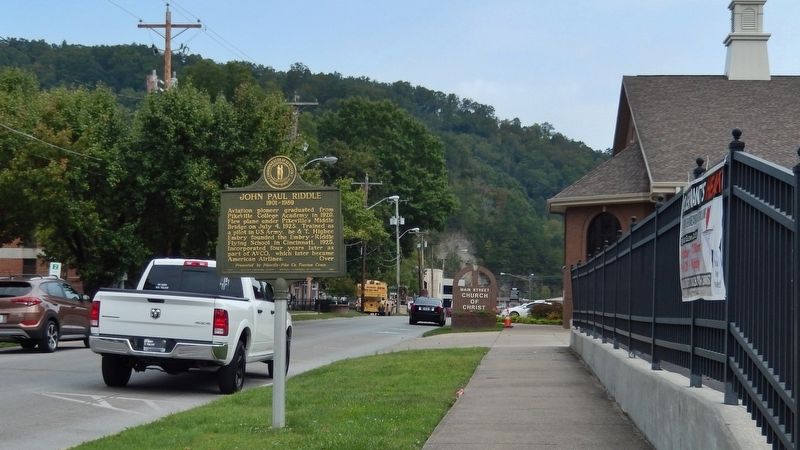 By Cosmos Mariner, September 21, 2017
3. John Paul Riddle Marker (side 1)
where he earned his flying wings. (Submitted on November 14, 2017, by Cosmos Mariner of Cape Canaveral, Florida.)

2. John Paul Riddle.
Formerly a barnstormer and flying instructor for stunt pilots, John Paul Riddle was a pioneer in aviation history taking the controls only 17 years after the Wright brothers’ first flight. His career in aviation had taken him from the Embry-Riddle Flying School in 1926, winning the first Federal air mail contracts, to globe-trotting with Howard Hughes and the Prince of Wales. In 1934 he opened a charter seaplane service in Miami and in WW2 operated three schools in Florida and one in Tennessee for US and UK pilots. (Submitted on November 14, 2017, by Cosmos Mariner of Cape Canaveral, Florida.)

3. Daring young men in their flying trapezes. By the end of his long career, John Paul Riddle (1901-1989) had received the British Empire award and been inducted into the Kentucky Aviation Hall of Fame and the Florida Aviation Historical Society. But on July 4, 1923 the Pikeville, KY native and ex-Army airman was busy flying his Jenny under the town’s Middle Bridge and barnstorming his way across the countryside. (Submitted on November 14, 2017, by Cosmos Mariner of Cape Canaveral, Florida.) 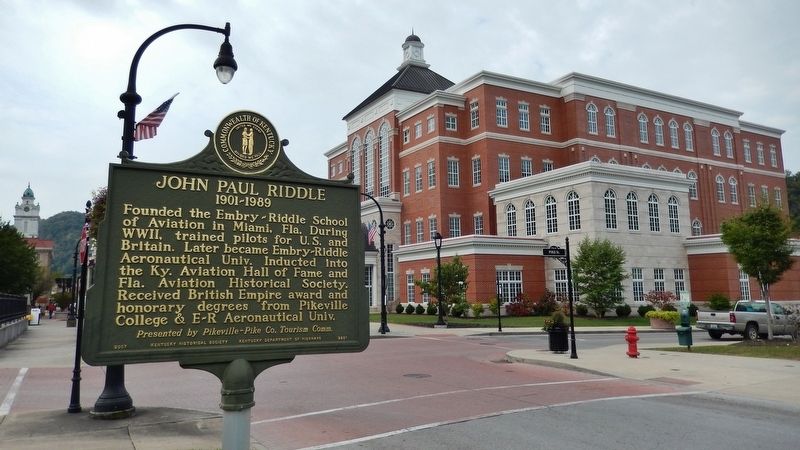