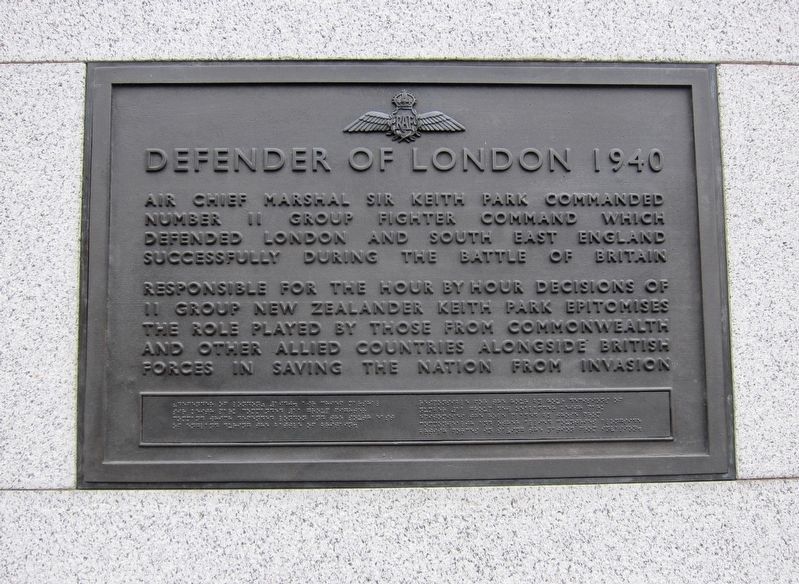 Responsible for the hour by hour decisions of 11 Group New Zealander Keith Park epitomises the role played by those from Commonwealth and other allied countries alongside British forces in saving the nation from invasion . This historical marker was erected in 2010. It is in City of Westminster in Greater London County England United Kingdom

Location. 51° 30.401′ N, 0° 7.953′ W. Marker is in City of Westminster, England, in Greater London County. Memorial is at the intersection of Waterloo Place and Pall Mall, on the left when traveling north on Waterloo Place. Touch for map. Marker is at or near this postal address: 107 Pall Mall, City of Westminster, England SW1Y 5ER, United Kingdom. Touch for directions. 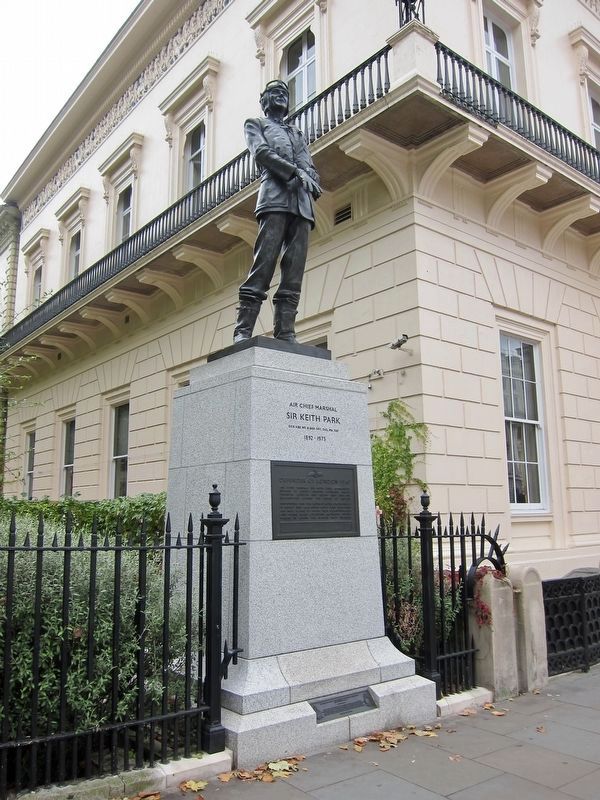 Also see . . .
1. Keith Park (Wikipedia). Air Chief Marshal Sir Keith Rodney Park, GCB, KBE, MC & Bar, DFC (15 June 1892 – 6 February 1975) was a New Zealand soldier, First World War flying ace and Second World War Royal Air Force commander. He was in operational command during two of the most significant air battles in the European theatre in the Second World War, helping to win the Battle of Britain and the Battle of Malta. In Germany, he was supposedly known as "the Defender of London". (Submitted on December 5, 2017.) 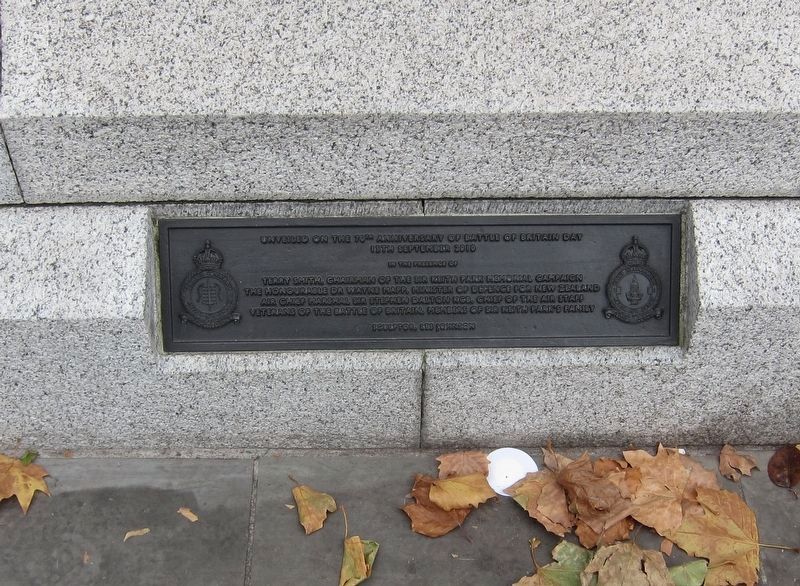 By Andrew Ruppenstein, October 13, 2017
3. Air Chief Marshal Sir Keith Park (1892 - 1975) Marker Dedication Plaque
Unveiled on the 70th Anniversary of the Battle of Britain Day, 15th September 2010
Second World War, in which the Royal Air Force (RAF) defended the United Kingdom (UK) against large-scale attacks by the German Air Force (Luftwaffe). It has been described as the first major military campaign fought entirely by air forces....The British officially recognise the battle's duration as being from 10 July until 31 October 1940, which overlaps the period of large-scale night attacks known as the Blitz, that lasted from 7 September 1940 to 11 May 1941. German historians do not accept this subdivision and regard the battle as a single campaign lasting from July 1940 to June 1941, including the Blitz. (Submitted on December 5, 2017.)
Credits. This page was last revised on December 5, 2017. It was originally submitted on December 5, 2017, by Andrew Ruppenstein of Sacramento, California. This page has been viewed 154 times since then and 16 times this year. Photos:   1, 2, 3. submitted on December 5, 2017, by Andrew Ruppenstein of Sacramento, California.
Share This Page.